The Global In-Game Advertising Market size is expected to reach $12.1 billion by 2028, rising at a market growth of 10.1% CAGR during the forecast period. 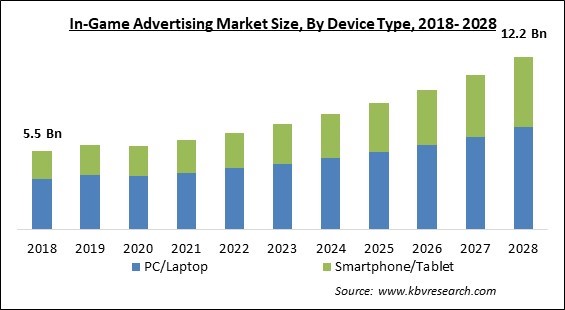 Static IGAs, like product placement in movies, can't be modified once they've been coded into the game unless it's online. In contrast to traditional media, IGA enables gamers to engage with the virtual product. For example, In Splinter Cell, catching terrorists requires the use of in-game Sony Ericsson phones. Dynamic IGAs, unlike static IGAs, are not limited to a pre-programmed size or location defined by the developer and publisher and allow the advertiser to modify the advertisement display. To make a realistic gaming world, a number of games use billboard-like adverts or product placement. Many sports games include these adverts to mimic the massive advertising seen in professional sports.

IGA and advergaming have been widely accepted by the advertising industry as successful strategies to reach people aged 16 to 34. IGA is viewed as a key tool for reaching out to a generation of young boys who prefer to relax by playing video games rather than watching television. IGA is a specialty of several advertising firms or ad networks, and even more than conventional advertising agencies.

The COVID-19 pandemic is disrupting a number of businesses, including digital advertising. Businesses are rethinking their marketing strategy in light of the COVID-19 outbreak and discussing if now is the ideal time to run internet ads. COVID-19 has a favorable impact on the in-game advertising market because most end users now utilize digital devices to access the internet, and with the conclusion of the pandemic unknown, many businesses are preparing to move the advertising investments to digital platforms. Greater technology improvements, as well as growing consumer hours invested in internet gaming, are predicted to propel the in-game advertisement market.

Higher investment for in-game advertising and rising usage of internet

With the increased availability of fast and low-cost internet services, the internet is becoming more widely used. The internet is the most revolutionary and rapidly evolving technology. With the widespread use of cell phones for gaming purposes, internet penetration has increased. The number of internet users has grown in latest years. Over the past couple of years, many people have gone online for the first time each day.

Higher expenses and a dearth of creativity among game developer

Even if the cost of developing mobile games has fallen, averaging and mobile advertising deliver a costly campaign. Averaging games must employ novel tactics in order to develop interest and provide uniqueness in the game, which will set it apart from other games on the market. This will hold the player's interest for a longer period of time. This is due to the link between the two, the game generated must be pushed to improve awareness of the game, which will also inform people about the product. 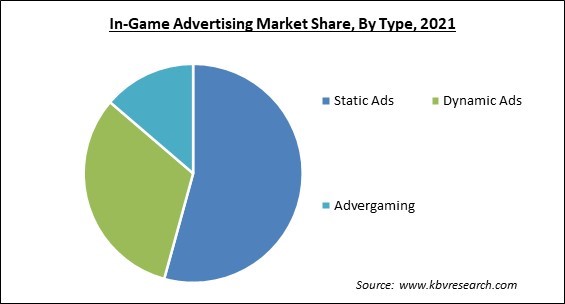 Based on the Device Type, the In-Game Advertising Market is bifurcated into PC/Laptop and Smartphone/Tablet. The Smartphone/Tablet garnered a significant revenue share in the In-Game Advertising market in 2021. These gadgets is highly popular among the young and employed population. This is because smartphones are portable i.e., easy to carry and simple to handle. Manufacturers of smartphones are making changes in order to make it more user friendly as well as beneficial for game developer and advertising agency.

Based on the Type, the In-Game Advertising Market is divided into Static Ads, Dynamic Ads, and Advergaming. The Static Ad segment acquired the highest revenue share in the In-Game Advertising market in 2021. Advertisements that do not alter are known as static ads. Some promoters employ static advertisements to boost brand recognition and reach a big audience. It's easy to confuse a static ad with a dynamic ad when it contains a banner or adverts in video games.

Based on the Region, the In-Game Advertising market is analyzed in North America, Europe, Asia-Pacific, and LAMEA. North America emerged as the leading region in the In-Game Advertising market with largest revenue share in 2021. This is due to the high sales of smartphones, PCs, laptops, and other electronic devices, the North American area is likely to grow. As developers increasingly use games as a medium of advertisement, the number of high-quality new games for tablets smartphones, and consoles are expanding.