The Global Video Game Market size is expected to reach $413 billion by 2028, rising at a market growth of 11.8% CAGR during the forecast period.

A video game, often known as a computer game, is an electronic game that generates visual feedback through the use of a user interface or input devices, such as a joystick, keyboard, controller, or motion-sensing device. This feedback is displayed on a visual display device such as a TV, monitor, touchscreen, or virtual reality headset. Audio feedback is given through speakers or headphones, as well as other sorts of feedback, such as haptic technologies, are frequently used in video games. Not all computer games are video games; for example, text adventure games, computer chess, and other games may not usually require a visual display.

The market demand may be fueled by game development that focuses on interactive experiences. For decades, video games have entertained both youngsters and adults. Since the early days of videogames and the first Nintendo and Atari consoles, they've gone a long way. Blurry visuals and limited acoustics have become a thing of the past, with video games becoming more realistic than ever before. As technology progresses, video games improve.

The expense of developing a game for one of the gaming platforms has risen in tandem with the increasing complexity of video game development. In terms of manufacturing and sales costs, this has pushed development process into Hollywood movie territory. The video game industry is enormous. It is bigger than the film and music businesses combined, and it's just becoming bigger.

Virtual reality is now a reality. Meta's Oculus VR division is working hard to improve the performance of the virtual reality headsets it has already delivered. In 2014, Meta paid $2 billion for Oculus VR. The Oculus Quest 2 is the current version of Meta's product. Video games have already exceeded several other types of entertainment in terms of immersion, and virtual reality would add still another layer. When consoles add peripherals to take in such inputs, there would be more experimentation with controls, such as integrating speech, touchscreens, and gestures to game dynamics. 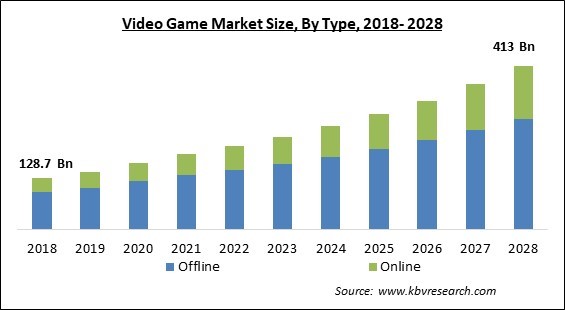 While the world economy was hit hard by the COVID-19 pandemic, the video game industry continued to flourish at a spectacular rate. People were forced to stay indoors and engage in various indoor activities, such as playing video games, as a result of the lockdowns and restrictions on people's movement imposed by various governments around the world as part of their efforts to stop the spread of coronavirus. This increased the number of customers and the number of hours spent playing online games. Several gaming businesses have also made their online games available for free download.

Several manufacturers of consoles and other gaming devices have benefitted from the increased usage of the internet, which has caused the gaming industry to change dramatically, increasing their profit margins in the process. In addition to the increased use of the Internet and social media platforms, online gaming has grown in popularity. As the Internet becomes more accessible and free, the demand for online gaming has increased. An important market force is the continuous growth in the number of Internet customers, as well as the growing number of social network accounts. As more people use the Internet, so does the demand for online entertainment.

Government and property developer initiatives to establish smart cities can dramatically increase market demand. The use of energy-efficient lighting and further development in countries can bode well for the market. The desire for video game solutions may be encouraged by rapid urbanization and the transformation of cities into smart cities. Market demand may be driven by the urgent need for infrastructure improvement and community safety. Furthermore, in the coming years, the adoption of the internet of things (IoT), 5G, and analytics might open up a slew of new options. This is really what cloud gaming is all about - isolating the technical capabilities required to execute a video game from the device on which it is played. By using faraway datacenters, a company can broadcast a game to a user's device using their computing power.

High costs and heating & lagging problems of the gaming Equipment

Potential clients may be put off by the use of pricey technology, lighting effects, and control systems. One of the most serious problems with computers is overheating. Since gaming laptops have higher performance and more usage, the issue causes more problems than normal laptops. Most of the Laptops do not incur overheating, but computers do. The construction of computers can leave spaces to maintain the ideal temperature. Every space is unused space here. As a result of the compactness, air does not pass through the components, which causes them to become heated and approach thermal throttling. 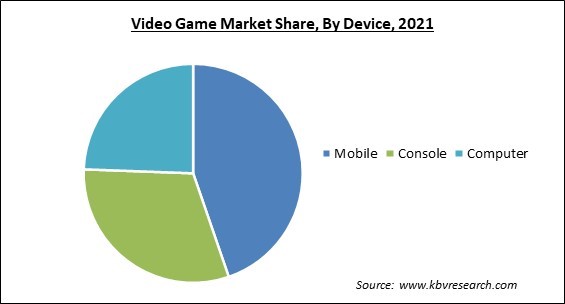 Based on Type, the market is segmented into Offline and Online. The online segment registered a substantial revenue share in the video game market in 2021. Due to the growing number of gamers who view online video games as a preferred form of entertainment is also predicted to contribute significantly to the online segment's growth. Smartphone penetration is expanding, and cloud gaming is becoming more popular, creating new potential for the online segment to flourish. As a result, market players are focusing their efforts on manufacturing novel video game consoles to take advantage of the prospects given by internet gaming.

Based on Device, the market is segmented into Mobile, Console, and Computer. The mobile segment acquired the largest revenue share in the video game market in 2021. Due to the increasing smartphone adoption rate around the world is responsible for the mobile segment's rise. The growing popularity of mobile tablets with larger displays, which provide a better gaming experience, can also be credited to the expansion of the mobile category.

Based on Regions, the market is segmented into North America, Europe, Asia Pacific, and Latin America, Middle East & Africa. The Asia pacific segment procured the largest revenue share in the video game market in 2021. Due to the China's rise as a major gaming hub, the regional market was able to dominate the market. The unrelenting rise in smartphone usage in China is propelling the regional market forward. Tencent Holdings Limited of China has risen to become the largest participant in the video game business, due to aggressive inorganic development methods such as the purchase of Riot Games and Supercell Oy. The expanding rise of online gaming competitions and the increasing growth of digital gamers in the Asia Pacific are leading market players to build systems that could allow gamers to access AAA titles.