The Global Game Engines Market size is expected to reach $5.9 billion by 2028, rising at a market growth of 14.6% CAGR during the forecast period.

A game engine is a type of software platform used for creating video games and generally comes with support programs and essential libraries. The term “engine” is comparable to the word “software system,” which is widely used in the software industry. The development software can also be referred to as the game engine, which uses this platform, and provides several features and tools for developing games. 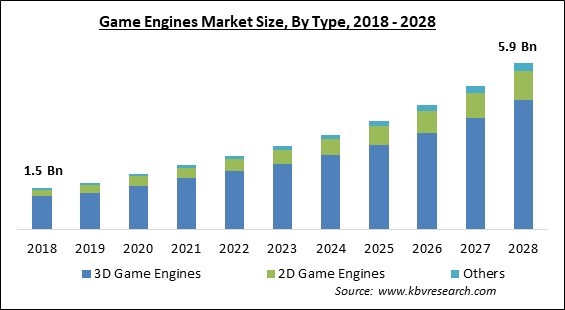 During the game development process, game engine developers usually save costs by recycling/adapting significant portions of the same game engine to create other games or to help them in game porting to numerous platforms. Game engines give reusable software components in addition to visual development tools.

These solutions are provided in an integrated development setting for the rapid and simplified creation of the games in a data-driven way. Game engine developers usually attempt to identify the needs of the implementer by creating strong software suites, which are made up of various components that a game developer may require to create a game.

The increased media consumption due to the COVID-19 pandemic has provided significant revenues for the video gaming and e-sports industry. Furthermore, to escape the frustration and isolation due to the lockdowns, millions of people adopted casual and social gaming trends, which has helped expand the gaming industry. As other economic sectors were heavily affected due to COVID-19, the gaming industry remained immune to it. The game development and releases were unaffected as numerous video gaming developers, publishers, and operators could sustain their operations remotely.

Playing video games on various platforms like smartphones, consoles, and computers are termed gaming. Online gaming has become more famous and practical to players due to the increasing internet speed in recent years, especially in developing nations. Recently, video games have increased both as an industry and a hobby. The size of the video game industry can be assessed from the fact that the music and movie industries combined can’t surpass the gaming industry in terms of revenue.

Development and rise in e-sports players

The growth in the e-sports industry has been significant in recent years, both in terms of profits and spectators. The revenue of the market is directly dependent on the viewership. With the increasing audience for e-games, many major companies are starting to invest in significant numbers in the e-games to publicize their brands which have significantly contributed to the revenue for the industry. Although some events saw rescheduling during the lockdowns, everything is getting back on track in recent times.

The developing process can be quite hard

A video game is created through a process known as video game development. The developer responsible for creating the game is called the developer, who can range from a single individual to an entire international team across various nations. The publisher generally capitalizes on traditional commercial console and PC game development. The outcome of a single game can take years to complete, whereas indie games usually take less time and funding to complete and can be developed by small developers and individuals.

On the basis of Type, the Game Engines Market is divided into 3D Game Engines, 2D Game Engines, and Others. The 3D segment procured the largest revenue share in the game engines market in 2021. Due to their use in the display of three-dimensional geometrical data from the engine, which is also majorly used for the calculations and rendering of 2D images. 3D machines are more complex when compared to their 2D counterparts because they have to render 3D models and add 2D textures. 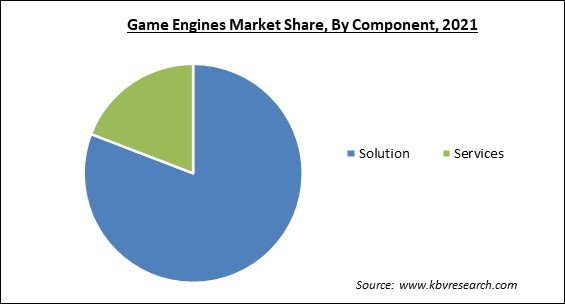 Based on the Components, the Game Engines Market is segmented into Solution and Services. The services segment witnessed a significant revenue share in the game engines market in 2021. Because a famous game engine’s structure comes with built-in robust features and tools with low or sometimes no subscription fees, many developers prefer them. On the other side, developers of game engines offer their engines as services to attract more users on a royalty or subscription basis. Moreover, game engine services are increasing due to the rising popularity of game streaming and cloud gaming services.

By the Platform, the Game Engines Market is classified into Computer, Mobile, Console and Others. The mobile segment garnered the highest revenue share in the game engines market in 2021. Due to the availability of mobile devices and the increasing number of users in rural areas, there is a rise in the number of users on the platform. In addition, on the mobile platform, the trend for free-to-play games is increasing due to the ease of downloading and availability of affordable internet. This trend is driving the demand for game engines as they can be used to add advertisement support by developers to generate revenue.

Region-wise, the Game Engine Market is analysed across North America, Europe, Asia Pacific, and LAMEA. The Asia Pacific region procured the largest revenue share in the game engines market in 2021. Due to the emergence of Asia Pacific as a robust market for cloud-based and mobile gaming. It is also due to the rising mobile gaming witnessed across India, China, and Japan. Providers for Game engine services can see a growth in the consumer demand for cost effective options and innovations.

The global Game Engines Market size is expected to reach $5.9 billion by 2028.

Increasing admiration of games are driving the market in coming years, however, The developing process can be quite hard restraints the growth of the market.

The Solution market is leading the Global Game Engines Market by Component in 2021; thereby, achieving a market value of $4.7 billion by 2028.

The Asia Pacific market dominated the Global Game Engines Market by Region in 2021; thereby, achieving a market value of $2.4 billion by 2028.