The Global Cloud Gaming Market size is expected to reach $14.01 billion by 2027, rising at a market growth of 64.1% CAGR during the forecast period.

Cloud gaming refers to a form of gaming that is based on cloud technology. It is designed in a way that allows the users to operate and play a variety of games on remote servers that streams the whole game on the device with which the cloud is connected to. Cloud gaming technology, unlike conventional gaming procedures that runs on the local disk spaces of the gaming device, works as an integration into the cloud technology with lesser requirement of user’s device storage. In other words, Cloud gaming is also called gaming-as-a-service.

For using cloud gaming technology, the user needs a cloud gaming platform which is provided by the developer organization of the game with a subscription pack. These platforms run in a similar fashion like remote desktops and video-on-demand services. 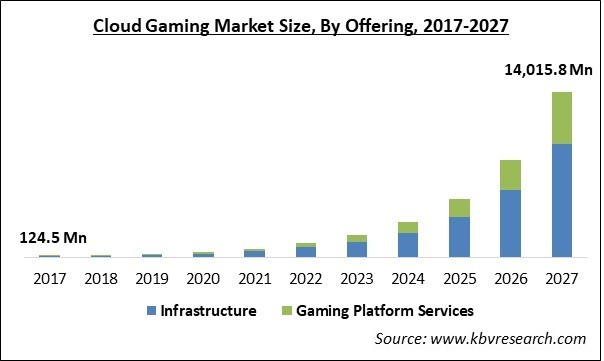 A lot of games across the gaming industry demand high-end PCs with ultra-advanced specifications and external sources like graphic cards and additional RAM, which deprives the gamers, without access to these resources, from the gaming experiences. Cloud gaming allows the users to play a wide range of games on a variety of compatible devices without any restrictions of high-end specifications as well as other external resources.

Due to the advent of cloud gaming services in the gaming industry, gamers are now enabled to play games with intensive graphics smoothly on their low-end devices with lesser specifications. The operation of cloud games runs on the capabilities of network connections. The high-scale infrastructure developed intending to smoothen the cloud gaming experience, allows the user to run graphic-intense games on their low-spec devices like mobile phones, laptops, tablets, gaming consoles, and other devices.

Based on Offering, the market is segmented into Infrastructure and Gaming Platform Services. The advent of the cloud gaming platforms offers a range of lucrative opportunities to the key market players to improvise and invest in the prevailing games and expand their library by providing more content to their users.

Based on Device Type, the market is segmented into Smartphones, PCs & Laptops, Gaming Consoles, Tablets, Smart TVs and HMDs. HMD segment is anticipated to observe the fastest CAGR in the cloud gaming market. There is a large amount of investments dedicated to the development and enhancements in HMDs. Head mounted devices are designed to be worn on the head and sync with eyes while connecting it with a gaming controller to play cloud games.

Based on Solution, the market is segmented into Video Streaming and File Streaming. The file streaming aspect of the cloud gaming market allows the user to download a small portion of the overall game content into their gaming systems in form of bits while the rest of the content keeps downloading in the background while the game is being played.

Based on Regions, the market is segmented into North America, Europe, Asia Pacific, and Latin America, Middle East & Africa. In 2020, the North America emerged as the leading region of the market and would showcase a similar trend even during the forecasting period. The region is home to many developed countries and a hub for rapidly enhancing efficient & advanced technologies. The rapid developments and advancements in the technologies across the region are a key reason for the increased adoption of cloud gaming methods. Thus, these factors would accelerate the growth of the market during the forecasting period.

The major strategies followed by the market participants are Partnerships. Based on the Analysis presented in the Cardinal matrix; Microsoft Corporation is the major forerunner in the Cloud Gaming Market. Companies such as Amazon.com, Inc., Intel Corporation, Tencent Holdings Ltd. are some of the key innovators in the Market.

The cloud gaming market size is projected to reach USD 14.01 billion by 2027.

Increasing trend of gaming communities are driving the market in coming years, however, Addiction to cloud games due to increased access limited the growth of the market.

The Smartphones market dominated the Global Cloud Gaming Market by Device Type 2020, thereby, growing at a CAGR of 61.9% during the forecast period. This is credited to the easy access of smartphones and tablets.

The North America market dominated the Global Cloud Gaming Market by Region 2020, and would continue to be a dominant market till 2027; thereby, achieving a market value of $5,478.8 million by 2027.