The Global Augmented Reality Market size is expected to reach $89 billion by 2026, rising at a market growth of 46.3% CAGR during the forecast period. With the help of augmented reality, a virtual image can be superimposed on a real-world view of the user. Digital information is included into the physical environment whose components are increased with inputs like sound, video, or graphics. The factor boosting the growth of the augmented reality market is the rising penetration of advanced technologies across industries like retail, consumer electronics, and automotive. Also, the growth of the market is boosted by the growing adoption of mobile devices around the world, because it seems to be the most suitable form of augmented reality.

The major factor that boosts the augmented reality market growth is the rising adoption of AR-integrated smart glasses. The demand for smart glasses is rising due to their ability to combine the vision of the user with the virtual world seamlessly. Such glasses utilize a blend of sensors, smart software, display, accelerometers, and internet connectivity to add relevant information to the wearer's views. For several domestic and professional uses, AR-integrated smart glasses are rapidly being utilized. Several innovative products are being introduced by the different market vendors such as Microsoft HoloLens and Google Glass Enterprise Edition 2. The growing adoption and constant introduction of such innovative products will boost the development of the augmented reality market during the forecast years.

Due to the outbreak of the COVID-19 pandemic around the world, various industries have been impacted in both a positive and negative manner. As the world fights with the global pandemic, the global economy has significantly hampered. However, the augmented reality market has been positively impacted by COVID-19. AR solutions are anticipated to contribute significantly to the healthcare sector in order to contain the spread of COVID-19. 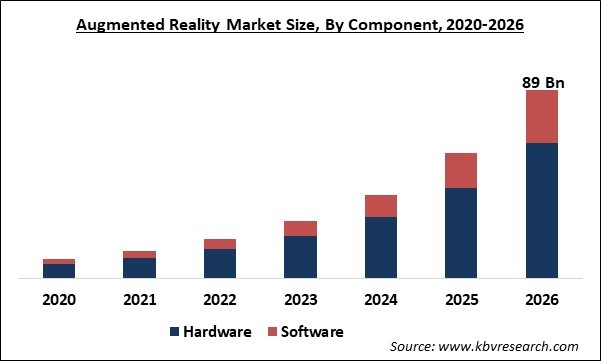 Based on Component, the market is segmented into Hardware and Software. Hardware devices held a significant revenue share of the augmented reality market. This is credited to their higher adoption in commercial and enterprise applications. These devices include a pair of smart goggles with accessories like camera trackers, monitors, headphones, and storage.

Based on Device, the market is segmented into Head Mounted Display, Head up Display, Hand Held Devices, Smart Glass and Others. The Head-Mounted Displays (HMD) and Head-up Displays (HUD) markets are estimated to develop at a fast pace in the forthcoming years. This is credited to the rising demand in different industries that include military & defense, research, aerospace, gaming, and healthcare.

Based on End User, the market is segmented into Consumer, Enterprise, Commercial, Healthcare, Automotive, Aerospace & Defense and Others. Deployment of technology in the gaming industry will permit users to examine the physical environment and offer an improved experience by incorporating visual & audio content. With the help of this technology, a user is offered an interactive experience of a real-world environment on tablets, smartphones, and portable gaming systems. The rising safety demand and enhancing the Situational Awareness (SA) among pilots will boost device adoption in the aviation industry.

Based on Regions, the market is segmented into North America, Europe, Asia Pacific, and Latin America, Middle East & Africa. The U.S. and Canada are expected to dominate the market share of North America. This is owing to the technological developments and the rising popularity of augmented reality enabled devices in the region. The region permits quicker implementation of advanced technologies because it has a well-built infrastructure.

The major strategies followed by the market participants are Partnerships. Based on the Analysis presented in the Cardinal matrix; Google, Inc., Alibaba Group Holdings Limited, Samsung Electronics Co., Ltd., Apple, Inc., and Microsoft Corporation are the forerunners in the Augmented Reality Market. Companies such as PTC, Inc., Qualcomm, Inc., Vuzix Corporation, Lenovo Group Limited, and Sony Corporation are some of the key innovators in the market.

The global augmented reality market size is expected to reach $89 billion by 2026.

There are several reason that cause high demand of this market one of them is the rising adoption of smartphones and tablets.