The Global Nanosatellite And Microsatellite Market size is expected to reach $8 billion by 2028, rising at a market growth of 22.3% CAGR during the forecast period.

Nanosatellite and microsatellite are small satellites, which are also known as miniature satellite or smallsat, has a low mass, and is typically under 1,200 kg in size (2,600 lb.). Small satellites can be developed to cut down on the heavy price of launch systems and construction expenses. For some applications, such as the radio relay and collection of scientific data, miniature satellites, particularly in huge numbers, are considered more helpful than fewer, larger ones. 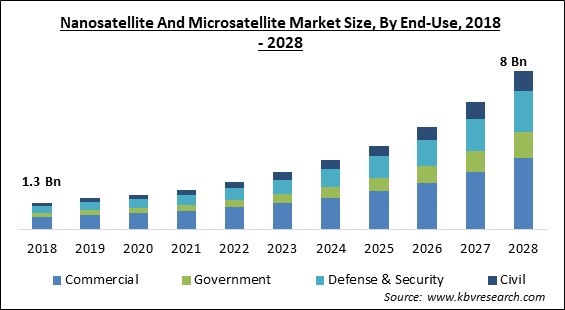 The shorter development durations for smaller operations can cut overall costs, so providing pleasant budgetary options for space programs with severely constrained funds. In general, satellite systems are shifting from a single satellite approach towards the cooperative sensing strategy. For missions needing continuous or global coverage within a relatively brief period of time or in real-time, deploying a cluster of satellites has proven to be advantageous.

COVID-19 along with unrestricted price declines, and bankruptcy disturbed the satellite business to its core. Big, moderate, and small players all had to discover strategies to survive in the near term while planning for the new standard in the medium to long term. As the industry took steps to manage the impact of these three, stakeholders in the supply chain were searching for the appropriate market indicators. With time major companies targeted key verticals and recalibrated their value propositions for a rebound. Nevertheless, despite the detrimental impact of COVID-19, the increasing engagement of private actors, and the rise in mission capacity, the nanosatellite and microsatellite market is experiencing an increase in small satellite development and launch activity.

Monitoring agricultural fields, spotting climate changes, disaster preparedness, meteorology, and other areas are all covered by earth observation services. With the ability to use images for a variety of tasks, including precision management of water, land, and forest resources, the need for Earth imaging with high-resolution has expanded across verticals. Space-based insights can be very helpful for catastrophe management both before and after the occurrence.

Government laws that are too strict impede growth.

The development of the small satellite habitat and industry is influenced directly or indirectly by national and international policies. There isn't currently a thorough domestic or global on-orbit regulation framework. There are rules governing the spectrum and remote sensing satellite launches and re-entry like Space Situational Awareness (SSA), rendezvous & proximity operations, or RF mapping but there are none governing on-orbit operations. 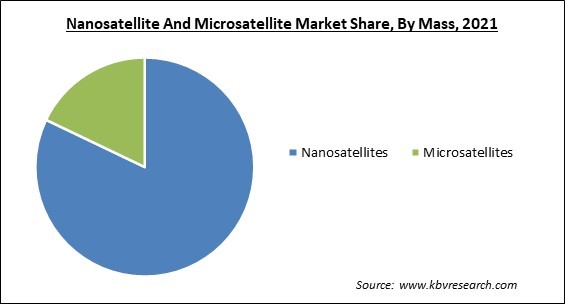 Based on end use, the nanosatellite and microsatellite market is categorized into government, defense & security, commercial, and civil. The commercial segment procured the maximum revenue share in the nanosatellite and microsatellite market in 2021. This is due to a surge in broadcasting, communication, and navigation operations. Small satellites have become a potential investment for private firms owing to their speedier production and potential to be deployed for commercial usage.

On the basis of region, the nanosatellite and microsatellite market is analyzed across North America, Europe, Asia Pacific, and LAMEA. The North America segment acquired the highest revenue share in the nanosatellite and microsatellite market in 2021. The expansion is attributable to increased spending on space-related activities. NASA, for instance, assigns a specified expenditure for space-related activities such as space technology, science, aeronautics, exploration, as well as other space operations each year.