The Global Esports Market size is expected to reach $3,574.9 million by 2027, rising at a market growth of 21.3% CAGR during the forecast period.

Esports refers to electronic sports, in which digital mediums are used among competitors and spectators like PC, tablets, or mobile. Esports is available in the form of video games, which are played in leisure time as well as professionally by any traditional sportsperson. There is the growing popularity of esports due to the increasing digitalization across the world and the reduced cost of advanced gaming technologies.

Moreover, Esports has shifted online video gaming towards a spectator sport. In esports events, spectators experience watching a professional gaming event just like any other traditional sports event; however, instead of watching a physical competition, the audience watches video gamers competing with each other through the digital medium.

There is a huge base of participants prevailing in the video game industry, which is more than the combined viewers & participants of the music & entertainment sectors, and this base is constantly growing across the globe. The high popularity of video games like PUBG, Counter-Strike, Call of Duty, and others is estimated to augment the revenue share of the esports market. 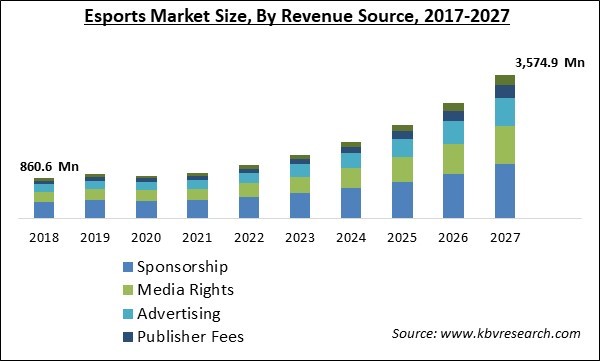 The outbreak of the COVID-19 pandemic has positively impacted the growth of the esports market. The imposition of lockdown and social distancing norms has compelled people to engage with one another through digital as well as virtual platforms and mediums. In addition, digital transformation in the online gaming sector has contributed to the emergence of Esports. However, the deployment of esports was affected by the restricted supply of auxiliary tools like gaming setup, joypad, and console sensors & screens. However, with the relaxations in the lockdown norms and regulations, the growth of the esports market would surge in the coming years.

During the lockdown, people were compelled to follow the stay-at-home orders and could not move outside to play sports on grounds, which has shifted their focus on esports events and thus, augmented the demand for online video games. Several end-users have created online tournaments of famous or popular games, which has fueled the demand for these games in the market.

The constant technological advancements across the world have compelled people to depend on smartphones, several high-tech gadgets, and the internet. As a large number of people are engaged in playing video games, the vendors have introduced a recurring revenue model in the past few years. In addition, virtual reality products, video game tournaments, and consumer spending on video content are experiencing high growth around the world due to the consistent technological advancement.

The growing number of esports events with huge prize pools

The Esports industry is getting monetized due to the high popularity of these esports events among gamers and spectators. Several universities and colleges are also offering scholarships and even esport courses just like any other traditional sports, which are creating opportunities for the gamers to choose it as a professional career. This would accelerate the growth of the esports market across the globe in the coming years.

Absence of standardization in the esports market

As the esports industry is still an emerging market, there are several challenges faced by companies as well as gamers. There are many participants and gamers who face difficulties in checking out the authenticity of tournaments. Along with the increasing number of tournaments, the number of scams and fraudulent is also rising, which is creating problems for the authentic and real esports tournament organizers. The absence of standardization of the esports industry also indicates the consistent issues that are faced by the players, tournaments, teams, and their advertising, sponsorships, or contracts.

The esports market is divided into media rights, sponsorship, game publisher fee, digital advertisement, and tickets & merchandise. The sponsorship segment is expected to exhibit a promising growth rate during the forecasting period.

The esports market is analyzed across North America, Europe, Asia Pacific, and LAMEA. The Asia Pacific emerged as the leading region of the esports market in 2020. It is due to the high usage of esport service across this region and the huge population of the region which consist of a large pool of mobile subscribers for esport companies. In addition, as the region is the biggest contributor of internet subscribers, the popularity and adoption of esports are high in this region.

The major strategies followed by the market participants are Product Launches. Based on the Analysis presented in the Cardinal matrix; Intel Corporation and Tencent Holding Limited are the forerunners in the Esports Market. Companies such as Nintendo Co., Ltd., NVIDIA Corporation, and Activision Blizzard, Inc. are some of the key innovators in the Market.

Rise in popularity of video games due to the influence of technology are driving the market in coming years, however, absence of standardization in the esports market limited the growth of the market.

Esports market estimated to grow at a CAGR of 21.3%.