The Global Virtual Reality Market size is expected to reach $31.2 billion by 2026, rising at a market growth of 20.3% CAGR during the forecast period. Virtual Reality (VR) is bringing a paradigm shift in the manner we interact with the environment and objects around us. Growing adoption and utilization of virtual reality in different sectors is boosting the global demand of the virtual reality market.

A person can explore a 3D computer generated environment which is presented by virtual. With the help of this, a person feels himself to be part of the near-reality world. Virtual reality has been rising to prominence across different sectors such as real estate, healthcare, entertainment, and education, etc. Moreover, VR is consistently being used to give training to employees and doctors to prevent any errors. With the help of VR technology, conference and meetings in real-time are becoming possible. Virtual reality makes it more convenient for engineers to assess designs and check how the structure will appear in real.

The adoption of VR is boosted by the rising affordability of 360-degree cameras because these cameras are becoming independent accessories in smartphones. These cameras, integrated in smartphones and mobile apps, are well-versed in capturing 360-degree videos. As a result, network sites such as Facebook and YouTube are adopting and promoting such videos. Manufacturers of smartphones are planning to develop operating systems incorporated with pre-installed camera apps with 360-degree photo capacities. The growth of the VR market is boosted by the rising popularity of 360-degree picture content.

Based on Technology, the market is segmented into Semi & Fully Immersive and Non-immersive. The fully immersive segment holds a major market share. This segment is anticipated to increase further and display a major CAGR during the forecast years. Numerous companies are researching haptic gloves and other wearables. In 2018, Microsoft Corporation introduced Microsoft Layout which is a mobile application for VR headsets. This application allows users to virtually move 3D objects on a floor plan, making it convenient for architects to observe their designs.

Based on Component, the market is segmented into Hardware and Software. The hardware segment held the significant revenue market of the global virtual reality market in 2019. Demand for HMDs combined with the reducing prices of the display will boost the growth of the segment in the next few years. Consumer-ready headsets to experience VR can accelerate the segment growth during the forecast years. 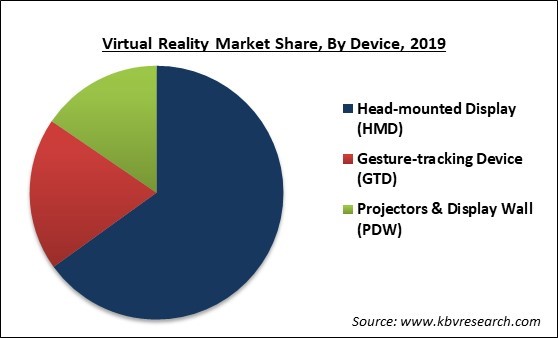 Based on Device, the market is segmented into Head-mounted Display (HMD), Gesture-tracking Device (GTD) and Projectors & Display Wall (PDW). The HMD segment held a significant revenue share of the global market in 2019. The segment is anticipated to keep up its dominance over the forecast years. The gesture tracking devices segment is expected to gain popularity because of its application in the design, defense, and architecture sectors.

Based on End User, the market is segmented into Consumer, Commercial, Healthcare, Enterprise, Aerospace & Defense and Others. The virtual reality market will be dominated by consumer applications in the next few years. Consumer sectors include gaming and entertainment applications, accounted for the highest revenue share of the market. This is credited to the high penetration of this sector in the gaming industry. The immersive technology accompanied with VR in gaming and entertainment lets a user experience a completely new virtual world. The virtual reality market will be led by consumer applications during the forecast years.

Based on Regions, the market is segmented into North America, Europe, Asia Pacific, and Latin America, Middle East & Africa. In 2019, the market was dominated by North America. This is owing to the high adoption of new technologies by the common people and the presence of numerous virtual reality companies. The U.S. is a leading contributor to the development of the virtual reality market in North America. However, Asia-Pacific is anticipated to witness the biggest development rate during the forecast years. This is credited to the increase in adoption of technologically advanced solutions, a rise in penetration of smartphones in developing countries such as India and China, and increase in application areas among end-use industries.

The major strategies followed by the market participants are Product Launches and Partnerships. Based on the Analysis presented in the Cardinal matrix; Microsoft Corporation, Google, Inc., Facebook, Inc., and Samsung Electronics Co., Ltd. are the forerunners in the Virtual Reality Market. Companies such as Eon Reality, Inc., Dassault Systemes SE, Ultraleap Limited, Sony Corporation, and Autodesk, Inc. are some of the key innovators in the market.

The global virtual reality market size is expected to reach $31.2 billion by 2026.

There are several reason that cause high demand of this market one of them is penetration of HMDs in the gaming and entertainment industry post COVID-19.