The Global Wearable AI Market size is expected to reach $38.3 billion by 2025, rising at a market growth of 20.2% CAGR during the forecast period. Wearable AI market has been witnessing exponential growth due to a growing proliferation of emerging technologies, including AI and 5G smartphone penetration. Smartphones are commonly used for storing and analyzing data obtained from wearable devices. The rapid growth of the smartphone industry has increased the production of android & IoT-enabled responsive and user-friendly applications for wearable devices. Other factors that drive market growth include rapid urbanization and increasing disposable incomes in developing economies, which determine future trends in wearable technology.

There has been widespread adoption of smart watches by companies such as Huawei (China), Apple (US), and Samsung (South Korea) due to the ease of access to the AI features provided by them. In addition, the launch of Android 2.0 OS on Android-based smart watches leads to on-board voice support via internet connectivity. Smart watches have had a strong customer preference as a result of the simplicity of wear and the easy use of a broad variety of features on a single touch.

The emergence of different smart and advanced wearables for different purposes boosts the wearable AI industry trends. For example, the new Apple Airpods Pro provides active noise cancellation for immersive sound, transparency mode to hear what's going on, connect to the iPhone or Apple watch, and uses the Siri Virtual Assistant and others that have a range of other smart apps. Also, new models, such as ODGR-9 at the Osterhout Group driven by Qualcomm's Snapdragon 835 SoC, coupled with 6GB of RAM, are smart eyewear with several features that increase competition in the wearable AI market. 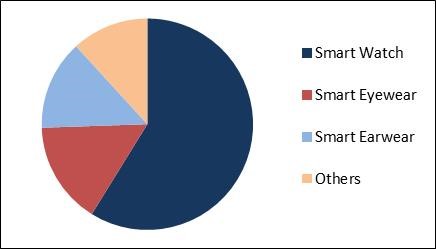 Factors such as growth in the adoption of AI assistants, expanded penetration of AI in the healthcare sector, and development of IoT and convergence of wireless technology boost the growth of this market. However, the short life of smart wearables is hindering wearable AI market development. In addition, AI assistance for animal health monitoring and advancement in personal computing is anticipated to create lucrative business prospects for wearable AI.

The global wearable AI market size is expected to reach $38.3 billion by 2025.

The market is expected to witness a boost due to Growing application in consumer electronics, Rising demand for AI-enabled voice assistance feature in wearable devices, and Augmentation of Operations in Healthcare Industry. The market growth is expected to get affected due to COVID-19 impact on supply chains.

The demand for smartwatches & fitness bands is projected to expand at the highest growth rate over the forecast period.