The Global Solid state Radar Market size is expected to reach $2.2 billion by 2027, rising at a market growth of 4.0% CAGR during the forecast period.

Solid-State Radar is a cutting-edge technique that integrates advanced electronics with crucial components to build sophisticated devices that can identify threats instantly. In addition, Solid-state radar is a valuable tool for meteorologists since it can detect precipitation in a wide range of meteorological situations. To accomplish this, the device employs a method known as frequency modulation.

In the initial phase, Radar was developed for military and defense objectives. Modern radar systems, on the other hand, are principally used for air traffic control, radar astronomy, weather formation, and meteorological monitoring, due to the emerging technology and innovation. Additionally, they are also used in air defense systems, anti-missile systems, and anti-collision systems for airplanes. 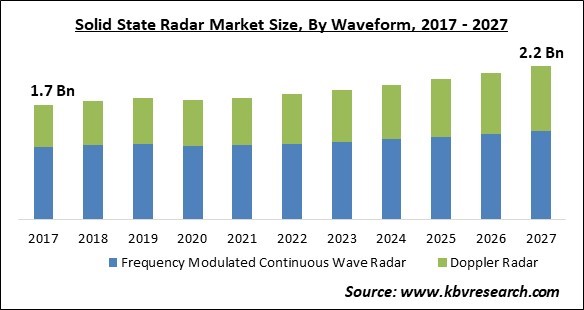 The COVID-19 pandemic has had a tremendous impact on the electronics and semiconductor industries. Due to an increase in the number of COVID-19 cases, business and manufacturing facilities in several countries have been closed, and they are projected to remain closed in 2021. Furthermore, the partial or total lockdown has affected the worldwide supply chain, making it difficult for manufacturers to reach their customers.

The COVID-19 pandemic is wreaking havoc on society and the global economy. The impact of this pandemic is increasing day by day, and it is disrupting worldwide business. The crisis is causing stock market uncertainty, which is leading to a drop in corporate confidence, a major slowdown in supply chains, and an increase in panic among the consumers.

The Solid-State radar industry makes substantial use of cutting-edge technologies such as software-defined radars and digital components. Digital Signal Processors (DSP), fast Commercial Off-the-Shelf (COTS) microprocessors, Ultrafast Analog-to-Digital (A-D) and Digital-to-Analog (D-A) converters, and high-speed digital networking have enabled new generation radars to provide high output to power ratios while maintaining a small form factor. The development of active electronically-scanned arrays has paved the way for the development of 3D radars. A new generation of Advanced Electronically Scanned Array (AESA) radars has emerged as a result of the development of Solid-State electronics such as Gallium Nitride (GaN) and Gallium Arsenide.

UAVs (Unmanned Aerial Vehicles) are mostly utilised in the military. They can also be utilised as remote sensing equipment in the civilian sector. Many countries around the world are developing and deploying unmanned aerial vehicles (UAVs) for intelligence collection, surveillance, and reconnaissance tasks. UAVs of the next generation are being employed for a variety of combat operations, including ground attacks against hostile targets. For airborne mapping, these UAVs use a variety of synthetic aperture radars. There has been a rise in deployment of lightweight combat UAVs which are integrated with solid-state radars.

The deliberate production of radio frequency signals that interfere with the operation of a radar is known as radar jamming. Jamming can be accomplished using two major techniques: noise and repeater. Depending on their range, size, and nature, solid-state radars are vulnerable to a jamming approach. Interfering signals are used in new electronic radar jamming techniques to block the receiver with highly concentrated energy signals, effectively blocking the signal from reaching the airborne radar and preventing it from functioning properly. 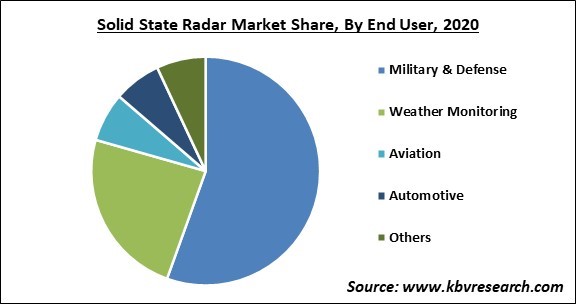 Based on Waveform, the market is segmented into Frequency Modulated Continuous Wave Radar and Doppler radar. Doppler Radar acquired the significant revenue share of the Solid State Radar Market in 2020. The growth of the segment is due to the use of doppler radar in speed cameras, radar cannons, combat, and weather forecasting. In addition, it can also be used to measure the speed of rain clouds, the rotation of rain clouds, and the severity of rainfall in weather forecasting. Moreover, the pulse-doppler technique is used by most current weather radars to investigate precipitation motion.

Based on End User, The market is segmented into Military & Defense, Weather Monitoring, Aviation, Automotive, and Others. Weather monitoring segment was the second-largest revenue contributor to the solid-state radar market in 2020. Moreover, the segment would display the similar trend even during the forecasting period. This is because of the high utilization of these radars in understanding the climatic conditions of the atmosphere. In addition, applications of these radars in climatological and meteorological applications have increased the demand for such radars. Further, these radars are used to improve the weather forecasting and better manage the extreme conditions like floods, heat-waves, and droughts.

Based on Frequency Band, the market is segmented into X-Band, S-Band, L-Band and Others. The S-band solid-state radar would display the fastest growth rate during the forecasting period. Solid-state radars in the S-band produce highly precise outputs and are stable at high power. Clear images, less maintenance, and low operating expenses are among the other benefits of these radars. S-Band solid-state radars would gain more popularity due to rising aviation traffic and increased investments in airport infrastructure development in various nations across the world.

Based on Regions, the market is segmented into North America, Europe, Asia Pacific, and Latin America, Middle East & Africa. The Asia-Pacific would showcase the fastest growth rate in the market during the forecast period. This is attributed to the significant investments in the Military & Defense sector by the regional countries.

The solid state radar market size is projected to reach USD 2.2 billion by 2027.

High deployment of unmanned aerial vehicles (UAVs) are driving the market in coming years, however, vulnerable to new jamming methods limited the growth of the market.

The Non-Commercial market dominated the Global Solid State Radar Market by Industry 2020, and would continue to be a dominant market till 2027.

The North America market dominated the Global Solid State Radar Market by Region 2020, and would continue to be a dominant market till 2027.