The Global Radiation Hardened Electronics Market size is expected to reach $1.8 billion by 2028, rising at a market growth of 3.9% CAGR during the forecast period. 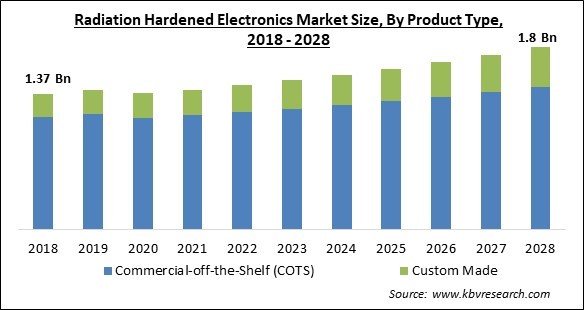 Electronic components such as circuits, resistors, transistors, diodes, capacitors, and many more, single-board computer CPUs, and sensors that are designed and manufactured to be less susceptible to damage from radiation and extreme temperatures (-55°C to 125°C) are known as radiation-hardened electronics or rad-hard electronics.

They essentially perform the same activities as non-hardened equivalent electronics, but they've been designed and tested to withstand various sorts of radiation possible damage in space, during high-altitude flights, at scientific research centers, and in nuclear reactors. Rad-hard electronics are additionally insulated in a layer of depletion boron and installed on insulating substrates rather than typical semiconductor wafers as part of the "hardening" process.

They can withstand significantly more radiation than commonly produced semiconductors because of this. All of these measures are focused on minimizing both logical and physical harm, such as data loss, communications and processing problems, and device failure. Rad-hard electronics are frequently used by space programs, private spaceflight companies, the defense community, and research scientists to ensure reliable and consistent performance and longer service life in cruel radioactive and similarly dangerous environments due to extremely low system failures across several years in cruel radioactive and similarly dangerous environment.

COVID-19 has had a considerable impact on the value chain and the desire for radiation-hardened electronics in a variety of applications. COVID-19 has a considerable impact on satellite manufacturing through the use of radiation-hardened electronic components. Low production quantities and a high level of expertise characterize this sector, which has a small number of suppliers. COVID-19 has also caused supply chain disruptions, longer lead times in raw resources and components supplies, delays in contract executions, and lockdowns in several nations, particularly in Europe, where the third phase of lockdown was implemented in the first quarter of 2021. Some of the industry's manufacturing activities are also delegated to back-end subcontractors and external silicon foundries.

The demand for small satellites is increasing as the demand for affordable satellite communication for diverse purposes including agriculture monitoring, television programming content and mobile phone connection, and military surveillance and monitoring grows. Commercial satellites are frequently launched in geosynchronous orbits for maximum coverage and with a lifespan of 15–20-year. The requirement for radiation-hardened electronics systems has increased as the number of communication satellites in earth's orbit has grown. OneWeb, SpaceX, Amazon, and Telesat are among the New Space entrepreneurs intending to launch a giant constellation of thousands of low-earth-orbit satellites in the coming years to improve the connection network.

Increasing the use of space missions in space stations

The demand for better radiation-hardened components, innovative configuration, design methodologies, and software models to enhance the radiation endurance of electronic components is increasing as the number of space missions increases. The United States was the first country to collaborate closely with a number of space organizations and express an interest in pursuing space-related initiatives. Its production and testing capabilities, as well as skilled workers, make it a lot easier for the nation to carry out these tasks. The country is very interested in growing its commercial spacecraft sector and promoting space tourism. NASA and SpaceX launched its Crew-4 mission in April 2022 with an all-citizen crew to conduct microgravity research aboard the space station and expand access to space for more people. 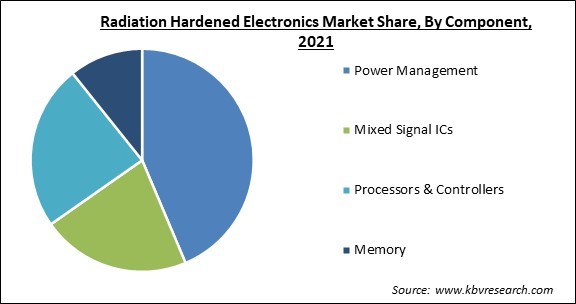 Semiconductor electronic devices and circuits are frequently exposed to hard environments where they may be exposed to ionizing radiation settings, and as a result, the circuits may fail and the overall modules of the system may collapse, necessitating the use of RADHARD circuits. RADHARD circuits are typically found in nuclear reactors, space application circuit modules, and device internal modules where the circuits must operate without interruption due to ionizing radiation effects. RADHARD is a method of designing an electronic circuit such that it will work without fail in ionizing radiation-affected locations. Even if there is any form of ionization effects present. To create these circuits since there is a high demand for them to perform precisely and efficiently in the modules that develop, particularly in Crewed Spacecraft, Army Aircrafts, Satellite, Nuclear Power Plants, and Nuclear Power Weapons, among other things.

Based on Deployment, the market is segmented into On-premise and Cloud. The cloud segment garnered a substantial revenue share in the Radiation Hardened Electronics Market in 2021. The expanding use of learning analytics, lower cost of ownership, and increased acceptance of mobile learning in the EdTech sector can all be related to the larger share. Cloud deployment is appealing to businesses of all sizes because it provides regular data backup, reducing operating costs, less capital, highly secure, and quick deployment characteristics for always-on operation.

Based on Component, the market is segmented into Power Management, Mixed Signal ICs, Processors & Controllers, and Memory. The mixed signal ICs segment recorded a substantial revenue share in the Radiation Hardened Electronic Market in 2021. Due to the demand for more complicated analog and mixed-signal radiation-resistant (RH) integrated circuits is being driven by the rise of the satellite business and new defense/aerospace technology. Many of the digital needs can be met using RH FPGAs and microprocessors, but analog must rely on COTS RH components or design a unique solution (RH analog custom ASIC).

Based on Manufacturing Technique, the market is segmented into Radiation-Hardening by Design (RHBD) and Radiation-Hardening by Process (RHBP). The Radiation-Hardening by Design (RHBD) segment procured the largest revenue share in Radiation Hardened Electronic Market in 2021. Cue to the low cost, simplicity of customization, and capacity to mass-produce radiation-hardened devices are all factors contributing to the segment's rise. RHBD makes use of a variety of principles, including layout solutions and element configuration. This manufacturing approach allows circuit operation to be reconfigured to avoid cells failing during the operation and improves dependability in severe situations.

Based on Product Type, the market is segmented into Commercial-off-the-Shelf (COTS) and Custom Made. The custom made segment registered a significant revenue share in the Radiation Hardened Electronic Market in 2021. It is due to the corporations are embracing a number of advances, which necessitates a massive amount of effort, money, time and R&D. In addition, manufacturers must adapt design techniques based on the end user's specific requirements, resulting in lengthy radiation-hardened component development cycles.

Based on Application, the market is segmented into Space, Aerospace & Defense, Nuclear Power Plant, Medical, and Others. The space segment garnered the largest revenue share in the Radiation Hardened Electronic Market in 2021. Due to the increased ISR operations, as well as a growth in the number of space missions, are pressuring radiation-hardened electronics manufacturers to develop more robust and reliable electrical parts for space applications. As of April 2020, around 2,666 functioning satellites are orbiting around the planet, according to The Union of Concerned Scientists (UCS).

Based on Regions, the market is segmented into North America, Europe, Asia Pacific, and Latin America, Middle East & Africa. The North America segment procured the largest revenue share in the Radiation Hardened Electronic Market in 2021. The leading companies such as Honeywell Aerospace & Defense (US), Microchip Technology (US), and Xilinx, Inc. (US), leading space research institutes such as the U.S. Space Research Institute (FSRI), Keck Institute for Space Studies (US), and National Aeronautics and Space (NASA) have contributed to the industry's growth (KISS). In several countries, the United States provides most radiation-hardened equipment.

The major strategies followed by the market participants are Product Launches. Based on the Analysis presented in the Cardinal matrix; Texas Instruments, Inc. and Honeywell International, Inc. are the forerunners in the Radiation Hardened Electronics Market. Companies such as Renesas Electronics Corporation, STMicroelectronics N.V., Infineon Technologies AG are some of the key innovators in the Market.