The Global Public Transportation Market size is expected to reach $285.7 billion by 2028, rising at a market growth of 5.4% CAGR during the forecast period.

Public transit, Public transport also referred to as public transportation, mass transit, or simply transit is a transportation system for passengers by group travel systems available to the general public, as opposed to private transport, which is typically managed on a schedule, operated along established routes, and charges a posted fee per trip. City buses, trolleybuses, trams (or light rail) and passenger trains, fast transit (metro/subway/underground, etc.), and ferries are examples of public transportation. 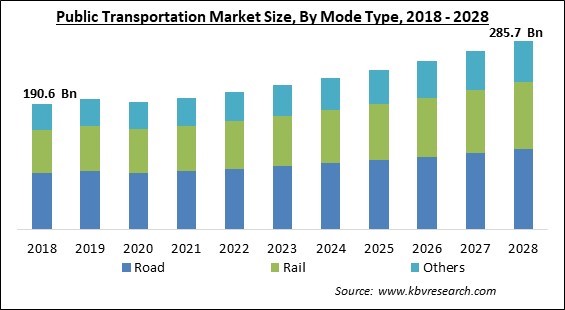 Intercity transportation is dominated by airplanes, motor coaches, and intercity rail. In several regions of the world, high-speed rail networks are being constructed. The majority of public transportation systems operate on fixed routes with predetermined boarding and disembarking sites and according to a predetermined schedule, with the most frequent services adhering to a headway.

However, the majority of public transport journeys involve other modes of transportation, such as people walking or utilizing bus services to reach railway stations. In many regions of the world, share taxis offer on-demand services that may compete with permanent public transport lines or complement them by transporting customers to interchanges. Paratransit is occasionally employed in low-demand regions and for those who require door-to-door service.

During the most severe public health catastrophe caused by the new coronavirus pandemic, governments throughout the world have shut down public transportation systems. In addition, stringent social distance constraints have slowed the expansion of public vehicles. As transmission rates increase in populated areas, public transportation will continue to decline shortly. Moreover, measures by groups such as working from home to prevent the spread of COVID-19 will further constrain the demand for public vehicles. Infrastructural development for public transport vehicles would be halted for a time owing to decreased government spending around the 0 as a result of the pandemic's economic impact.

In recent decades, the flow of people into urban regions and the rise of urban and metropolitan areas have increased dramatically. The growth of the market is attributable to the expansion of infrastructure and the advancement of technology. To address the demand for public transportation in megacities, several governments are building BRT, metro, monorail, and light rail transit systems.

The capacity to outfit buses and other public vehicles with alternative fuel sources is one of the biggest technological advantages of public transportation. Some systems are entirely electric or fueled by renewable energy. Even relative to other gas-powered vehicles, the fuel economy of public transit is superior. Reduced gasoline use improves air quality in cities with integrated public transportation. Approximately 85 percent of transportation-related greenhouse gas emissions are caused by daily commutes.

Based on the Ticket Distribution Channel, the Public Transportation Market is segmented into Online and Offline. The online segment witnessed a significant revenue share in the public transportation market in 2021. The segment's rise may be ascribed to the proliferation of internet services, the declining cost of smartphones, and the growing reliance on digital solutions. Generation z and millennials who are tech-savvy are anticipated to dominate the commuting population in the next years. 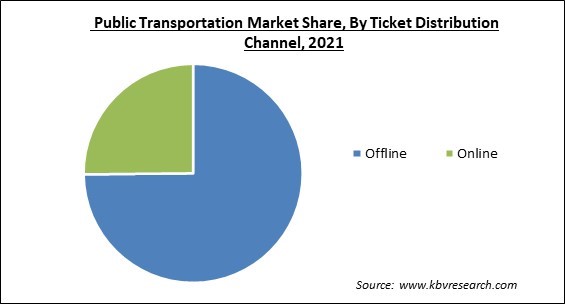 On the basis of Mode Type, the Public Transportation Market is divided into Road, Rail, and Others. The road segment procured the largest revenue share in the public transportation market in 2021. The widespread availability and increased ridership of the road transport system, which consists mostly of buses, trolleybuses, etc., are contributing to the segment's expansion. The implementation of a bus rapid transit system in several megacities throughout the world seeks to provide flexible, dependable, and speedier transit, while simultaneously contributing to the expansion of the road segment.

Region-wise, the Public Transportation Market is analyzed across North America, Europe, Asia Pacific, and LAMEA. The Asia Pacific segment garnered the highest revenue share in the public transportation market in 2021. It is because Japan, China, and South Korea's highly modern and reasonably priced public transportation contribute to the expansion of the regional market. Additionally, the region contains a big population of middle-income individuals who rely on public transit for their daily commute. Additionally, this adds to the expansion of the regional market.