The Global Professional 3D Camera Market size is expected to reach $23.8 billion by 2027, rising at a market growth of 30.5% CAGR during the forecast period.

These cameras can be purchased separately or as part of a larger imaging system. Scene recording for 3D movies or games, industrial activity monitoring, building, arts, and manufacturing are some of the common applications of professional 3D cameras. Moreover, Professional 3D camera-based devices like insta360 pro 2 matterport and others are becoming more sophisticated as 3D scanning algorithms improve. The Matterport Pro 3 was released in 2020, and it has fuelled the demand for such cameras in the market. 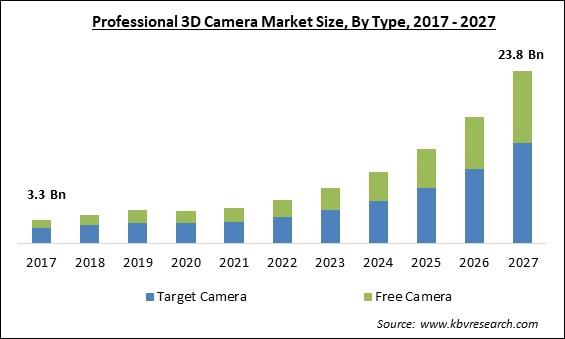 The COVID-19 pandemic has had a negative impact on the professional 3D camera market share, as a large portion of the global workforce now works from home. This has resulted in a drop in tourism, which has lowered the demand for professional 3D cameras. Despite the fact that the COVID-19 pandemic has temporarily halted field activity on some major projects, the market is likely to remain healthy, with the total number of shipments being modestly unaffected during the following three years beginning in 2020. New projects have been postponed around the world, which has impacted demand for 3D cameras in a variety of industries, including manufacturing, industrial, and retail.

The entertainment and media business is transitioning to a high-definition content distribution method. In addition, the rapid development of HD content movies, documentaries, and games supports this transition. Due to the entry of many industry leaders in the creation of 3D movies, 3D displays, and related products, the market's ecosystem is evolving. Moreover, audience preferences are shifting as a result of rising wealth levels, particularly in developing countries. Further, the popularity of 3D movies and games is growing. To produce HD-grade 3D material, high-quality 3D images are required. It has become easier for new players to enter the 3D camera industry due to a significant increase in demand for HD movies, games, and videos.

Emerging radical trends backed by creative technological breakthroughs and powerful advancements, such as HD and touch screen would act as the major market trends. In addition, there has been a growing consumer propensity toward advanced photography in the recent years. Additionally, Professional 3D cameras have evolved over time, resulting in advanced cameras with higher resolution, faster focusing, and support for a variety of peripherals. In addition, there has been a rise in the practice of including a Wi-Fi or 4G modem in these cameras to give them a competitive edge over smartphones.

The massive cost of such cameras would act as the major barrier to the growth of the market. In addition, Existing industrial 3D solutions are typically too complicated and costly for many simple 3D applications, despite their use in different industries such as logistics, automotive, and gaming. Because these cameras are so expensive, only a small portion of end-users is interested in them. As a result, despite the increased capabilities, market sales are lower when compared to other camera technologies such as 2D. Additionally, greater prices as compared to 2D alternatives would discourage many industry players to put further investments in the market. Moreover, the low penetration of these highly advanced cameras in some developing and underdeveloped countries would impact the market growth in the upcoming years. 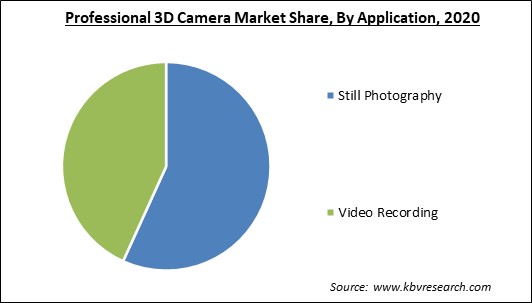 Based on Type, the market is segmented into Target Camera and Free Camera. In 2020, the target camera segment procured the maximum revenue share of the Professional 3D Camera. This is because of the technology's primary advantages; various market companies have begun to improve their target camera product lines. In addition, the region around the target icon that a person places when he builds the camera is viewed by a target camera. Because the target object is placed near the centre of attention, a target camera is easier to shoot than a free camera.

Based on Application, the market is segmented into Still Photography and Video Recording. The Video Recording segment collected a significant revenue share of the Professional 3D Camera Market in 2020. Where conditions and resources allow, video recording is an excellent technique of capturing raw contextual data in its entirety. In contextual data, video recording can assist a person to capture essential nonverbal communication cues.

Based on Technology, the market is segmented into Stereo Vision, Time of Flight, and Structured Light. The Time-of-Flight segment held a significant revenue share of the Professional 3D Camera Market in 2020. This is because 3D cameras employ the time-of-flight method to calculate the distance between the sensor and the nearest surface point. Moreover, TOF cameras are becoming more popular due to their inexpensive cost and appropriateness for general photography and consumer applications. Infrared light (lasers unseen to human sight) is used by a ToF camera to determine depth information, similar to how a bat senses its surroundings. In addition, the sensor sends out a light signal, which bounces back to the sensor after hitting the subject. The time it takes to bounce back is then calculated, allowing for depth mapping. This gives it a significant advantage over other technologies because it can properly calculate distances over a whole scene with just a single laser pulse.

Based on Regions, the market is segmented into North America, Europe, Asia Pacific, and Latin America, Middle East & Africa. In 2020, North America emerged as the dominating region in the overall Professional 3D Camera Market. Consumer demand has been stimulated in the region as a result of the device's ability to deliver high-quality images. In addition, rising interest in wildlife, fashion, and wedding photography has fuelled the regional market. In addition, sophisticated features such as DSLRs with HD video and picture quality have established a market for people to be interested in.