The Global 3D Camera Market size is expected to reach $57.8 billion by 2027, rising at a market growth of 34.5% CAGR during the forecast period.

A 3D camera is an integrated computing device that assists the person or user wearing it in improving daily activities. The introduction of mobile wireless technologies, such as smartphones, has ushered in a new era for 3D cameras around the world. Gadgets that were previously thought to only be utilized in industrial and commercial settings are now finding their way into the lives of ordinary people, improving their quality of life through a variety of applications including healthcare, sports and fitness, lifestyle, and others.

During the forecast period, the 3D camera market revenue is expected to expand significantly. This is due to factors such as the entertainment industry's increased demand for 3D content, advancements in 3D scanning technology, and enhanced user taste and preferences. The expected development in home automation applications, virtual reality applications, and automated operations in industries will provide attractive prospects for key players in the 3D camera market in the future.

Owing to the rapid development of new technologies for collecting images and light, photo technology has advanced dramatically over the years. With a smartphone app, the user can now create totally immersive experiences and capture lifelike images with unparalleled quality levels. These days, even an average iPhone or iPad can shoot a decent photo.

The stereo camera — a photographic device that can record multiple points of view from separate camera lenses – was the forerunner of the 3D camera. It's possible to create depth perception in images by 3D scanning an area from numerous perspectives and making people or objects appear practically popping out of the page. One could capture an immersive point cloud in time and convert it into a 3D image that appears almost real enough to touch with the correct 3D photography. Stereoscopy is the technology behind this illusion, which is why 3D photo capturing is commonly referred to as stereoscopic imaging. 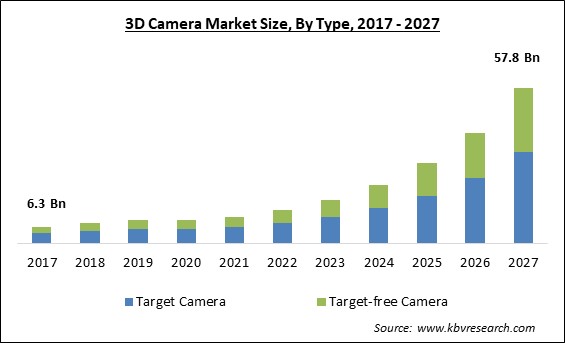 The COVID-19 pandemic has had a negative impact on the electronics and semiconductor industries. The price of graphic cards and processors reached an exorbitant amount. Since 3D cameras are equipped with semi-conductors as well, the 3D camera market also suffered as a result. Businesses and manufacturing facilities in several nations were closed due to a spike in COVID-19 cases, and it largely remained the case for 2020 as well.

In addition, the partial or total lockdown has affected global supply networks, making it difficult for manufacturers to reach customers. The COVID-19 pandemic is wreaking havoc on society and the world economy. The impact of this outbreak is growing by the day, hurting the industry. The crisis is causing stock market volatility, a drop in various companies’ confidence, a major slowdown in the supply chain, and an increase in panic among customer segments. Due to the implementation of strict measures such as countrywide lockdowns, manufacturing operations in Asian and European counties came to a hold. As a consequence, many businesses incurred a substantial loss of business and profits.

Increased Demand For 3D Cameras in the Entertainment Industry

It has become easier for new participants to enter the 3D camera industry due to a significant increase in demand for 3D movies, games, and videos. The entertainment industry's expanded visual applications are driving the 3D camera market. The entertainment business is expected to increase globally as a result of the introduction of 3D technologies in cameras. For example, Weta Digital's latest camera was utilized to shoot a film in Hollywood, with DNEG, Framestore, and MPC generating stunning futuristic cityscapes. The popularity of the 3D camera in filmmaking has spawned a slew of new 3D filmmakers, and the future will see an increase in the frequency of 3D films, resulting in a long-term 3D camera industry.

Advancement in 3D cameras is predicted to promote the usage of 3D cameras in the automobile industry. By recognizing and locating individuals in the vehicle, ZF has developed a 3D (IOS) interior camera that can readily enhance automation and safety systems. In autos, 3D cameras are employed as range cameras to determine the car's position on the road. The driver is notified about a car approaching from behind using these sensors in the system, allowing him to change lanes. It also identifies lane deviation and notifies the driver by vibrating the seat. These innovations will accelerate the deployment of 3D cameras in the automobile ADAS and safety systems market. Furthermore, autonomous trucks and self-driving vehicles are progressively gaining traction in the automotive industry, boosting demand for 3D cameras even more. In autonomous vehicles, 3D cameras are frequently used to improve drivability.

A 3D camera is a complex piece of technology and since the technology is still in its infancy, there are certain difficulties the manufacturers have to face, one of which is the costly manufacturing procedure. Hence, cost difficulties are the most significant impediment to the expansion of the 3D camera market. Existing industrial 3D solutions are typically too complex and expensive for many "simple" 3D applications, despite their use in different industries such as logistics, automotive, and gaming. Because 3D cameras are so expensive, only a small segment of the market is interested in them. As a result, despite the increased capabilities, market sales are lower when compared to other camera technologies such as 2D. This is mostly due to the cost problem. 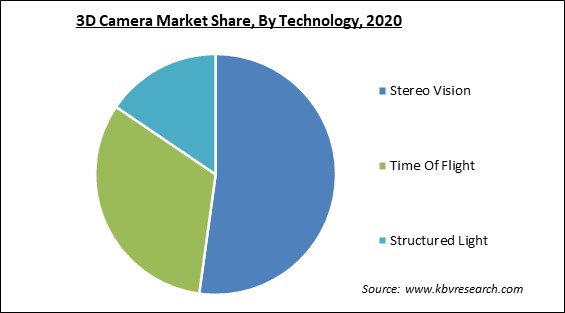 Based on Type, the market is segmented into Target Camera, and Target-free Camera. The target camera segment acquired the largest revenue share in the 3D camera market in 2020. This is because, as a result of the technology's primary advantages, various market companies have begun to improve their target camera product lines. This trend would continue to flourish in the coming years and hence, contributing to the growth of the segment.

Based on Technology, the market is segmented into Stereo Vision, Time of Flight, and Structured Light. The time of flight segment witnessed a significant revenue share in the 3D camera market in 2020. This is due to the widespread use of the technology in smartphones, drones, healthcare, industrial, automotive, and other applications. The system is resistant to ambient time and uses a single viewpoint to calculate depth, making it resistant to occlusions and shadows while maintaining clean depth borders. As a result, in the automobile and industrial sectors, it is most preferable to maintain safety by recognizing moments and gestures and providing real-time information.

Based on Application, the market is segmented into Professional Cameras, Smartphone, Tablets, Computer, and Others. The professional cameras segment acquired the largest revenue share in the 3D camera market in 2020. The usage of 3D professional cameras to capture live-action films is projected to increase as the demand for 3D films grows. Films are shot with stereoscopic cameras. To save time and money, professional 3D cameras are favored over expensive computer-generated imagery (CGI).

Based on Regions, the market is segmented into North America, Europe, Asia Pacific, and Latin America, Middle East & Africa. The Asia Pacific acquired the highest revenue share in the 3D camera market in 2020. It is owing to factors such as increasing smartphone penetration, a growing entertainment industry, rising disposable income, and low camera ownership. In addition, the expansion of the manufacturing sector in the developing nations of the region would further augment the growth of the regional market.

The major strategies followed by the market participants are Product Launches. Based on the Analysis presented in the Cardinal matrix; Samsung Electronics Co., Ltd. and Intel Corporation are the forerunners in the 3D Camera Market. Companies such as FARO Technologies, Inc., Panasonic Corporation, Sony Corporation are some of the key innovators in the Market.

Rising Application of 3D Cameras in Vehicles are driving the market in coming years, however, 3D Cameras are Expensive limited the growth of the market.

The Stereo Vision segment acquired the maximum revenue share in the Global 3D camera market by Technology in 2020; thereby, achieving a market value of $29.1 billion by 2027.

The North America market dominated the Global 3D camera market by Region in 2020, and would continue to be a dominant market till 2027.

Yes, COVID-19 pandemic has had a negative impact on the electronics and semiconductor industries. Due to the implementation of strict measures such as countrywide lockdowns, manufacturing operations.