The Global Optical Film Market size is expected to reach $32.2 billion by 2028, rising at a market growth of 7.5% CAGR during the forecast period.

Optical films are used in TFTs (thin film transistors), LCD (liquid crystal display) panels, and OLED (organic light-emitting diode) panels, to name a few. Desktop monitors and laptops, cellphones and tablets, televisions, and other large displays all use optical films. One of the key causes pushing the usage of optical films is manufacturers' rising need for them in LCDs and LEDs. Many factors influence the international market growth, including major drivers, restraints, prospective opportunities, and the role of various important rivals. The wide variety of applications of optical film is expected to accelerate market growth in the upcoming years. 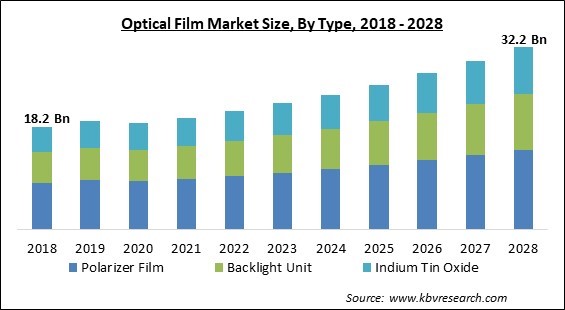 The thickness and atomic layers differ from one coating to the next, as the thickness has a significant impact on how the optical film functions, with a particular emphasis on the fact that different thicknesses can be tailored to be effective at specific wavelengths of light. While the thickness will vary depending on the application, the coating must be at least 500 nm thick to be effective against all visible light wavelengths. Anti-reflective coatings are included in the category of thin film coatings that can be applied to optical components.

To achieve the desired optical effect, thin film coatings might have hundreds of distinct layers, and computer simulations to establish the optimum layer sizes and composition can take days. As computational power has increased over time, optical coatings have gotten more complex and effective. Anti-reflective coatings are a common example, but other applications include color separation filters, telescope mirror coatings, energy-saving glass, halogen lamps, and surface plasmon resonance (SPR) detectors, to name a few. Optical coatings will be found on almost all optical components in high-end optic and photonic equipment.

Due to a workforce shortage, most businesses have ceased operations. However, due to the impact of COVID-19, the international optical film industry is sluggishly declining. Furthermore, import and export activities were severely hampered, thereby impacting sectors that use optical films and, as a result, the international optical films market. A significant percentage of pre-COVID-19 workers in various industries, such as electrical and other third-party suppliers, returned to their hometowns owing to uncertainty and lack of income during the lockdown. This lack of manpower availability is had a direct impact on production and manufacturing activities, resulting in a reduction in the advanced material industry, which, in turn, has hampered the growth of the optical films market over the projection period.

Optical films play a crucial role in the manufacture of cellphones. In the display screen, a variety of optical films are employed in huge quantities to provide surface protection, anti-glare, visual privacy, and a variety of other functions. Smartphone demand is rising internationally, owing to increased production and sales, and this is likely to boost market growth during the forecast period. According to the India Brand Equity Foundation, the smartphone market is predicted to grow rapidly in 2022, with shipments totaling between 190 and 200 million units. Similarly, according to the Consumer Technology Association's (CTA) October 2020 forecast, smartphone sales will increase in 2022, with 76 percent of all handsets having 5G capabilities.

The international optical films market is being driven by rising demand for large format displays in areas such as advertisements, healthcare, education, and others, as well as the growing popularity of organic light-emitting diode (OLED) technologies in the display industry. Optical films have features such as being thin, light, flexible, and durable. As a result, the growing demand for foldable and flexible displays in tablets, smartphones, and other electronic devices is expected to provide lucrative growth possibilities for the optical films market in the coming years. One of the most common uses for optical films is television. Several optical films, ranging from polarizing film to polyvinyl alcohol film, are widely used in the production of television sets around the world. 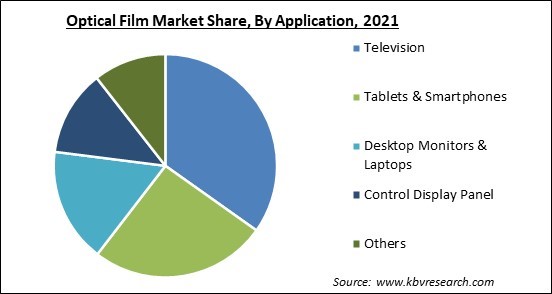 Indium and ITO costs have risen dramatically in recent years due to the reliance on newly mined and refined indium, as well as the rapid development of the display industry. Despite the fact that indium recycling and robust ITO TCOs made via cylindrical and planar sputtering are helping to stabilize supply, cost-conscious consumers are nonetheless concerned about price volatility. Because indium is a vital component that is both rare and expensive, finding a different route and optimizing it is critical. There have been cases where cost and performance have been successfully balanced. One current option is the unique application of TCO coatings on polymer substrates.

Based on Application, the market is segmented into Television, Tablets & Smartphones, Desktop Monitors & Laptops, Control Display Panel, and Others. The tablets and smartphones segment garnered a substantial revenue share in the optical film market in 2021. The smartphone industry has developed tremendously in the past few years due to the rapid adoption of smartphones by consumers in both developing and developed countries. The sales of tablets also grew during the pandemic because students used them for their online classes.

Based on Type, the market is segmented into Polarizer Film, Backlight Unit, and Indium Tin Oxide. This is because it is a common optical film found in nearly all electronic devices and services. The polarizing film has a wide range of applications, from televisions to photovoltaics to digital signage. This optical film is placed at the front of the display screen and has great qualities such as anti-reflection, higher display contrast, wide viewing angle, deeper color appearance, and so on.