The Global Liquid Smoke Market size is expected to reach $109.43 million by 2027, rising at a market growth of 9.70% CAGR during the forecast period.

Liquid smoke is a red to yellow colored liquid, which is a flavoured water-soluble alternative for cooking food with wood smoke. It is a natural byproduct of burning wood. When a wood is burnt, it produces smoke, steam, and water vapour, which is condensed through coiled tubing to capture the smoke. This liquid is then processed & purified into a thick liquid to eliminate its impurities like ash and soot. Further, it can also be used to flavour meats and vegetables.

Liquid smoke is produced on commercial basis for the US and European meat sector and is also regulated by the governments of the respective countries. Another name for liquid smoke is wood vinegar and it is produced domestically in Indonesia, Malaysia, Japan, Brazil, Southeast Asia and China. 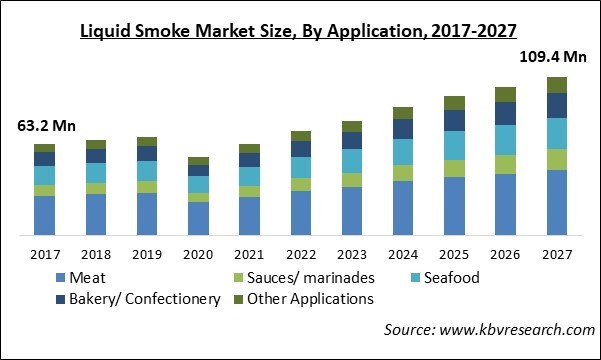 The COVID-19 pandemic had a significant impact on the growth of the Liquid Smoke Market. Whilst the pandemic, lockdowns were announced that hindered the manufacturing industries. The restaurants were also not able to open their outlet, which leads to a loss in demand as well as revenue. As a consequence, production capacity took a hit and decreased which detrimentally impacted the development of the Liquid Smoke Market.

The sudden lockdowns, hoarding exercises and budget cuts have negatively impacted the consumption of Liquid Smoke since it was not in the priority for most households. Restaurants were shut down and many went out of business, which negatively impacted the demand for the condensate product. Cooking for comfort became a luxury when the world was trying to have balanced meals to boost their immunity. Liquid Smoke remained as a backburner for chefs and dilettantes, but other than that most of its consumers focused on more essential products, which caused a great dip in the consumption of liquid smoke.

The reduction in the cost of production that is caused by the increasing acceptance of liquid smoke equipment within leading players is estimated to provide lucrative opportunities to the liquid smoke market players. Since environmental conditions are constantly changing, the conventional form of barbeque for smoking is becoming less popular. By using liquid smoke, customers don’t need to set up barbeque in their garden, which reduces their overall cost.

Growing demand and introduction of new flavors in the market

Customers are getting familiar with liquid smoking products that are leading to the expansion of flavor palette in the food and beverage industry. Several food restaurants are widely using liquid smoke to prepare some unique drinks as well as food products. Furthermore, several manufacturers are highly investing in the research and development activities to make new flavors of liquid smoke that can attract more customers.

Smoke in any form is a controversial ingredient since it contains various chemical compounds that can be very dangerous for the human health. Some studies suggested that liquid smoke contain cancer-causing chemicals, which is totally depend on the type of wood used in making the liquid as well as the condition of processing it. Several food safety organizations across different parts of the world are issuing guidelines to the liquid smoke manufacturers to label their products describing their composition. 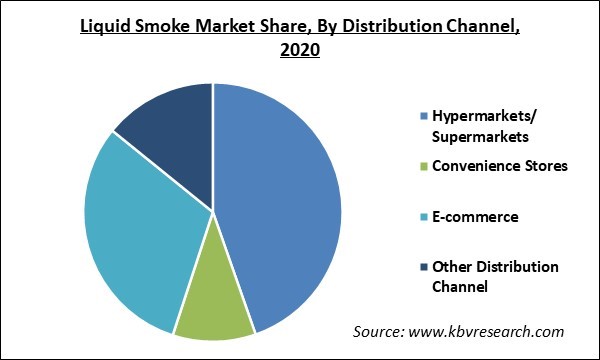 Based on application the market is divided into Meat, seafood, sauces, marinades, bakery/confectionery and others. The Meat segment acquired the maximum revenue share in 2020 and is estimated to witness a promising growth rate over the forecast period. The growth is a result of a surge in the population of non-vegetarian customers across the globe. Meat is one of the most consumed non-vegetarian items that go perfectly with liquid smoke.

Based on type, the liquid smoke market is segmented into Hickory, Mesquite, Applewood and others. The Hickory segment dominated the liquid smoke market with the highest revenue share in 2020 and is estimated to display a promising growth rate over the forecast period. It is due to the versatility of Hickory as compared to other forms of liquid smoke as it can be used with fish, red meats and even vegetables.

By region, the market is analyzed across North America, Europe, Asia Pacific and LAMEA. Europe emerged as the leading region in the liquid smoke market with the largest revenue share in 2020. The most commonly food preparation process across different nations of the region is barbeque, the smoky flavor of different food products is always on the top of food list of the consumers. Due to this, the adoption of liquid smoke flavor would witness a rise over the forecast period.

Growing demand and introduction of new flavors in the market are driving the market in coming years, however, health effects of using liquid smoke limited the growth of the market.

The Europe market dominated the Global Liquid Smoke Market by Region in 2020, and would continue to be a dominant market till 2027; thereby, achieving a market value of $42.16 million by 2027, growing at a CAGR of 9.4 % during the forecast period.