The Global Laser Diode Market size is expected to reach $12.4 billion by 2028, rising at a market growth of 13.2% CAGR during the forecast period. 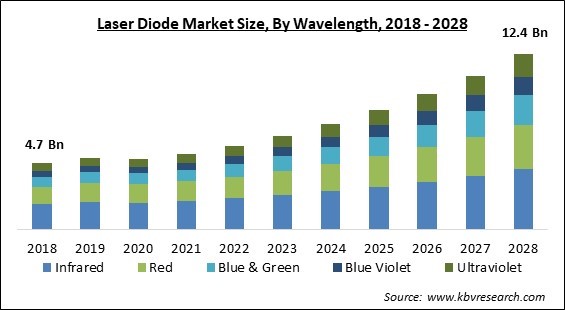 The wavelength of the output beam, which in modern laser diodes spans the infrared to UV spectrum, is determined by the semiconductor material selected. The most prevalent kind of laser manufactured is laser diodes, which have a variety of applications. Using a phosphor, similar to that on white LEDs, laser diodes can be utilized as general lighting sources.

The doped p-n-transition, which is driven by voltage, enables the mixing of an electron and a hole. Radiation in the manner of incident photons is produced when an electron drops from a higher level of energy to a lower one. This is an unintentional emission. When the procedure is carried out repeatedly and new light containing the same phase, coherence, and wavelength is created, stimulated emission can result.

The p-n junction in a regular diode functions like a turnstile, allowing electric current to flow only in one way (known as a forward-biased operation). When electrons pass over this barrier and join with holes on the other side, photons—packets of light in the visible range. From an electrical point of view, a laser diode is actually a PIN (P-type Intrinsic N-type) diode.

Manufacturers can take benefit from the additional possibilities in laser items to diversify their sources of income. The COVID-19 pandemic-induced shutdown of movie theatres has had a significant negative influence on the market's growth as has the media & entertainment sector's decreased adoption of new laser projectors. Different methods to make a different form of laser diodes has fueled its versatility. Therefore, it is seen that the pandemic had a negative impact on the laser diode market which is turning positive after the advent of innovations in the market.

Surge In The Usage Of Laser Diodes In Industrial Applications

From 790 nm to 980 nm, the laser industry has seen a surge in the demand for high-power, high-brightness lasers. There is a surge in the high-power lasers being used in production for defense, medical, consumer electronics, and fiber laser pumping. Multimode semiconductor lasers, which have a larger emitter and can produce more power than single-mode laser diodes, are high-power laser diodes. The output power changes according to the desired wavelength.

As the industry has grown, 660 nm laser diodes have been accepted for a variety of uses, including professional line laser beams and measurement lasers. Red light has a particularly deep depth of penetration into biological tissues that are roughly 2-3 mm in the case of human skin. This penetration depth is characteristic of light in the 670-690 nm band, which is somewhat higher than the wavelength stated previously.

The entire laser diode market is significantly constrained by the higher initial investment needed for laser diodes in comparison to other light-emitting diodes. The power of the lasers needed for various systems, processes, and applications ranges from a few hundred to thousands of watts. Although using laser products in the industrial and automotive sectors would lower labor costs, installing laser items is quite expensive. Installing laser-enabled goods often costs more than using the standard technique. 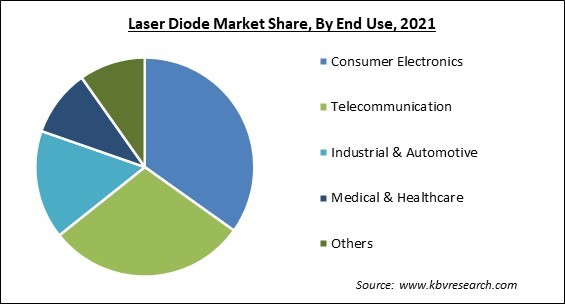 On the basis of end use, the laser diode market is divided into telecommunication, industrial & automotive, medical & healthcare, consumer electronics, and others. The consumer electronics segment procured the largest revenue share in the laser diode market in 2021. The wavelength of the output beam, which in modern laser diodes spans the infrared to UV spectrum, is determined by the semiconductor material selected. 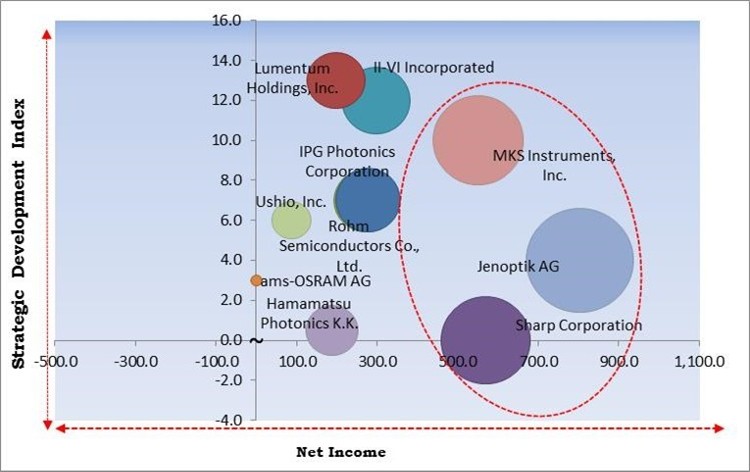 The major strategies followed by the market participants are Product Launches. Based on the Analysis presented in the Cardinal matrix; Sharp Corporation, Jenoptik AG, MKS Instruments, Inc. are the forerunners in the Laser Diode Market. Companies such as ROHM Semiconductors Co., Ltd., II-VI Incorporated, Lumentum Holding, Inc. are some of the key innovators in Laser Diode Market.