The Global Drone Simulator Market size is expected to reach $1.6 billion by 2028, rising at a market growth of 12.9% CAGR during the forecast period.

A drone simulator is a system of computers and software that simulates a drone and its dynamics to give users a synthetic environment for practicing drone flight. The pilot can practice simulating an unmanned aircraft and payload on the simulator. Additionally, it aids drone operators in ensuring the highest level of security and safety. Drone flight simulation uses various hardware components, including simulator screens, flight controls, and software support, to artificially recreate the drone flight environment for the benefit of pilot training and operation. The affordability of simulator training, rising demand for drones in both commercial & military applications, and intellectual capabilities are anticipated to be the main drivers of drone simulator demand. 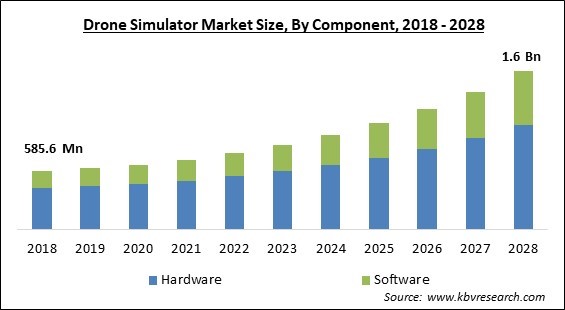 The main participants in the drone simulator market ecosystem are well-known businesses and startups that offer simulators and their services, end users, and distributors/suppliers/retailers. Armed forces from several nations have been using drones for more than ten years. Small drones are frequently used by ground forces. Unmanned aerial vehicle (UAV) spending is increasing as a percentage of total military spending, which is fueling the expansion of specialized drone manufacturers & simulator software producers.

In about 95 countries around the world, military drones are already in use. There are a number of drones being developed specifically for surveillance. On the other hand, some drones have been created for crucial tasks like delivering weapons. Remotely controlled UAVs (unmanned aerial vehicles) are used by nations like China, Germany, India, and Azerbaijan to transport weapons for their armed forces. Drones are additionally used as loitering weapons. Additionally, drones are utilized in real-time surveillance, intelligence, and reconnaissance (ISR) operations to gather information on ongoing and potentially fatal military operations. Consequently, the factors mentioned above are increasing demand for drone simulators.

The production volume of drone manufacturers drastically decreased, which slowed the adoption of various simulation solutions. The governments of several nations have kept their levels of defense spending, though. This has prompted a number of UGV, weapon, and combat system producers to speed up the rate at which simulation systems are being purchased. As a consequence, the COVID-19 pandemic and its effects have had a negligible effect on the drone simulator market.

Comparatively speaking to training that involves using actual drones, training pilots using a drone simulator is more affordable. Training with real drones can be expensive and accident-prone, which could result in drone damage. Therefore, it is thought of as giving the pilot virtual training to aid in controlling the drone before they operate in real-time. Drone simulators can be utilized repeatedly to give pilots more extensive training. Drone simulators are being used by drone training facilities to train pilots. The market for drone simulators is anticipated to grow as a result of the lesser cost of simulator training.

Due to the COVID-19 outbreak's depleting financial resources, governments all over the world are reducing their military spending. The military departments of many countries are reducing their training budgets and force sizes. As a result, the military is now more focused on locating less expensive & more practical answers to their problems. Real-time training is time- and money-consuming. Additionally, it entails a significant amount of raw materials, like gasoline and explosives, and is extremely dangerous. Therefore, virtual training as well as simulation-based games that employ technologies like AI, big data, and cloud computing are becoming more and more popular among military ministries.

Flight operations and unmanned aerial systems (UAS) involve high-risk air travel, especially beyond the visual line of sight. Their long-distance operations raise the risk of property damage, mishaps, and financial losses. As a result, due to inadequate air traffic management, safety and security concerns, and no-fly zones, several countries have strict regulations regarding the use of UAVs in close proximity to international borders, airports, government buildings, no-fly zones, and temporary flight restriction zones. Currently, drones are not allowed to fly in civil airspace, with the exception of a few businesses that have been granted exemptions to conduct tests and make demonstration flights. These issues limit the expansion of the drone market, which in turn restrains the expansion of the drone simulator market.

Based on application, the drone simulator market is segmented into commercial and military. In 2021, the military segment dominated the drone simulator market by generating maximum revenue share. This is because of the accessibility and low cost of drone simulators for military pilot and operator training as opposed to live training using actual drones. Drones significantly lower the amount of time military personnel spend in danger or in battle. Four, drones are proving to be just as deadly in combat with the enemy as regular aircraft. 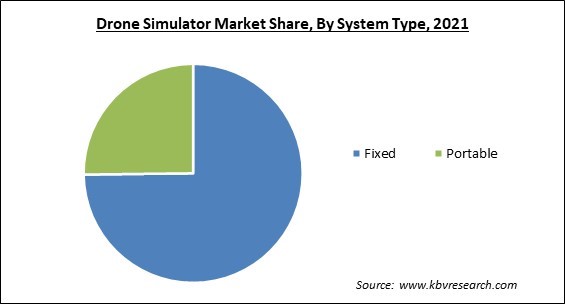 Based on drone type, the drone simulator market is classified into fixed wing, and rotary wing. In 2021, the fixed wing segment accounted for the maximum revenue share in the drone simulator market. In general, rotary-wing drones, like helicopters and quadcopters, are used for commercial purposes while fixed-wing drones are typically used for military purposes. Fixed-wing drones are used by armed forces for military and defense purposes all over the world.

Region wise, the drone simulator market is analyzed across the North America, Europe, Asia Pacific and LAMEA. In 2021, the North America region dominated the drone simulator market with the highest revenue share. This is due to the presence of numerous drone businesses, manufacturers, and software firms in the United States and Canada. The American Army is putting a lot of effort into R&D and drone technology advancements. These elements are predicted to support regional growth over the course of the forecast period in the upcoming years.