The Global Capacitive Tactile Sensor Market size is expected to reach $6.4 billion by 2028, rising at a market growth of 9.8% CAGR during the forecast period.

By detecting the change in capacitance within its projected field, capacitive sensing technology may identify the presence of a conductive object. However, it might be any conductive object with a dielectric other than air, but, generally it is a human finger. There is a huge spike in demand for Internet of Things (IoT) solutions and industrial automation in developing nations like South Korea, Australia, Germany, and France. 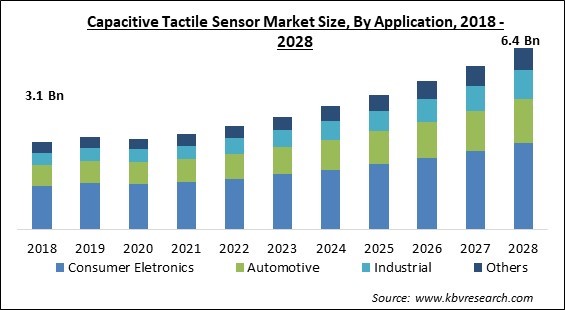 With the rising investments by major players in certain regions, numerous market players are introducing latest products with advanced features in the region. There is an increasing adoption of touch-based display technologies along with increased government initiatives for digitalization, and the boom in industrial applications of touch-based panels and equipment. Rising consumer Electronics application demand is leading to higher adoption of capacitive tactile sensors.

The sensor consists of an electronic driver that transforms oscillation variations into voltage, an electronic device that displays and records the voltage change, and a probe that measures the target's distance. It is frequently used for the detection and monitoring of location, proximity, and acceleration in tablets, mobile phones, computers, track pads, cars, and aerospace components. Compared to conventional resistive or inductive sensors, capacitive sensors are more robust, and sensitive, and provide more accurate data.

Significant worldwide consumer Electronics sector expansion, as well as greater automation of challenging production processes, are the main factors that positively impact the market. By identifying the presence and placement of unwanted metal objects, capacitive tactile sensors, which are frequently found in smartphones, laptops, and gaming consoles, assist process control in manufacturing units.

Rapid Development Of The Automotive Sector

The automated vehicle has nested position, capacitive, humidity, temperature, and sensor components. The infotainment system, keyless entry, 3D gesture, and interior lighting control all make use of these sensors. As the number of vehicles on the road increases worldwide, the market for various sensors, in particular the capacitive tactile sensor, is expected to grow during the forecasted period. These sensors, for instance, can identify things that are in the way of a car that is reversing and can sound an alarm to alert the driver. 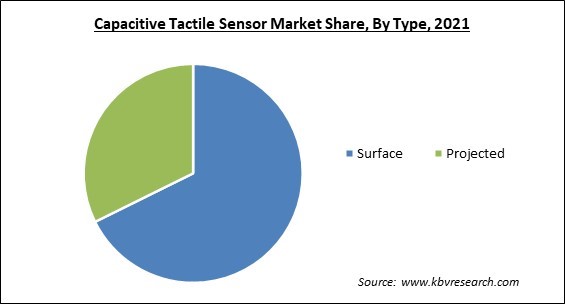 The Rise In Consumer Electronics Demand

Major Smartphone makers like Samsung employ capacitive touch sensors in their products. The launch of 5G goods & services, as well as an increase in demand in developing nations like India, Indonesia, and Russia, are anticipated to contribute to the swift expansion of the worldwide smartphone industry. Researchers are exploring unique uses in addition to the conventional ones found in touchpads and tablets. Due to the increasing use of touch panels in consumer Electronics applications like smartphones, laptops, tablets, ATMs, office equipment, automated doors, lamps, smart TVs, automatic electronic devices, electronic security systems, elevators, etc., tactile sensors are expected to experience rapid growth in the coming years.

Both capacitive and resistive tactile sensors have problems with long-term loading. However, capacitive sensors are frequently created using a material that is similar to silicone elastic. Therefore, the material between the two electrodes may creep when weight is applied to the pressure sensor. Even while the load itself doesn't change over time, this can lead to extremely minor changes in sensor output. It is usually not a problem that capacitive sensors aren't really designed for weight measurement applications. However, some applications do call for a load cell's stability.

On the basis of application, the capacitive tactile sensor market is fragmented into consumer Electronics, automotive, industrial and others. The automotive segment covered a significant revenue share in the capacitive tactile sensors market in 2021. Due to the growing information exchange between social and different systems in cars, human-machine interface technologies have undergone a paradigm shift. Owing to its use in human-machine interface (HMI) applications including interior illumination control and navigation control, the demand for capacitive sensors has increased as a result.