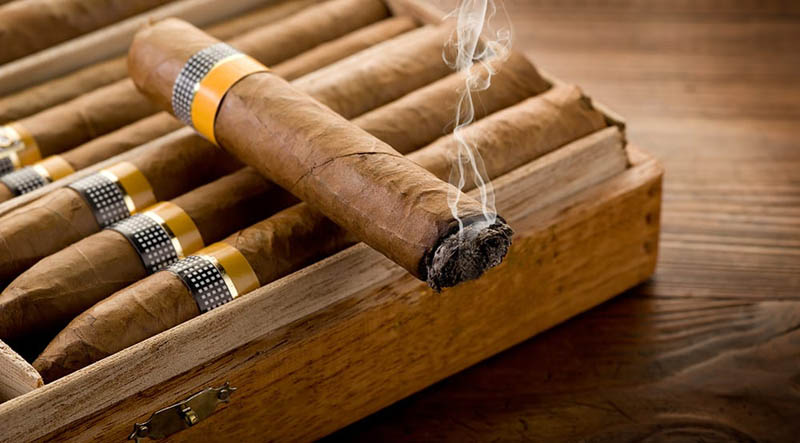 Earlier, tobacco was smoked and chewed by numerous people, and when it became a cash crop, a large number of people started cultivating it. Tobacco is one of the major sources of tax revenue for governments across the globe. The disposable incomes of people have increased over the past few years and due to hectic lifestyles consumption of cigarettes has increased as consumers believe that it is helpful in reducing stress and anxiety.

The flavored smokeless tobacco, large cigars hookah, little cigars, e-cigarettes, and cigarillos, and many innovative products have been introduced in the market by the manufacturers. Thus the demand for tobacco will increase in the coming years.

Tobacco is the general term used for any product prepared from tobacco leaves. Tobacco is obtained from a plant of genus nicotiana and the family Solanaceae. There are many species of the tobacco plant in the genus nicotiana but N.tabacum is the commercial crop. The tobacco plants are nightshade plans, and most of these plants contain nicotine. In some places, tobacco is declared as an invasive weed.

Tobacco is obtained from the leaves of tobacco plants. The plant is cultivated annually. It is grown in warm and well-drained soil. Harvesting of tobacco is done in various ways. Either the entire plant is harvested by cutting stalk close to the ground or leaves are pulled off. Nowadays it has become a machine-dependent process, various tobacco harvester are available providing cost-effective harvesting options to the cultivators.

Tobacco has been used from the very ancient history dated back to 1400 BC. It was smoked ceremonially. Historically, people used to carry tobacco in pouches. Later, tobacco gained huge popularity and became a major industry in Europe. In the 18th century, tobacco become a major cash crop across the globe. The increased scientific research revealed the health hazards of tobacco, and thus various restriction has been posed in the cultivation and sale of tobacco.

There are different types of tobacco available in the market.

White burley: It is air-cured leaves tobacco. White burley is comparatively milder than other types of tobacco.

Perique: Its cultivation started in the early 1800th century. It is used in making blended pipe tobacco. The smell of perique is very strong. Some people chew this tobacco, but nowadays it is completely banned to chew perique.

Products made up of tobacco

There are two types of smokeless tobacco that are chewing tobacco and moist sniff. Chewing tobacco is the dried loose leaf of tobacco plugged and twisted. While snuff is powdered, dry, moist that is packaged in sachets.

The cigarette is a cylinder-shaped product containing psychoactive material like tobacco rolled into thin paper. It is either made individually by roll-on or produced commercially. The consumption of cigarettes is increasing in developing countries and decreasing in the higher income countries.

The cigar is made from blended tobaccos. The quality of cigars depends on the type of leaves used in them. Cigars are a roll of tobacco that is wrapped in the leaves of tobacco. There are various types of cigars, the small and narrow cigars are commonly known as cigarillos.

Consumers are nowadays preferring harmful tobacco products over cigarettes can be attributed to increasing awareness to live a healthy lifestyle.

Waterpipes are commonly included hookah, narghile, shisha, etc. they are available in a variety of flavors. Waterpipes are least toxic than cigarettes.

Are there any health benefits of tobacco?

Tobacco contains nicotine which gets absorbed in the body through blood. It stimulates some glands of the body to release hormones like adrenaline. This hormone is responsible for increasing heart rate, and blood pressure. Nicotine thus causes mood-lifting and makes one feel good. The products obtained from tobacco are able to provide stimulation and offer pleasure for consumers.

Is smoking healthy or unhealthy? This is the main question for those who are health conscious. Tobacco contains many harmful chemicals that have negative health effects on both smokers and passive smokers. So it would be not wrong to conclude that tobacco is not good for health, it may be more of an addiction. According to the WHO, more than 8 million deaths are caused by direct smoking of tobacco each year. Also, about 1.2 million died as a result of second-hand smoke.

The Tobacco Market has been witnessing rapid growth due to increasing demand for tobacco products. Tobacco is prepared from the tobacco leaves. There is various type of product available in the market like smokeless tobacco, large cigars hookah, little cigars, e-cigarettes, and cigarillos, etc. as tobacco contains nicotine it causes mood lifting. Despite having many harmful health effects, the demand for tobacco is constantly increasing.

The Global tobacco Market has been anticipated to rise at a growth rate of 3.6% CAGR over the forecast period.

How to Choose the Best Video Management System