The Global Tobacco Market size is expected to reach $1,066.6 billion by 2026, rising at a market growth of 3.6% CAGR during the forecast period. Tobacco is an economically significant agricultural crop which is grown across the world. India is one of the largest producers and exporters of tobacco after China and Brazil. Consumption of tobacco in any form results in health risks & complications. The higher number of passive smokers are affected majorly due to the Tobacco consumption. The highly addictive nature of nicotine makes it difficult for the smokers to quit the tobacco consumption. Irrespective of the fact that tobacco causes serious harm to the health, tobacco industry is still booming due to its economic importance. The cultivation of Tobacco is largely in the southern states of India, as weather is suitable for the cultivation of the crop.

In recent years, the global increment in the number of smokers has been witnessed. New product launches which include numerous flavored tobacco products like menthol cigars & clove cigarettes is one of the major factors boosting the trend of tobacco consumption. This aspect is anticipated to fuel the market growth over the forecasted period. In addition, the increasing preference of smoking alternatives leads to the launch of innovative tobacco products with unique tastes options has been witnesses across the globe. Due to this factor, manufacturers are planning to launch premium tobacco products added with flue-cured tobacco and fine whole leaf. 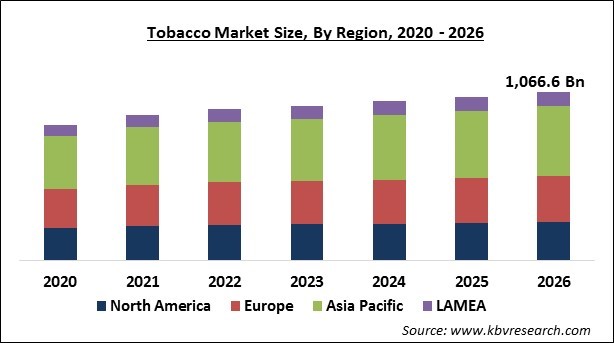 Based on Product, the market is segmented into Cigarettes, Cigar & Cigarillos, Next Generation Products, Water Pipes, Smokeless Tobacco and Other Products. The cigarettes segment acquired the prominent market share in 2019. The cigarette refers to a cylinder-shaped product that contain psychoactive material like tobacco rolled into thin paper. The consumption of cigarettes is increasing in developing countries and decreasing in the higher income countries. China is considered as one of the largest cigarette markets in the globe. In addition, the introduction of different types of flavors in the cigarette will further boost the adoption of cigarettes across the globe. 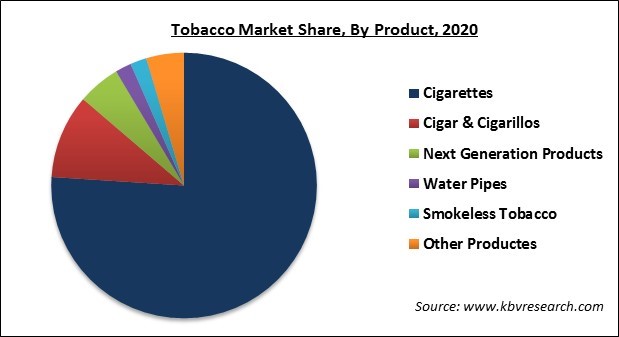 Based on Regions, the market is segmented into North America, Europe, Asia Pacific, and Latin America, Middle East & Africa. Asia-Pacific is among the largest producers & consumers of tobacco across the globe. The leading companies of the region are China and India. Four largest tobacco companies in the world are China National Tobacco Corporation, PT GudangGaramTbk, Japan Tobacco Inc., and ITC Limited are from Asia-Pacific. China is the biggest market in this region & the country is known for the significant portion of the population who are the consumers of tobacco products. of the easy availability of the tobacco products in contemporary retail outlets in this region acts as the major factor boosting the growth of the tobacco market in this region.

The major strategies followed by the market participants are Acquisitions. Based on the Analysis presented in the Cardinal matrix; Japan Tobacco, Inc., and British American Tobacco PLC are the forerunners in the Tobacco Market. Companies such as Swedish Match AB, Altria Group, Inc., Scandinavian Tobacco Group A/S, Korea Tobacco & Ginseng Corporation are some of the key innovators in the market.

The major factors that are anticipated to drive the tobacco industry include increasing preference for flavoured tobacco.

In 2019, the Asia Pacific garnered the highest revenue share of the global tobacco market.