The Global Tumor Ablation Market size is expected to reach $1.7 billion by 2025, rising at a market growth of 10.9% CAGR during the forecast period. Tumor ablation is a minimally invasive image-guided procedure that is used to treat liver, kidney, soft tissue, and bone tumors. By using heat, chemicals, and low temperature, this procedure ensures high efficacy of tumor treatment eliminating most of the possible side effects. Tumor ablation is a procedure that has achieved greater effectiveness in the treatment of tumor cells with limited toxicity or side effects. The destruction of tumors is done using heat, low temperature, and chemical agents, which are inserted through a small hole in the tumor regions with a guided needle.

The ongoing technological advancements have made tumor ablation treatment a safe and painless one especially due to impressive results during and after the procedure. With increasing awareness in the healthcare industry around the world, cancer ablation is becoming increasingly popular for different types of cancer as one of the most favored cancer therapy methods. Hospitals and healthcare centers are recognizing the immense potential of cancer ablation therapy, thereby supporting their patients with the facility that would further assist in facilitating the therapeutic. 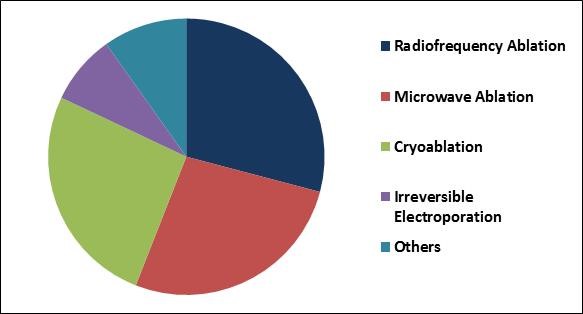 As the trend towards decreased invasiveness of medical procedures persists, image-guided percutaneous ablation has started supplanting surgery for local control of small tumors in the liver, kidney, and lung. New ablation techniques and refinement of existing technologies will make it possible to treat larger and more complex tumors in these and other organs. At the same time, advances in intra-procedural imaging aim to boost treatment quality and complications. Advancements in intraprocedural imaging have enhanced treatment preparation and provided a more accurate assessment of the ablation zone during treatment. As these techniques mature, the reason for percutaneous ablation continues to expand and ablation appears to be gradually supplanting for local tumor therapy.

The major strategies followed by the market participants are Acquisitions. Based on the Analysis presented in the Cardinal matrix, Medtronic PLC and Johnson and Johnson (Ethicon, Inc.) are some of the forerunners in the Tumor Ablation Market. Companies such as Boston Scientific Corporation, AngioDynamics, Inc., HealthTronics, Inc., Misonix, Inc., and EDAP TMS S.A. are some of the key innovators in Tumor Ablation Market.

According to a new report published by KBV Research, The Tumor Ablation market is projected to reach USD 1.7 billion by 2025.

The major factors that are anticipated to drive the Tumor Ablation industry include rising prevalence of cancer and high demand for safer therapeutic options, Technological advancement in ablation devices, and rise in the geriatric population.

The North America region was the dominating region in 2018.