The Global Tilt Sensors Market size is expected to reach $278.6 Million by 2025, rising at a market growth of 8.7% CAGR during the forecast period. Due to rising investment in transport initiatives, commercial infrastructure development activities, public facilities, and mining exploration activities across developing economies, the market is also expected to grow over the forecast period. In aerospace & defense industries the majority of the market for tilt sensor is expected to be expressed because of strong governments investments in drones, weapons platforms, aircraft, launchers and armored vehicles in cooperation with technology providers across all nations.

A tilt sensor is a device used in several angles of a reference plane to measure the tilt. For various applications, tilt sensors test the gravity tilting position. This makes orientation or inclination easy to detect. These may also be referred to as tilt switches or rolling ball sensors, similar to mercury switches. Such instruments have slowly become popular and adapted to a growing number of high-end applications. For example, the sensor provides useful data about the vertical and horizontal incline of an airplane, assisting the pilot in understanding how obstacles during the flight are dealt with. By recognizing the plane's current position and the angle at which the plane tilts to the surface of the earth, stunt pilots, the Red Arrows, can present a spectacular air show. Tilt sensors are a vital device for pilot decision-making. 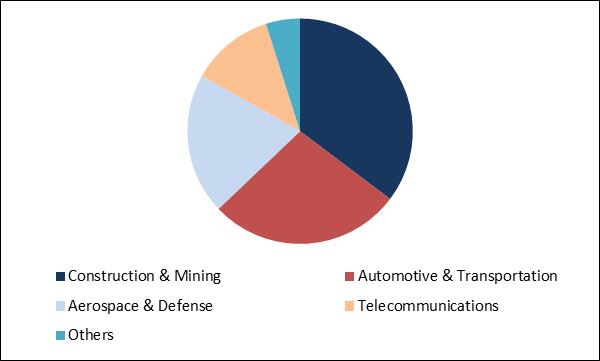 Based on Material Type, the market is segmented into Non-Metal and Metal. In 2018, the non-metal segment exhibited a dominant share and is explain to retain its dominance over the forecast period. This can be due to the immense demand for tilt sensors using high-grade material for plastic housing. Furthermore, the segment is likely to emerge over the forecast period as the fastest growing market.

Based on Technology, the market is segmented into MEMS, Fluid-filled and Force Balanced. Based on Application, the market is segmented into Construction & Mining, Automotive & Transportation, Aerospace & Defense, Telecommunications and Others. Based on Regions, the market is segmented into North America, Europe, Asia Pacific, and Latin America, Middle East & Africa. The technology has advanced and tilt sensors have switched from analog to digital, there has also been a rise in the number of ways in which tilt sensors can be incorporated into a variety of applications. In countries like the U.S., Singapore, Japan, Sweden, Switzerland, Norway, and Finland, electronic sensors are more prone to interference from analog signals and the change from analog to digital sensors is happening at a rapid rate. Furthermore, digital sensors are more accurate when it comes to CAN or BUS conversion adaptable data conversion.

The major strategies followed by the market participants are Product launches and Partnerships & Collaborations. Based on the Analysis presented in the Cardinal matrix, Murata Manufacturing Co., Ltd. and TE Connectivity Ltd. are some of the forerunners in the Tilt Sensor Market. The market research report covers the analysis of key stake holders of the market. Key companies profiled in the report include The Fredericks Company, Balluff GmbH, Baumer Holding AG, Sick AG, IFM Electronics GmbH, Jewell Instruments LLC, Meggitt Plc., Murata Manufacturing Co., Ltd., TE Connectivity Ltd. and MEMSIC, Inc.