The Global Syphilis Testing Market size is expected to reach $1.5 billion by 2028, rising at a market growth of 5.6% CAGR during the forecast period.

Syphilis is a bacteria-induced sexually transmitted disease (STDs) caused by Treponema pallidum. The very first two stages are the most contagious. The early phase of syphilis is the concealed, or latent, stage, during which the patient is unaffected. The disease is still present, but there are no noticeable symptoms. The second stage, tertiary syphilis, is the most dangerous to one's health.

Syphilis occurs in stages, each with its own set of symptoms. The stages, however, might intersect, and indications do not usually appear in the same order. The user could have syphilis for years without noticing any signs. A tiny sore called a chancre (SHANG-kur) is the first indication of syphilis. The sore occurs where the germs entered the body for the first time. While the majority of persons with syphilis get only one chancre, some develop numerously. The chancre usually emerges three weeks after exposure. Since the chancre is usually painless and can be concealed within the vaginal or rectum, many persons with syphilis are unaware of it. Within three to six weeks, the chancre would heal on its own.

Treponema pallidum subspecies pallidum is a Gram-negative, highly mobile bacterium with a spiral structure. Yaws (subspecies pertenue), bejel (subspecies carateum), and pinta (subspecies carateum) are three more human diseases caused by the Treponema pallidum subspecies. They do not cause neurological illness, unlike subspecies pallidum. It cannot survive without a host for more than a few days. This is because its tiny genome (1.14Mbp) lacks the metabolic pathways required to produce the majority of its macronutrients. It takes more than 30 hours to double in size. The bacterium is notorious for its capability to avoid the immune system along with its invasiveness. 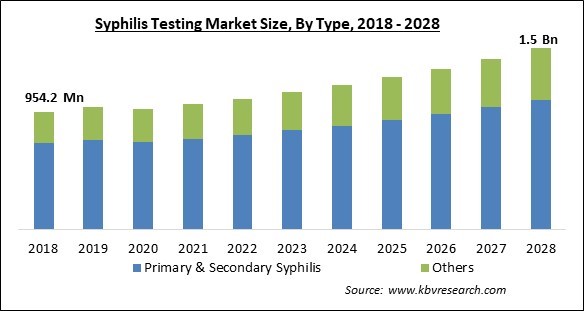 The overall impact of COVID-19 on the syphilis testing market is negative, owing to a decrease in the number of patient visits to hospitals and clinics for testing, as a result of the suspension of various elective surgeries and outpatient visits, which reduced the market's demand for syphilis tests. The COVID-19 pandemic is a public-health disaster that has harmed the STD testing industry. Before the pandemic, the number of sexually transmitted infection cases was significant, but after the pandemic, STD testing cases decreased. During the early months of the COVID-19 pandemic, testing reports of sexually transmitted diseases were down due to challenges in health care and sexually transmitted infection testing services.

Utilizing the social media platforms and the various campaigns by the NGO and various authorities are making people aware about the Syphilis testing market. During STD Awareness Week, which occurs during the second full week of April, people are encouraged to become aware of STDs and how they impact their lives. The goal is to reduce stigma, fear, and discrimination associated with STDs, as well as to make sure that people have the tools and knowledge they need to prevent, detect, and treat STDs. Many governments in developed and developing countries are attempting to raise public awareness about the necessity of early STD testing.

Impact of social taboos and stigmas

The extensive efforts to identify basic interventions that can help to reduce risky sexual behavior, altering one's behavior remains challenging. According to surveys, it is vital to focus on well-defined communities, interact extensively with specified target audiences, and incorporate them in the designing, implementation, and evaluation processes. There are still several stigmas associated with STDs that prevent people from being checked. Many STDs are thought to be stigmatized in society. In other words, persons who are infected with STDs are judged or condemned. Other diseases may also be associated with societal stigma. 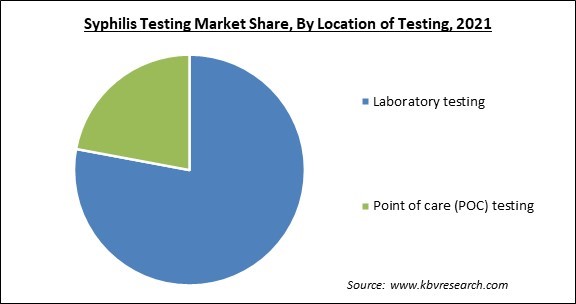 Based on Type, the market is segmented into Primary & Secondary Syphilis and Others. The Primary & Secondary Syphilis acquired the largest revenue share in the syphilis testing market in 2021. It is due to the increasing prevalence of syphilis infections as well as the availability of screening tests like automated treponemal tests (TTs), such as enzyme immune assays (EIAs) for primary syphilis and the RPR card as well as serological tests like VDRLs and USRs for secondary syphilis.

Based on Location of Testing, the market is segmented into Laboratory testing and Point of care (POC) testing. The Point of care (POC) testing segment registered a significant revenue share in the syphilis testing market in 2021. It is due to the majority of syphilis POC tests can be used as screening tests because they identify antibodies directed to Treponema pallidum (TP), the syphilis causative agent. People who have not got professional laboratory training can also undertake POC testing. It includes the use of nurses, doctors, paramedics, and patient testing. Malaria antigen testing, blood glucose monitoring, pregnancy tests, urinalysis, and other types of near-patient testing are only a few examples.

Based on Regions, the market is segmented into North America, Europe, Asia Pacific, and Latin America, Middle East & Africa. The North America region garnered the highest revenue share in the syphilis testing market in 2021. Due to the higher adoption rates for technologically advanced screening test methods, active efforts from governments and private organizations, and growing awareness of syphilis infections all contribute to the market's growth in North America. In addition, increased syphilis cases due to men having sex with men (MSM) and the introduction of mandated screening tests for all pregnant women in these regions would fuel the expansion of the syphilis testing market.

By Location of Testing