The Global Supercapacitor Market size is expected to reach $952.9 Million by 2028, rising at a market growth of 14.3% CAGR during the forecast period.

The energy is stored and released through reversible ion adsorption and desorption at interfaces between electrode materials & electrolytes in a supercapacitor, which is an electrochemical energy storage device. Supercapacitors, often referred to as ultracapacitors, are utilized for quick charge and discharge since they have negligible resistance and can store 10 to 100 times the power of conventional electrolytic capacitors. 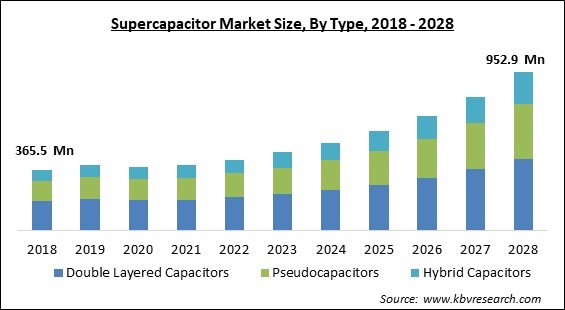 In the electronic device taxonomy, these fall into the capacitor and battery categories and are used to complement conventional batteries, which can also be utilized as a short-term backup power source because supercapacitor circuits support continuous power supply. The accelerated use of supercapacitors for EVs/HEVs, trains & aircraft, wind turbines, smart wearables, grid energy storage systems, and rail wayside are some of the major factors driving the growth of the supercapacitor market. These applications are especially in the automotive, energy, and consumer electronics industries.

A supercapacitor is a cutting-edge energy storage device that can offer greater power density than batteries & greater energy density than conventional capacitors. Solar illumination and solar PV panels are two potential applications for supercapacitors. Additionally, supercapacitors are dependable choices for solar panels because they are employed in both online and offline modes. The importance of environmental friendliness has raised users of energy storage equipment's awareness of the need to reduce emissions.

Major corporations are stepping up their efforts to cut greenhouse gas emissions, and market trends point to an increase in demand for alternative energy sources. An electrochemical double-layer capacitor's components are all made of easily biodegradable carbon in some way. The surge in the adoption of supercapacitors in automotive applications is a key element propelling the supercapacitor market's expansion. Supercapacitors are suitable for use in automotive applications due to a number of factors, including their high power density, long shelf life, & quick charging capabilities.

The market suffered in 2020 in all areas; however, with the economic recovery, the market has gained some pace. Power recovery & dynamic brake energy storage are two of the principals uses of supercapacitors in the automotive sector. It is predicted that the COVID-19 pandemic will have an impact on shared mobility services and public transit. This is anticipated to have an effect on both the production of cars and the market for supercapacitors. The digital economic revolution is also having an influence on the electrical sector as a result of the COVID-19 outbreak.

Supercapacitors are able to charge and release energy more quickly than conventional batteries, which carry out the same function much more slowly. These electrode- and electrolyte-equipped capacitors can rapidly charge and discharge over a very large number of cycles, making them an effective replacement for conventional batteries in a variety of applications. The usage of energy storage technology with little or no emissions is becoming more popular among consumers as environmental friendliness gains importance.

Region-wise, the supercapacitor market is analyzed across North America, Europe, Asia Pacific, and LAMEA. In 2021, the Asia Pacific region led the supercapacitor market with the highest revenue share. The consumer electronics & automotive industries are expanding quickly in China, which is likely to enhance the demand for supercapacitors there. This expansion is being fueled by rapid infrastructure development and industrialization. Because China is the world's largest producer of low-cost cars, the market for supercapacitors used in the automotive industry is expanding.