Global Stevia Market By Form (Powder, Liquid and others) By End User (Food and Beverages, Pharmaceuticals, Retail and other End Users) By Distribution Channel (Direct Channel and Indirect Channel) By Region, Industry Analysis and Forecast, 2020 - 2026

The Global Stevia Market size is expected to reach $1.1 billion by 2026, rising at a market growth of 10.3% CAGR during the forecast period. Stevia is a natural sweetener derived from a plant species known as Stevia Rebaudiana. It's a completely natural, zero-calorie sweetener 200 times sweeter than sugar. Stevia also contains a variety of antioxidants, including flavonoids, triterpenes, tannins, caffeic acid, kaempferol, and quercetin. With rising recognition and a large number of health benefits associated with its use, consumers are increasingly substituting stevia for sugar. Numerous food and beverage producers often use it in coffee, tea, smoothies, and yogurt to sell low-calorie items. 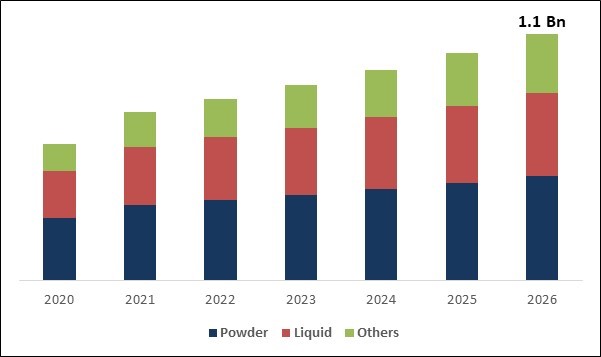 The most widely used sweeteners, sucrose, dextrose (glucose), and corn syrups are important for the manufacture of confectionery products such as hard candy, sugar, taffy, chewing gum, chocolate and gum candies. In addition to their role in these products, they are commonly used because of their low cost, availability, and ease of use during processing. The formulations of several sweetened confections rely on the properties of stevia. Depending on the confection, stevia helps to provide sweetness, enhanced mouthfeel, crystallization, texture, shape, extended shelf life, flavor, and color to the finished product.

Stevia's success has risen exponentially in the last 10 years. With the current power of health activists and the rise in sugar levies, food and beverage manufacturers will seriously consider using higher grades of stevia. Sugar replacement as well as the use of artificial sweeteners. As processes improve and recipes become more refined, Stevia's 2nd generation enzyme is well-positioned to push that grow upward. A sweeter, more cost-effective future.

Increased demand for natural sweeteners, particularly beverages, is expected to increase demand in the near future. Increased market penetration in the food industry due to its superior sweetening properties is expected to spur production.

With the sudden break of Covid-19 in late months of year 2019, the markets worldwide are unfortunately experiencing its grip. The suppliers and consumers of the products & Services are affected in a big way across the sectors resulting in declining revenues in last quarters of year 2019. The declining trend in market sizes is expected to not only sustain but will also amplify itself in year 2020 hugely disturbing the economies worldwide.

The global demand for sweeteners is now regulated by artificial sweeteners such as aspartame, saccharin, sucralose, and cyclamate. Stevia, on the other hand, is a natural sweetener and a niche product within the market for high-intensity sweeteners. Over the last few years, there has been a growing tendency to focus on naturally-derived sweeteners and food additives due to increasing consumer awareness of the ill effects of artificial additives on human health.

The major strategies followed by the market participants are Product Launches and Geographical Expansions. Based on the Analysis presented in the Cardinal matrix, PepsiCo, Inc. and The Coca Cola Company are the forerunners in the Stevia Market. Companies such as Tate & Lyle PLC, Ingredion, Incorporated, Archer Daniels Midland Company, S&W Seed Company, Evolva Holdings SA, and Sunwin Stevia International, Inc. are some of the key innovators in Stevia Market.

Scope of the Stevia Market Analysis

The global stevia market size is expected to reach $1.1 billion by 2026.

The major factors that are anticipated to drive the stevia industry include enhanced Marketing and Promotional Strategies and Growing demand for nutraceuticals & functional foods during coronavirus outbreak.

The Asia-Pacific region had the highest share in stevia market worldwide.