The Global Shipbuilding Market size is expected to reach $ 176.1 billion by 2027, rising at a market growth of 3.4% CAGR during the forecast period.

Shipbuilding is the process of constructing floating vessels such as ships. Usually, there is a separate area designed for this activity called a shipyard. Shipbuilders are known by the name of shipwrights. All the vessels presently floating in the oceans are designed and constructed by the shipbuilding sector. Major factors responsible for the growth of the shipbuilding market are seaborne trade, rising demand for cargo transportation, increasing agreements related to trade, advanced technologies adopted by the marine vessel engines, and automation facilities in marine vessels.

Various warships like submarines and amphibious assault ships are designed by the shipbuilding industry in order to protect the coastal boundaries of the countries. Submarines are designed in such a manner that enables them to travel and carry weapons under the water. Submarines are capable of attacking enemy ships. A submarine can stay underwater for around six months.

The main advantage of maritime transport is that it can ship all types of goods. It can carry heavy goods which aircrafts cannot carry. Various machines, automobiles, industrial parts are some goods transported with the help of maritime transport. Also, the other special warships such as command ships, mine countermeasure ships, oceanographic ships, surveillance ships, sea fighters, and amphibious assault ships are designed by the shipbuilding sector for serving the naval defense forces of the world. 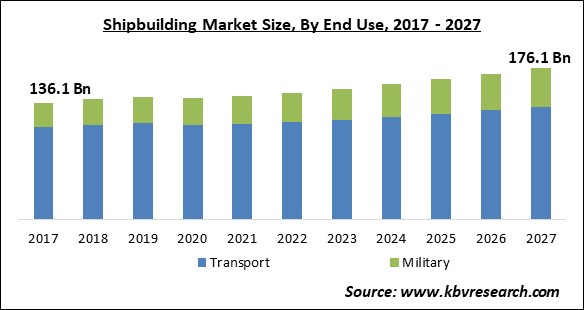 The widespread COVID-19 pandemic resulted in the downfall of the economies of various countries. Strict regulations over import and export and the imposition of lockdown to curb the effects of COVID-19 has hampered the supply chains of majorly all the sectors. The shipbuilding market has also witnessed huge loss due to this pandemic.

Moreover, the pandemic has also negatively affected the establishment of new shipyards, conversion, and repairs projects. This pandemic also has forced many companies in this sector to stop their operations due to less demand in the market. For example, due to this pandemic, Irving shipbuilding has issued a notice which resulted in the shutdown of Halifax shipyard for a few weeks.

The rising development of the latest technologies in the shipbuilding sector is likely to result in the growth of the shipbuilding market. The major issue of the shipping industry is the communication gap. The role of shipyards is to enhance the efficiency of the transportation sector by reducing the time taken for the delivery of goods over the seas. But they face many issues due to different time zones and not having control over necessary information due to lack of proper communication facilities.

The safety and security of the country is the major concern of the ruling government of all the countries due to which the government prefers to invest more in the defense sector in terms of money and manpower. Moreover, the coastal regions are the most sensitive areas of any country as it is difficult to judge the unexpected movement in the water and thus have more chances of attacks from the enemies and thus there is a need to have proper defense facilities in the coastal regions.

The governments, as well as the public, are concerned about continuous environmental changes taking place all over the globe. The major contributors to these increasing climate changes and global warming are the various activities performed by the industrial sector. The shipbuilding industry is one of the pollution-causing industries. Similar to all other modes of transportation, ships also release carbon dioxide due to the use of fossil fuels. 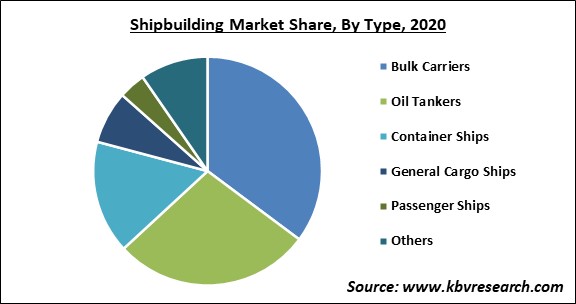 On the basis of type, the shipbuilding market is segmented into oil tankers, bulk carriers, general cargo ships, container ships and passenger ships. In 2020, the Bulk carrier segment dominated the shipbuilding market with the largest market share. Bulk carriers are the merchant ships mainly developed to transport bulk amounts of unpacked cargo, like coal, ore, cement, steel coils, grains. These ships can be abrasive as well as dense. These kinds of ships are designed to increase capacity, durability, and efficiency.

Based on end-use, the shipbuilding market is classified into transport and military. In 2020, the transport segment has dominated the shipbuilding market by acquiring the maximum revenue share. Ships are widely used for transportation of various commodities from large machines to even oil, and passengers also. This mode of transportation is widely being used since the last couple of years. Transportation through water is cheaper as compared to that of air, exempting the changing exchange rates and the currency adjustment factor which means the fee imposed on the carrier companies.

The major strategies followed by the market participants are Partnerships. Based on the Analysis presented in the Cardinal matrix; General Dynamics Corporation is the major forerunner in the Shipbuilding Market. Companies such as Huntington Ingalls Industries, Inc., Samsung Heavy Industries Co., Ltd., Damen Shipyards Group are some of the key innovators in the Market.

The Shipbuilding market size is projected to reach USD 176.1 billion by 2027.

Increasing investment in Naval defense are driving the market in coming years, however, harmful for environment limited the growth of the market.

The Asia Pacific market is the fastest growing region in the Global Shipbuilding Market by Region 2020, and would continue to be a dominant market till 2027.