The Global Satellite Internet Market size is expected to reach $10.5 billion by 2028, rising at a market growth of 21.9% CAGR during the forecast period.

Satellite internet is a wireless network that includes satellite dishes in orbit and on earth. It provides access to current information while connecting people in distant parts of the world. High-speed network connectivity supplied by orbiting satellites is used to access satellite internet. It differs from land-based broadband services like digital subscriber line (DSL) and cable and is quicker than standard internet service. 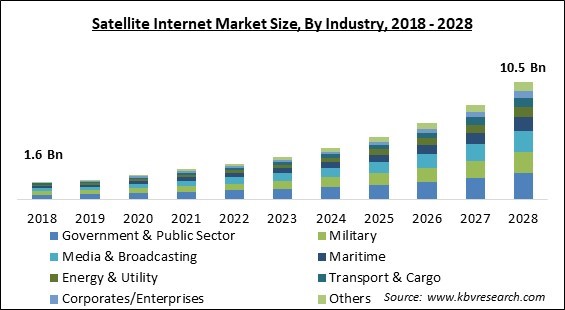 In addition, a land-based interface with audio, video, and information that is accessible from any location on the earth is provided by satellite communication. One of the essential benefits of satellite internet for businesses is the ability to send a link over inaccessible areas like oceans and mountains at speeds of many megabits per second. However, a private and secure connection may join several remote locations that are spread out over a large area.

Demand for satellite internet is increasing due to the lack of other broadband internet choices especially in rural areas. Additionally, satellite internet technology offers users tremendous bandwidth and speed. Emerging nations like India, Malaysia, and Vietnam are swiftly embracing these services, which furthers the market's expansion.

Additionally, several businesses, including SpaceX and Hughes Network, are releasing cutting-edge products, supporting the market expansion. For instance, Hughes Network Systems, LLC, a division of EchoStar Corporation, announced the introduction of HughesNet Fusion in a few US regions in September 2022. As a result, a satellite internet provider with low latency is HughesNet Fusion.

Additionally, many businesses collaborate with American wireless network operators to offer broadband access throughout the country. For example, SpaceX Starlink and T-Mobile announced a partnership in August 2022 to introduce coverage Above and Beyond, a new initiative to bring cell phone connection everywhere. To supply this service, the firms created a new network that will utilize the mid-band bandwidth of T-Cellular while being sent via Starlink satellites.

An extraordinary COVID-19 pandemic that hit the planet in recent years has had catastrophic results everywhere. This has badly impacted the manufacturing and supply networks of numerous industries worldwide. With the increased use of satellite internet for communication during this public health emergency by government and healthcare organizations, as well as the expanding demand for various voice, data, and media communications on a national and international level, COVID-19 had a positive impact on the market. Demand for wireless networking services increased dramatically during COVID-19, with some businesses reporting a 60% increase in internet usage from before the crisis.

Increase In Demand From Rural Areas For Satellite Internet

The industry is expanding due to increased government measures to expand the use of upgraded satellite internet services to create a digital nation and improve public safety and security. Additionally, several governments are investing in satellite broadband networks to provide broadband services to rural people in developing countries, contributing to the market's expansion. To give internet connections to the public and a secure communication route for the general public, governments are investing in various satellite broadband companies and conducting trials, which fuel the market's expansion.

Every networked device takes up room on the network. The amount of virtualized resources impacts how rapidly networks and devices can communicate. If more incredible speed is desired, more virtualized resources could be added. At the moment, virtualizing resources may result in a significant lag. Compared to wired internet, satellite internet is slower. As a result, it might not be capable of handling tasks like video work, online gaming, or VOIP (internet phone). High latency, or "ping factor," is to blame for this since the data that has been collected must travel through space.

Based on Frequency Band, the market is divided into L-band, C-band, K-band, and X-band. In 2021, the K-band market category dominated and contributed the highest revenue share. Radar broadcasting, security, and military systems increasingly use the K-band frequency. K-band monolithic microwave integrated circuit (MMIC) technology is an upcoming trend which makes it possible to use K-band power amplifiers and low-noise amplifiers. 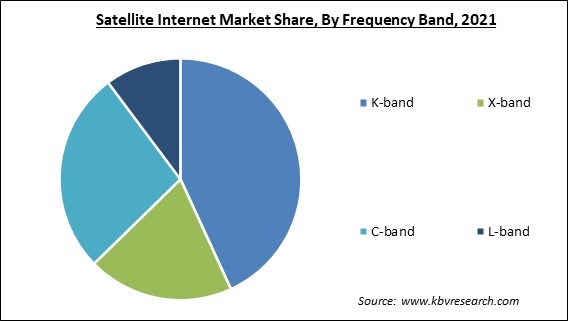 Based on the industry, the Satellite Internet Market is segmented into the Energy & Utility, Government & Public Sector, Transport & Cargo, Maritime, Military, Media & Broadcasting, Corporates/Enterprises, and Other industries. In 2021, the energy and utility sectors experienced tremendous growth. Satellite technology is valuable to utility businesses because it helps them operate more efficiently and with less environmental impact. Geographic information systems (GIS) have been used for years to precisely map and locate infrastructure. Satellites are another tool used by utilities for asset monitoring and remote imaging and sensing.

Based on geography, the Satellite Internet Market is divided into North America, Europe, Asia Pacific, and LAMEA. The largest revenue share was accounted for by North America, which also topped the global market. However, the market is expected to experience greater rivalry due to multiple competitors. This is due to the region's expanding adoption of cutting-edge technologies like cloud-based, IoT, and AI, as well as rising government initiatives to spread satellite technology across North America.

The global Satellite Internet Market size is expected to reach $10.5 billion by 2028.

Increase In Demand From Rural Areas For Satellite Internet are driving the market in coming years, however, Slower Speeds And Increased Latency restraints the growth of the market.

The Government & Public Sector segment acquired maximum revenue share in the Global Satellite Internet Market by Industry in 2021 thereby, achieving a market value of $2.4 billion by 2028.

The North America market dominated the Global Satellite Internet Market by Region in 2021, and would continue to be a dominant market till 2028; thereby, achieving a market value of $4 billion by 2028.