The Global Rapid Acting Insulin Market size is expected to reach $11.4 billion by 2027, rising at a market growth of 5.6% CAGR during the forecast period. Rapid-acting insulin is considered as one of the quickest acting insulin that shows the action of working just after the 15 minutes of its application. Insulin’s activation is expected to last for 5 hours. Humalog, Fiasp, NovoRapid, and Apidra are a few of the rapid-acting insulin present in the market.

A rapid-acting insulin is considered as an insulin analog created to mimic meal-induced insulin secretion. These analogs are generally more preferred as compared to the regular insulin due to their rapid response, enabling diabetes patients to consume it intravenously prior to any meal. Advancement in the rapid-acting insulin market is necessary for diabetes management. Though, clinical security and efficacy require the consideration of researchers and experts. 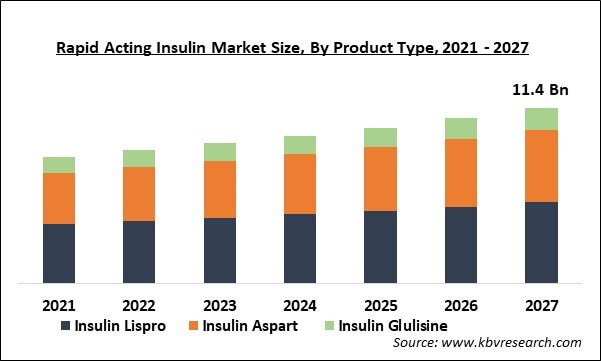 By performing rapid-acting insulin opportunity analysis assessment, higher availability of constant glucose tracking will assist in complex analysis of clinic rapid insulin action which was not earlier feasible. This will assist in knowing whether the latest rapid-acting insulin opportunity analysis will offer a superior degree of optimal glycemic control above HbA1c levels, which is needed for regulatory and scientific compliance.

Along with diabetes, people who have other heart diseases or other complications could maximize the possibility of getting severely ill from COVID-19 as suffering from any above condition makes it more difficult for patients to fight against the infection. This motivated leading companies to deploy unique strategies in order to get a competitive edge during the outbreak of the COVID-19 pandemic.

Based on Product Type, the market is segmented into Insulin Lispro, Insulin Aspart and Insulin Glulisine. On the basis of product type, the insulin lispro segment would exhibit a promising growth rate and procure the highest revenue share in the global rapid-acting insulin market during the forecast period. This is due to the superior benefits offered by the product such as rapid subcutaneous absorption, earlier & higher insulin peak, and short duration of action.

Based on Indication, the market is segmented into Type 2 Diabetes and Type 1 Diabetes. On the basis of indication, the type-2 diabetes segment garnered the maximum revenue share of the market, due to the surge in urbanization, unhealthy diet, and low level of physical activity which results in the increasing number of people with type-2 diabetes, thereby propelling the growth of the rapid-acting insulin market. 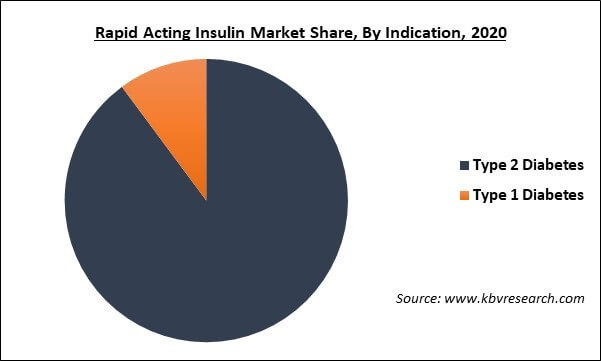 Based on Distribution Channel, the market is segmented into Hospital Pharmacies, Drug Stores & Retail Pharmacies and Online Providers. On the basis of distribution channel, the drug store & retail pharmacies segment procured the biggest revenue share of the market, due to the ubiquitous nature of drug store & retail pharmacy stores. Moreover, these pharmacies offer alternatives for insulin, if there is a non-availability of the prescribed ones.

Based on Regions, the market is segmented into North America, Europe, Asia Pacific, and Latin America, Middle East & Africa. North America appeared as the leading region in terms of revenue generation in the global rapid-acting insulin market in 2020 and would show a similar trend even during the forecast period. There is a growing case of diabetes and an increasing geriatric population, which is boosting the regional rapid-acting insulin market.

The major strategies followed by the market participants are Partnerships. Based on the Analysis presented in the Cardinal matrix; Sanofi S.A., Merck & Co., Inc., Novo Nordisk A/S, and Eli Lilly and Company are the forerunners in the Rapid Acting Insulin Market. Companies such as Adocia SA, MannKind Corporation are some of the key innovators in the market.

The global rapid acting insulin market size is expected to reach $11.4 billion by 2027.

Rising occurrences of diabetes are driving the market in coming years, however, stringent government approval and huge cost of insulin have limited the growth of the market.

The Insulin Lispro market dominated the Global Rapid Acting Insulin Market by Product Type in 2020, and would continue to be a dominant market till 2027.