The Global Prefilled Syringes Market size is expected to reach $11.9 billion by 2028, rising at a market growth of 10.5% CAGR during the forecast period.

A single-dose packet of vaccination attached with a needle on it is referred to as prefilled syringes. In addition, metal or glass syringes were once common, although there is a growing trend toward plastic & disposable syringes to keep the needle safe and prevent re-use (prefilled disposable systems). This has increased the demand for prefilled syringes over traditional glass vials for packing prescription medications in the healthcare industry. 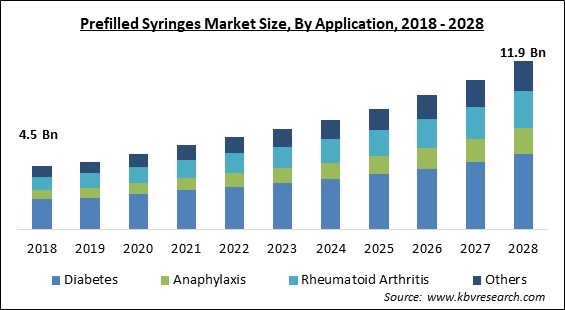 When a syringe is placed into a medicine vial to pull out a dose; it offers another possible admixture-related risk of contamination. The prefilled syringes lessen the danger of drug contamination. By removing this risk, pre-sterilized syringes improve safety and do not require additional on-site vial cleanliness and depyrogenation steps. The market for prefilled syringes is expanding as a result of factors including the expansion of home healthcare services, rising use of injectable medications, an increase in the prevalence of chronic diseases, and a surge in the advantages of prefilled syringes over traditional vials. In addition, prefilled syringe-related technology developments aid in the market's expansion.

Additionally, the development of biologics and biosimilars as well as the rise in demand for injectable medications in prefilled forms present profitable potential for market expansion. Prefilled Syringes guarantee the administration of a solution that is free of particles and can hold volumes which commonly vary from 0.25 to 5.0 ml. They are thus most appropriate for products injected subcutaneously or intramuscularly.

The outbreak of the COVID-19 has impacted numerous domains of the business world. Because of the reduced danger of needle-stick injuries, prefilled syringes are more in demand than glass ampoules or any other extra needles. Hence, the producers have boosted the prefilled syringe manufacturing capacity in order to boost the COVID-19 vaccine output. Due to the surge in demand for home health care services, market participants have expanded their investments in resources and raw materials. Health care providers have adopted telemedicine, that assists to lessen face-to-face interaction, in response to innovative and numerous ways of providing the necessary quantity of care.

Prefilled syringes are frequently utilized in the therapy of chronic illnesses that allow patients to self-administer medication, such as diabetes, heart problems, and autoimmune diseases. Due to this, the market for prefilled syringes is expanding as a result of the increasing incidence and occurrence of chronic or life conditions around the world. Considering the comfort and safety of using self-injection equipment, there is also a rising demand for it. Better use-controlled drugs like narcotics, lower injection costs by requiring less preparation as well as fever material, simple storage and disposal, eradication of vials overfill for products moved to syringes for direct diluents are motivating patients to opt for prefilled syringes for treatment.

The growth of the prefilled syringes market is anticipated to be driven by the rising demand for biological medications and expanding advances in injectable delivery systems. Top players have taken an interest in biological medications since they focus on disorders for which there are no or few effective treatments. For example, F. in April 2021 U.S.-based Hoffmann-La Roche Ltd. The prefilled syringe of omalizumab known as Xolair has received FDA approval for its additional biologics application.

Prefilled syringes improve patient safety by reducing the risk of accidental needle sticking and dangerous product exposure that may occur while drawing medication from vials. Prefilled syringes' contaminated needles have been linked to blood-borne illnesses like HIV and HCV in similar people. Additionally, due to their difficult and expensive production process, the market presence of half prefilled syringes with interlaced safety elements is a serious problem. 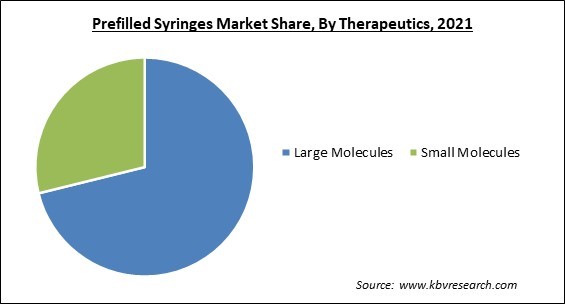 Region-wise, the prefilled syringes market is analyzed across North America, Europe, Asia Pacific and LAMEA. Europe emerged as the leading region in the prefilled syringes market with the maximum revenue share in 2021. This is due to the rise in the prevalence of chronic diseases, an upsurge in the demand for prefilled syringes, the accessibility of cutting-edge healthcare facilities with skilled medical personnel, a boost in the number of R&D activities combined with a significant existence of important players, and a rise in government investment in the medical system. 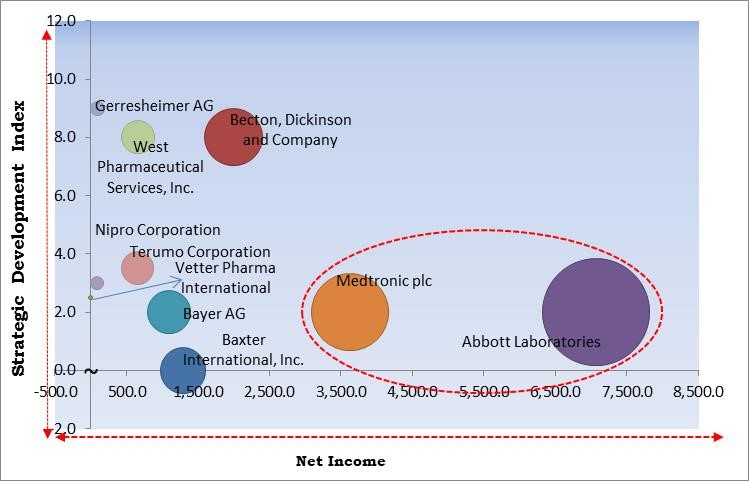 The major strategies followed by the market participants are Product Launches. Based on the Analysis presented in the Cardinal matrix; Abbott Laboratories and Medtronic plc are the forerunners in the Prefilled Syringes Market. Companies such as Becton, Dickinson and Company, Gerresheimer AG and West Pharmaceutical Services, Inc. are some of the key innovators in Prefilled Syringes Market.