The Global Portable Oxygen Kit Market size is expected to reach $29.6 billion by 2028, rising at a market growth of 7.0% CAGR during the forecast period. 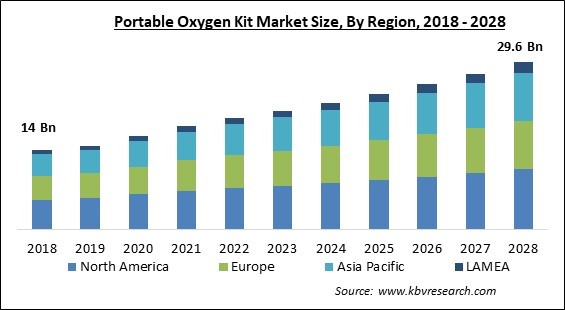 There are several sizes of portable oxygen kits. While larger cylinders retain more oxygen and last longer, smaller oxygen kits contain less oxygen and require more frequent refills. The size of a cylinder and its intended use depends on the patient's activity and the medication that the doctor has prescribed. Portable oxygen tanks are substantially lighter due to the lightweight components they are constructed of a more streamlined design. In the past, cylinders were made of steel, reinforced, and could contain up to 30 pounds. Portable variants, which frequently had wheels, could be tricky to move. Modern portable and lightweight oxygen tanks are made of aluminum.

In the latter half of the 1970s, medical oxygen machines were created. They were initially designed as a way to supply a constant flow of oxygen for the home without the use of bulky tanks or frequent deliveries. Portable versions were created by manufacturers starting in the 2000s. POCs now deliver between one to six liters per minute of oxygen according to the patient's breathing rate after dependability improvements since their first introduction. The most recent models of continuous flow (CF) units weighed between 10 and 20 pounds, while intermittent flow-only devices ranged in weight from 2.8 to 9.9 pounds.

The portable oxygen kit market is anticipated to increase positively as a result of the COVID-19 pandemic. People all over the world have been severely harmed by the coronavirus, mostly their respiratory systems. People now use home-based medical gadgets, like portable oxygen kits to control their health and shield themselves from infection. Additionally, due to a shortage of oxygen during the pandemic, a significant number of COVID-19 patients from low- and middle-income nations required oxygen. The market for portable oxygen has witnessed a huge increase in demand as a result.

Increasing burden of respiratory disorders throughout the world

One of the leading causes of mortality all over the world is respiratory disorders. As respiratory diseases are more common, portable oxygen concentrators have grown in popularity. The well-known respiratory condition chronic obstructive pulmonary disease (COPD) causes the airflow channels in the lungs to constrict, limiting the amount of oxygen given to the body's circulating blood. An oxygen concentrator is a piece of medical equipment that can save the lives of such patients because it is more portable and user-friendly than other oxygen devices available in similar circumstances. These are a few of the factors driving the market ahead.

Rapidly rising geriatric population all over the world

Through connected breathing tubes that are inserted in the nostrils or through a mask, the patient receives pressured oxygen from the tank. These types of oxygen tanks are frequently used in medical facilities, such as clinics, hospitals, and nursing homes, but they are also utilized by consumers for in-home as well as portable use. However, when handling or dropping portable oxygen tanks, there is a chance of explosions, which could result in serious and even fatal injuries. The oxygen cylinder may catch fire upon a specific level of impact, resulting in an internal flash fire and the aluminum tank bursting. Due to the magnitude of the explosion and debris from the exploding canisters, the owner and bystanders may suffer severe injuries or perhaps die. 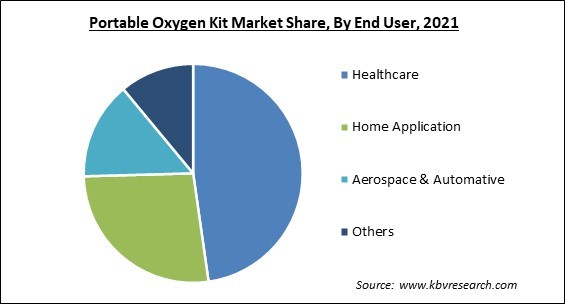 By End-User, the Portable Oxygen Kit Market is segregated into Healthcare, Home Applications, Aerospace and Automotive, and Others. In 2021, the aerospace and automotive segment garnered a significant revenue share of the portable oxygen kits market. The market is anticipated to develop as more portable oxygen kits are used in the aerospace and automotive industries. This is a result of the widespread use of these kits in disaster-prone areas, fast cars, and the battlefield to keep pilots and drivers breathing while they are operating their vehicles.