The Global Plenoptic Camera Market size is expected to reach $3.3 billion by 2028, rising at a market growth of 17.6% CAGR during the forecast period.

The plenoptic camera uses information about the light field emanating from a scene as well as the direction that the rays of light are going in space. It is a type of specialized light field camera that enables the image to be focused at any point after being captured. A basic plenoptic camera senses intensity, color, and direction using a network of microlenses that are positioned between the front lens and the camera sensor. 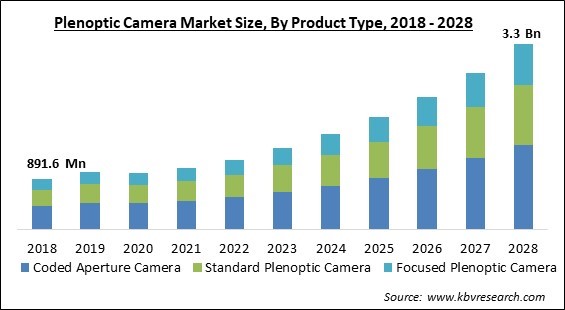 It records several collections of brief photos from various angles that can then be edited as needed. These cameras are often known as light field cameras. While the plenoptic cameras' picture data includes the amount of light present in the picture as well as in surroundings, traditional cameras just record light intensity. There are many varieties of plenoptic cameras.

One type senses intensity, color, and direction using an array of miniature lenses put in front of a standard image sensor. Another kind is the arrays of many cameras. Holograms are common to light field images which are film-based. A breakthrough in photography is the Standard Plenoptic Camera (SPC), which makes it possible to capture two-dimensional images from a single exposure that are focused at various depths.

Unlike traditional cameras, the SPC consists of a main lens and a microlens array that project virtual lenses into the space of objects. A light field is a 4D dataset with a lot of potentials. These were primarily developed to enhance robot vision in the future. Automated object recognition may also benefit significantly from its increased precision and detail. For the creation of a plenoptic camera image, a sensor has a 2D pixel matrix that is made to move about in 3D space and capture the light field.

A 4D image is developed from this equation by eliminating the motion of the camera, as it is in the same direction as the motion of light rays. A 4D light field, therefore, has two more dimensions over traditional 2D images as a result of spatial displacement and represents the depth of the scene witnessed. They provide access to new data and allow for the inference of various data products. The industrial use of the light field typically makes use of 3D depth images or 2D images that are focused on a specific distance (point clouds).

The COVID-19 pandemic temporarily halted fieldwork on a number of significant projects. Tourism decreased, which in turn has decreased demand for plenoptic cameras. New projects have been put on hold all across the world, which has had an impact on demand across a number of industries, including manufacturing, industrial, and retail. Although raw material procurement had little of an impact on market participants, time and transportation costs were still significant issues. Key market participants have concentrated on setting up their businesses for a robust recovery after the pandemic.

A rise in features for digital cameras and smartphones suggests a rise in demand for high-quality camera modules. Media uses plenoptic cameras to produce high-quality photos and films. Additionally, digital images that may be refocused to focus on different subjects after being taken are made possible by plenoptic technology. Users may see their photos before they are taken, which helps them decide on the composition and other aspects of photo taking more effectively.

Through the lens and recorder setup of traditional photography, light is captured as it reflects off the subjects in the frame. This method does not capture the information on each individual light ray that makes up the image. Instead, it aggregates the data from all the light rays that hit each location in an image. This drawback is limited to scopes in which a traditional camera could be used. The adoption of better technologies in digital cameras, like plenoptic technology, has started to increase the area where these can be used.

Costlier In Production And In Purchase

The first requirement for a plenoptic camera is high manufacturing cost, which has an impact on installation and startup costs. Additionally, the initial capital cost expense foundation is greater for plenoptic cameras than for conventional technologies, restricting the possibility of incurring extra costs. An essential component of a plenoptic camera is the installation of multiple lenses in a variety of sizes. The micro-lens array is positioned between the camera sensor and the primary lens (at, before, or after the focal plane). 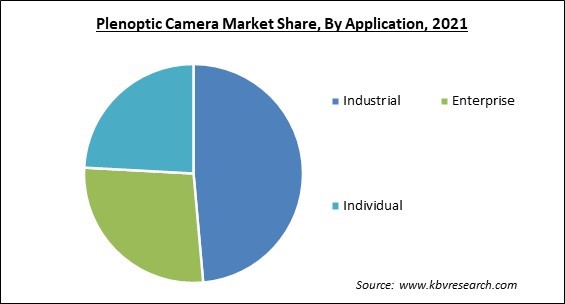 On the basis of application, the plenoptic camera market is divided into individual, enterprise, and industrial. The enterprise segment procured a substantial revenue share in the plenoptic camera market in 2021. Within enterprises, plenoptic camera technology is primarily used in surveillance and security. By keeping a video log of every visitor to the premises and monitoring them, video surveillance indirectly protects employees. The level of security can be greatly increased by installing security cameras to guard the premises against burglary, theft, infiltration, fire, and other hazards.