The Global Ornamental Fish Market size is expected to reach $8.6 billion by 2028, rising at a market growth of 8.0% CAGR during the forecast period.

Aquarium keeping is one of the most popular hobbies in the world, with millions of fans. The European Union as a whole is the world's largest market for ornamental fish, but the United States (US) is the leading producer of ornamental fish. Although exact numbers on the decorative fish industry's worth and commerce are unavailable, the value of ornamental fish and invertebrates imported into various countries globally is estimated to be over $278 million US dollars. According to pet industry surveys, the aquarium market is valued at about 1,000 million dollars. Although most aquarium fish come from freshwater, the popularity of marine decorative fish has soared, due to children's films featuring captivating colorful fish and other species. The hobby has been made much easier by recent developments in fish management and aquarium equipment technology.

Establishing marine reef mini-ecosystems within the aquarium is a popular and quickly growing trend in the hobby. Reef tanks are saltwater aquariums that focus mostly on invertebrates and have a low fish population. Live rock, hard and soft corals, invertebrates like crustaceans and mollusks, and, of course, an unlimited array of colorful fish make up a standard reef tank. As a result, the market value of many marine species used in the ornamental trade has soared dramatically.

The variety of animal species found in the general 'ornamental aquarium fish trade' is astonishing. The ornamental fish trade involves some 2,000 species and millions of specimens each year. Freshwater and saltwater species account for nearly equal numbers of species. However, the vast majorities of individuals in the trade, 90-96 percent, is from freshwater and are generated in commercial aquaculture facilities.

The quarantine imposed in response to the COVID-19 pandemic has had a knock-on effect on facilities that house captive species. In addition, the World Trade Organization estimates that the disruption of economic activity caused by the COVID-19 pandemic would cause a drop-in trade of between 13% and 32% by 2020. Since the maritime industry handles over 80% of trade (in terms of total volume), a drop-in human-based marine activity is likely. Furthermore, one of the biggest issues the sector would confront in 2020 is the closure of non-essential enterprises.

The benefits of caring for fish might help relax in addition to lowering stress. The sound of water running in one of the sensations of the environment that most people find relaxing. Other sorts of music, such as the sounds of ocean waves, rainstorms, and river noises, can help the mind rest. Some individuals prefer fishing in the river because of the characteristics of this water sound. They can appreciate the melodies and naturally beautiful around them rather than catching fish. Those who care for fish in aquariums, on the other hand, may be more thrilled to offer a relaxing impact to the home. Because viewing the fish swim decreases stress and anxiety when the aquarium has been decorated with rocks and plants.

Aeromonas, Pseudomonas, Staphylococcus, and other bacteria were detected in the fish, and several of them can infect both fish and people. Antibiotic resistance has been an increasing issue for years, according to Miller-Morgan. Antibiotics can lose some or all of their potency due to the nature of the resistance. He added there have been documented incidences of disease transmission from fish to humans, but it is rare. Anyone with a weakened or compromised immune system should be especially concerned, he said, and anyone with such health conditions should talk to their doctor about tropical fish management. 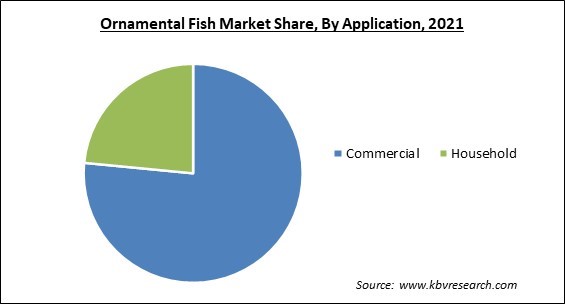 Based on Application, the market is segmented into Commercial and Household. The commercial segment procured the largest revenue share in the ornamental fish market in 2021. Due to the expansion of ornamental marine livestock aquaculture, especially in the Caribbean, North America, and Southeast Asia, Professional aquariums and reef tanks are used in zoos and oceanariums to display marine creatures and plants, notably oceanic or migratory fishes and mammals. Zoos and oceanariums display decorative fish and reefs to the public and are utilized for scientific research into marine ecology. Aquariums designed for this purpose are highly specialized to mimic the natural habitat of the species that live in them, improving the overall habitat for ornamental fishes.

Based on Product, the market is segmented into Tropical Freshwater, Temperate, and Marine. The marine fish segment registered a substantial revenue share in the ornamental fish market in 2021. Marine species demand specific care, and they also have a pleasing appearance. The three types of marine aquariums are reef aquariums, fish-only aquariums, and fish-only aquariums with live rock. Triggerfish, Groupers, Scorpions/Lions, Puffers, Snappers, Squirrels, Hawks, and Tangs, on the other hand, are aggressive and large marine species that can be housed in fish-only tanks. These varieties of fish can be kept in chemical and mechanical filtration aquariums.

Based on Regions, the market is segmented into North America, Europe, Asia Pacific, and Latin America, Middle East & Africa. The Asia Pacific segment witnessed a promising revenue share in the ornamental fish market in 2021. In 2019, the Asia Pacific, led by China, Japan, and India, became one of the most important ornamental fish markets in the world. The expansion of the regional market could explain the rising demand for quality and exotic ornamental fishes. The popularity of fish in Japanese art has increased demand for a wide range of uncommon fish species. Over 30,000 live fish made a moving psychedelic artwork during Hidetomo Kimura's Art Aquarium Museum 2020 exhibition in Tokyo, for example. As part of the live art exhibition, over 30,000 live fish are on display in water tanks and aquariums of all shapes and sizes.