The North America Hip Replacement Implants Market would witness market growth of 4.4% CAGR during the forecast period (2019-2025). The North America Cochlear Implants market is studied across the U.S., Canada, and Mexico. A 2018 fact published by the World Health Organization claims that the number of individuals aged 60 years or older could rise from 900 million to 2 billion between 2015 and 2050.

The aging of the population happens faster than it has ever been. For example, while France had to adjust to the changes in the population over 60 years of age from 10 to 20 percent, areas would have to realign for the same timespan slightly over 20 years. The hip joint can be damaged by various conditions and lead to lasting hip pain. The overall rate of aseptic loosening has been less than that experienced in younger patients when they were over eighty years of age, but recurrent fractures, periprosthetic fractures, and diseases were more common in this age group. Femoral stem cementation showed better long-term results than cement-less attachment which indicated that it could provide better initial fixation, and thus longer service life.

For instance, in September 2017, Stryker (US) taken over NOVADAQ for expanding its instruments portfolio which delivers enhanced visualizations in reconstructive procedures. 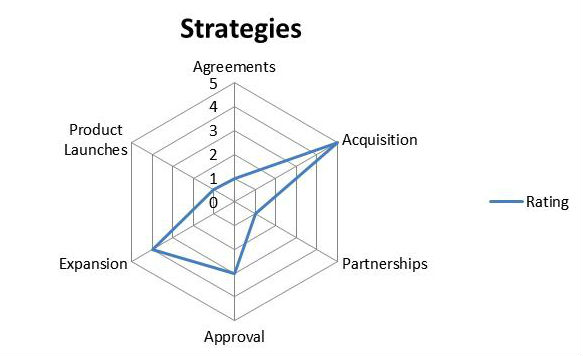 MicroPort launched Procotyl® Prime Acetabular Cup System in August 2017 for the patients in the US. It is used in surgery of total hip replacement. The company also signed an agreement with Wiltrom Medical for developing fixation products.

The market is expected to grow at a rapid pace with the prevalence of affordable healthcare facilities in advanced economies and technological advancements in minimally-invasive surgeries. The development of non-metallic materials, like polymer and ceramic, will aid resolve conventional instrument-related problems like increased blood metal ions in the patient's bloodstream and a long time implant deterioration. The newer procedures have reduced hospital stay to less than 4 days after completing hip replacement surgery.

Moreover, over the prediction period, an increasing percentage of older people with degenerative diseases is expected to have a positive effect on market growth. The success rate of minimally-invasive surges, which is expected to provide lucrative growth leads to this industry, has been boosted by an increasing number of robot-assisted surgeries.

Favorable policy for reimbursements continues to stimulate the overall growth. The Patient Protection and Affordable Care Act (PPACA), which provides access to a higher degree of patients, has led to an increasing level of insurance coverage of orthopedic tools. Both the public (for instance CMS) and private payers have provided adequate prosthetics and orthotics coverage in recent years.

For example in November 2018, the "India Centric" reimbursement program was launched by Johnson & Johnson to provide full reimbursement for patients under revision surgery within 15 years of the primary hip replacement operation. Conformis, Inc., a medical technology firm, started working with JFK Medical Center in Florida on the first 3D total hip replacements operations in August 2018.

Based on products, the hip replacement implants market has been categorized into the partial femoral head, total hip implants, hip resurfacing, and revision hip. As a result of the increasing demand for minimally invasive operations and continuous technological advancements, total hip implants had the largest business value in 2018. Another significant cause for the market is the growing incidence of osteoarthritis. In the UK, 90% of the overall hip replacement in 2016, was reported for osteoarthritis by the national joint registry for England.