The Global Near-Eye Display Market size is expected to reach $6.7 billion by 2028, rising at a market growth of 25% CAGR during the forecast period.

Near-eye displays are a type of head-mounted display that immerses the user in a virtual environment (VR) or augments the real world (AR) by superimposing digital information or anything in between on the 'cross/extended reality' spectrum (XR). In addition, near-eye displays response to head movement and allow manipulation and interaction with objects. Along with that, near-eye displays, which have recently inundated the market, have the ability to generate innovative experiences that could transform industries such as healthcare, communication, entertainment, and manufacturing, among others.

Since its development in the last century, a near-eye display, also known as a head-mounted display, has been a critical method for providing humans with virtual pictures. In particular, an ultra-wide field of view (FOV), obvious depth cues, and a compact form factor with acceptable weight are required for the ultimate implementation of the commercial near-eye display. Freeform surface elements may be an effective technique to achieve not just a large field of view but also a better and lighter image, but their weight and volume make them unwearable. Implementing reflective mirrors into the system, substituting the spherical lens category with a wedge-shaped freeform prism, and using gradient index lenses are all possible options.

The growing and evolving culture of gaming among millennials and gen Z are contributing to the increasing popularity of VR and AR technology, especially in gaming products and events. In addition, various gaming events are using products using near-eye display technology in order to provide a better experience to the audience and participants. Along with that, the rise in the usage of VR and AR technology in the entertainment industry for creating different content would further accelerate the demand and growth of the near-eye display market in the coming years. 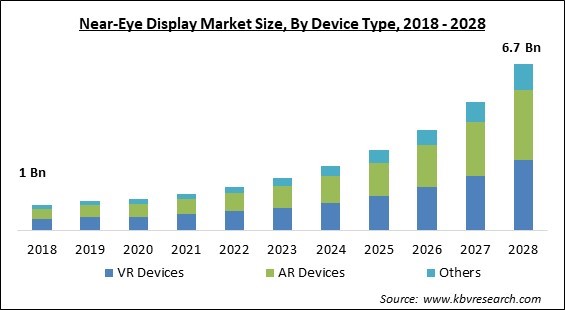 COVID-19, a fatal respiratory virus that originated in China, has infected millions of people around the world. The influence of COVID-19 on the near-eye display market and customer demand in the current context is unknown. On the other hand, because China is home to the bulk of microdisplay makers, device production is projected to decline in the near future. Also, many microdisplay-related research and development activities, as well as new product releases, were postponed and component supply was affected as a result of the COVID-19 outbreak. In addition, the temporary ban on imports or exports by various governments as well as the shutdown of manufacturing units has significantly impacted the supply chain of near-eye displays.

With the developments in technologies and the introduction of various advanced components, the demand for better performance products would increase. In this case, due to enhanced qualities such as greater contrast, faster response time, lower weight, negligible image blurring, more compact size, and a wider operational temperature range than LCDs, OLEDoS microdisplays are gaining traction in the market among key players. Because they are widely employed in EVFs and HMDs, they have outperformed traditional LCD and LCoS microdisplay technologies.

Rising investments by companies in the development of advanced products

Technology behemoths are concentrating their efforts on cooperating and partnering with businesses that generate and deliver value to their clients. Meta, Apple, Microsoft Corporation, and the Samsung Group are all investing extensively in the development of cutting-edge near-eye display modules, which provide effective and efficient performance. In addition, several research institutes are investigating AR technology for a variety of goods and applications. Along with that, the increasing R&D activities by the companies and manufacturers are contributing to the rise in the number of near-year display products in the market.

Increase in demand for electric and semi-autonomous vehicles

Based on Device Type, the market is segmented into VR Devices, AR Devices, and Others. AR devices segment recorded a substantial revenue share in the near-eye display market in 2021. It is due to the increasing popularity of AR across different industrial verticals. In addition, wearable glasses, head-mounted devices, and smartphone apps are the most common ways to enjoy augmented reality, which is contributing to the growth of the segment over the forecast period.

Based on Vertical, the market is segmented into Consumer, Automotive, Aerospace & Defense, Medical, and Others. The medical segment procured a substantial revenue share in the near-eye display market in 2021. It is because of the continued improvements in the healthcare sector. VR diagnosis, VR surgery, and AR for visualization and training help are examples of technological developments. In addition, the near-eye display market is likely to rise in response to current advances in the AR and VR markets.

Based on Technology, the market is segmented into TFT LCD, AMOLED, LCoS, OLEDOS, MicroLED, and DLP & Laser Beam Scanning. OLEDOS segment procured a significant revenue share in the near-eye display market in 2021. Near-eye displays based on OLED technology are made on a silicon surface known as silicon-based OLED or OLEDoS. Instead of using a TFT line, OLEDoS technology uses a semiconductor CMOS silicon driving circuit. As a result, the technology has greater resolution and dimension parameters than existing near-eye display technologies. In addition, market participants have begun to employ organic growth tactics in order to expand their portfolio of OLEDoS-based near-eye display solutions. SeeYA Technology, for example, began producing OLEDoS displays for smart wearables in 2020.

Based on Regions, the market is segmented into North America, Europe, Asia Pacific, and Latin America, Middle East & Africa. Asia Pacific garnered a significant revenue share in the near-eye display market in 2021. Due to the significant adoption of AR and VR technologies by the consumer and medical sectors in countries like China, Japan, and India, the near-eye display market in Asia Pacific would grow in the upcoming years. China's market growth can be ascribed to the fact that it is one of the major consumer electronics marketplaces. The widespread availability of lightweight, low-cost near-eye display-based HMDs in Asia Pacific will encourage more enterprises in the region to invest in AR and VR HMDs.