The Global Maize Flour Market size is expected to reach $44.6 billion by 2028, rising at a market growth of 4.9% CAGR during the forecast period.

The flour derived from corn (maize) grain is referred to as corn starch, maize starch, or corn flour (British English). The starch is located in the endosperm of the kernel. A common dietary ingredient, maize starch is used to manufacture maize syrup and other sugars, as well as to thicken sauces and soups. Maize starch is adaptable, simple to modify, and has a wide range of industrial applications, including the production of textiles, paper goods, adhesives, and anti-sticking agents. 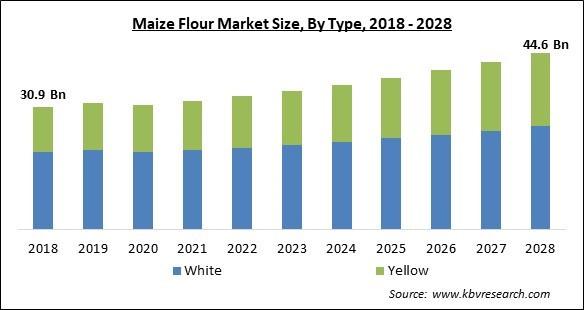 Maize starch can transform into a non-Newtonian fluid when combined with a fluid. As an illustration, adding water causes maize starch to change into oobleck while adding oil causes it to change into an electrorheological (ER) fluid. Maize starch was largely utilized for starching clothes and other commercial uses up to 1851. John Polson of Brown & Polson filed a patent for a process to extract pure culinary starch from maize.

This product was marketed as "Patented Maize Flour." Brown & Polson, muslin manufacturers who later grew to be the UK's top starch suppliers, had been providing laundry starch for the Paisley shawl business. Maize starch is typically combined with a lower-temperature liquid to make a paste or slurry before being employed as a thickening ingredient in liquid-based meals (such as soup, sauces, gravies, and custard).

In some cases, it is superior to flour alone since it produces a translucent combination as opposed to an opaque one. The molecular chains of the starch unwind as it is heated above 203 °F (95 °C), enabling them to contact other starch chains to form a mesh and thicken the liquid (Starch gelatinization). However, as the liquid continues to boil, its consistency thins, and its molecules disintegrate.

The COVID-19 pandemic has significantly impacted the demand and supply chain of various products. As a result of increased workplace safety measures, staff Coronavirus testing, and higher absentee rates from sicknesses, quarantines, and childcare, businesses are experiencing a surge in expenses by people. Maize flour producers must contend with these challenges in addition to increased expenses for agricultural raw ingredients and packaging supplies. The rising practice of individuals excluding themselves from social situations or isolating themselves after testing positive affects this circumstance. Because of this, restaurants deal with problems including declining customer traffic and a labor and food shortage. With the lift of the lockdown, social media adoption would increase maize flour market growth.

Because maize contains so many vitamins and minerals, it is a nutritious food option. One serving of cornmeal has 142 mg of potassium, 147 mg of phosphorus, and 77.5 mg of magnesium, which correspond to 4%, 12%, and 20% of the daily value, respectively, according to the USDA's nutritional analysis. Additionally, one cup of it has 4.2 milligrams of iron in it. This is 23% of the 18 milligrams per day for women and more than half of the 8 milligrams per day advised for men.

Consumer preference has caused a dramatic increase in businesses offering a balanced breakfast strategy composed of ready-to-eat items. To reduce cholesterol and control blood sugar levels, there has also been a shift toward healthier meals. The demand for maize has increased as a result of these. Maize is also used as a food coating by people in their restaurants and at home. Maize is being included in the menus of an increasing number of fast food restaurants.

Health Problems Linked With The Consumption Of The Maize Flour

Diabetes patients should avoid it due to its high sugar and carbohydrate content Consumption of the product is constrained by maize's high carbohydrate content. Maize has a large amount of sugar and is tough to digest. Maize boosts blood sugar levels, hence diabetics are advised to refrain from eating it. The glycemic index of maize, which is used to make products, is fairly medium. However, these health hazards are only posed by its ingestion. Additionally, this has had some infamous labels, such as "diabetes cause," affixed to it.

Based on the Type, the Maize Flour Market is segmented into White and Yellow. The white segment acquired the highest revenue share in the maize flour market in 2021. It is because white maize, a cereal grain, is used to make flour (sometimes known as corn meal), which is relatively similar to corn flour. Around 10,000 years ago, people in Mexico utilized it for the first time. It has a delicate texture and is white. The color difference between white maize flour and yellow maize flour, also known as corn meal flour, is the biggest and most obvious distinction. 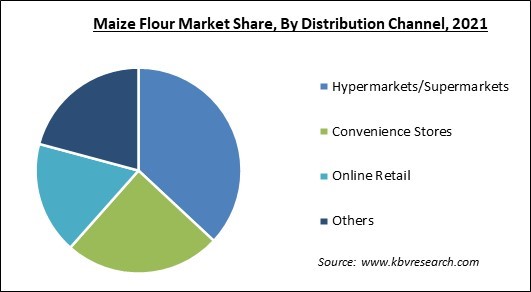 On the basis of End Users, the Maize Flour Market is divided into Commercial and Household. The household segment recorded a substantial revenue share in the maize flour market in 2021. Many families have started creating dishes as a result of the COVID-19 Impact. In the home or by a small-scale processor, nixtamalized maize is primarily utilized to create finished mesa products that are ready to eat but have a short shelf life.

By distribution channel, the Maize Flour Market is classified into Online Retail, Supermarkets/Hypermarkets, Convenience Stores, and Others. The supermarket/hypermarket segment garnered the highest revenue share in the maize flour market in 2021. A retail establishment known as a hypermarket combines a shopping Centre and a supermarket for groceries. Hypermarkets, which are frequently quite large businesses, sell a wide range of goods such as appliances, apparel, and groceries. Hypermarkets offer shoppers a one-stop shopping experience.

Region-wise, the Maize Flour Market is analyzed across North America, Europe, Asia Pacific, and LAMEA. The North America segment acquired the largest revenue share in the maize flour market in 2021. One of the main factors influencing the increase in demand in the region is the use of the product item in the production of tortilla chips and other bakery & snack goods. Additionally, it contains a high degree of maize starch, which is quite helpful when making processed foods with a favored maize flavor, such as extruded snack goods.