The Global Luxury Footwear Market size is expected to reach $46.8 billion by 2026, rising at a market growth of 11.8% CAGR during the forecast period. Luxury footwear is a category of luxury goods. It is referred to the footwear products that are usually accompanied by wealthy or rich people. The demand for these luxurious goods rises proportionally less than income and are taken by consumers in order to support self-worth and prestige or for the class and the craftsmanship of the product. Luxury footwear products generally have characteristics that include price, rarity, aesthetics, quality, extraordinariness, and symbolism. Luxury Footwear comprises athletic footwear, leather footwear, and sneakers as well as sandals, textile footwear, and other shoes.

The market is compelled by a growing number of millionaires all across the globe, particularly among the millennial segment. As per the report by CNBC LLC, 2019, there were around 618,000 millennial millionaires, out of which about 93% of millennials have a net wealth between USD 1 million to USD 2.5 million in the U.S. The demand for luxury footwear has been increasing among the millennials. This footwear is categorized by improved qualities, like material, uniqueness, durability, and comfort, which is a conspicuous factor driving the market. The growing inclination for attractive luxury footwear as a representation of status and the fondness of consumers for flaunting various international brands, like Gucci, Chanel, Louis Vuitton, Burberry, and Prada, are boosting the product demand. 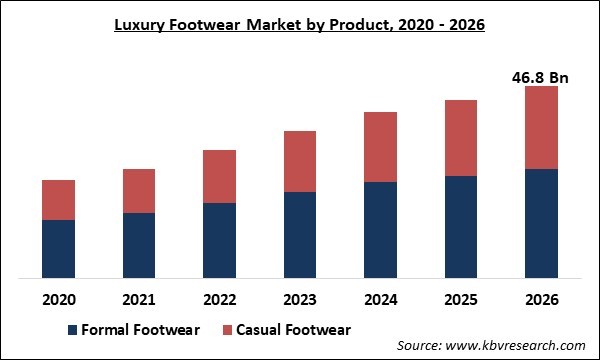 Based on Product, the market is segmented into Formal Footwear and Casual Footwear. The casual shoe segment is expected to be one of the fastest-growing segments from the year 2020 to 2026. Ever-changing trends from conventional to luxury footwear amongst people is playing a vital role in increasing customer reach. Casual luxury footwear bids an attractive look, unique design, elegance, and flexibility to be worn on many occasions, such as parties, concerts, and other public gatherings, which is among the key factors driving the segment.

Based on End User, the market is segmented into Women, Men and Children. The women segment dominated the market and has good global revenue in the year 2019. Growing spending on designer and trademarked luxury footwear by the working-class and millennials population has boosted the growth of the market all across the world. The women segment is anticipated to maintain its top position over the foreseeable period due to a rise in the number of women in the personnel.

Based on Distribution Channel, the market is segmented into Online and Offline. Offline distribution channels led the market and have a significant share of the global revenue in the year 2019. Brick and mortar stores counting independent luxury footwear stores and boutique shops are popular among consumers. These stores are rapid to adapt to the fashion styles in the luxury products market and be disposed to offer special deals to their customers, thus boosting the sale growth. Multi-brand luxury footwear stores are amongst other prevalent distribution channels.

Based on Regions, the market is segmented into North America, Europe, Asia Pacific, and Latin America, Middle East & Africa. Europe led the market for luxury footwear and have the largest share of the global revenue in the year 2019. The existence of a large number of rich and wealthy individuals with high disposable earnings in this region and this has been one of the key factors driving the regional market. North America is anticipated to arise as the second-largest regional market for luxury footwear in the coming years.

The major strategies followed by the market participants are Product Launches and Partnerships. Based on the Analysis presented in the Cardinal matrix; Adidas AG and LVMH SE is the major forerunner in the Luxury Footwear Market. Companies such as Salvatore Ferragamo S.p.A., Prada S.p.A., Airwair International Ltd., Sitoy Group Holdings Ltd., and Chanel S.A. are some of the key innovators in the market.

The luxury footwear market size is projected to reach USD 46.8 billion by 2026.

The major factors that are anticipated to drive the luxury footwear industry include growing demand for personal luxury goods among the millennial population.

The Formal shoe luxury footwear dominated the market and have the highest revenue share of the global market in the year 2019.

The Europe market dominated the global luxury footwear market by Region 2019, growing at a CAGR of 11.6 % during the forecast period.