The Global Leavening Agents Market size is expected to reach $7.4 billion by 2028, rising at a market growth of 4.0% CAGR during the forecast period.

One of the most significant ingredients used in baking, which holds a greater value, is leavening agent. A leavening agent is a material that causes the release of gases in a mixture, resulting in baked goods with an absorbent structure. Baking soda, active dry yeast, baking powder, sourdough starter, handmade potash, potassium bicarbonate, and bakers' ammonia are all examples of leavening agents. 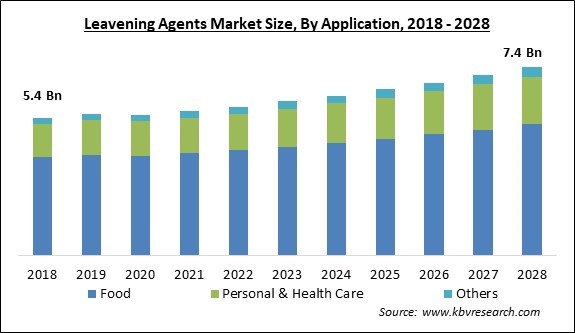 The COVID-19 pandemic has had an impact on the market in several countries. The supply chain was disrupted as a result of the lockdown. Several enterprises and sectors were closed, negatively impacting the market. This pandemic has affected logistical providers as well as farmworkers. All leavening stores were closed due to the nationwide shutdown. It had a negative impact on leavening agent sales. Bakery products, which were once considered one of the most in-demand items in the food service industry, have seen a drop in demand around the world.

Growing popularity for leavening acids in food and beverages

Increasing use of bakery and confectionery items

Widespread modernity, sweeping migration (particularly in emerging countries), the development of chronic illnesses due to bad dietary habits, and people's shifting tastes and preferences are the key causes ensuring the leavening agents market's growing demand. In 2020, the urban population surpassed a significant amount of people (more than a decent share of the total population). People's living conditions have improved as a result of increased migration to urban regions, where people have better access to resources than in rural areas. People have turned to RTE and other processing foods that include leavening agents such as baking soda and baking powder because of time restrictions and the never-ending fierce competition among the market players.

Increasing alternatives of leavening agents to hinder the market growth

The market is witnessing that substitutes such as lemon juice and egg alternatives become more widely available. Some of the leavening agent substitutes include buttermilk, plain yogurt, vinegar, cream of tartar, whipped egg whites, molasses, sour milk, club soda, and self-rising flour. The majority of the aforementioned alternatives are chosen based on the leavening agent’s basic characteristic. Molasses, for example, is widely used in sweets and other sweet baked and confectionery products due to its sugary flavor. Creaming is also becoming a popular mechanical leavening method, which could slow the market for leavening agents. 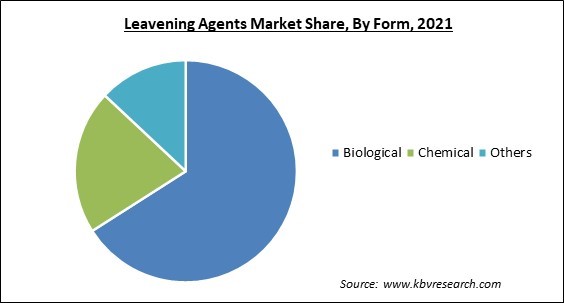 Based on Application, the market is segmented into Food, Personal & Health Care, and Others. The personal & health care segment garnered a significant revenue share in the leavening agents market in 2021. Factors supporting segment growth include increasing disposable incomes, rising demand for personal & health care products, and adaptability to healthier lifestyles. With rising awareness of health-related issues among the youth and other age groups, the popularity of products made up of leavening agents is increasing gradually.

Based on Form, the market is segmented into Biological, Chemical, and Others. The biological segment witnessed the maximum revenue share in the leavening agents market in 2021. It aids in the fermentation of sugar into carbon dioxide. Yeast is the most extensively utilized biological agent. The primary drivers fueling the biological form growth are changes in consumer food habits and rising demand for bakery items among the population.

Based on Regions, the market is segmented into North America, Europe, Asia Pacific, and Latin America, Middle East & Africa. The Europe emerged as the leading region in the leavening agents market with the largest revenue share in 2021. In addition, the regional market is observing the growing purchasing power of customers in the region for leavening agent products. For instance, according to a poll conducted by the International Baking Industry Exposition, Europe has the highest consumption of bakery products. Bakery consumption in Europe recorded multiple billion dollars in 2016. As a result, the demand for leavening agents is expanding in this region and is expected to grow in the coming years.