The Global Insulin Syringes Market size is expected to reach $2.1 billion by 2027, rising at a market growth of 4.5% CAGR during the forecast period.

Insulin controls the body's fat and glucose metabolism. It is a peptide hormone that is released by beta cells in the islets of Langerhans in the pancreas and aids in glucose metabolism regulation. An insulin syringe helps diabetic individuals get their insulin in the right dosages. Insulin syringes are made up of three parts: a needle, a barrel, and a plunger, and come in a variety of sizes. The needle is generally tiny and short, and it's coated with a specific substance like silicone to let it to slip into the skin with minimum discomfort.

The chamber in which the insulin is stored is known as the barrel. It's labelled with calibrations that show how many units of insulin are being administered. The plunger is a long, thin rod that glides up and down the barrel's length. Its function is to either pull insulin into the barrel or to release insulin from the barrel via the needle. Moreover, the capacity of the insulin syringe is determined by the intended insulin dosage to be given to the diabetic patient.

Companies may now offer their items online as a result of increased digitization. Insulin syringes are being sold online by a growing number of firms. Diabetes affects people in both urban and rural places across the world, with 64 percent of cases occurring in cities and 36% in rural areas.

Consumers from emerging countries account for the majority of the market. The rise in diabetes cases is a big motivator for the producers. Companies may take advantage of these distinct market characteristics by establishing a strong retail distribution infrastructure. Diabetes is predicted to cost USD 286 billion in direct healthcare expenditures per year for adults aged 20 to 79 over the world. 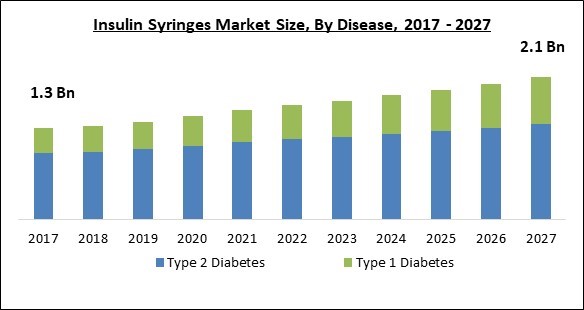 The World Health Organization (WHO) designated the COVID-19 pandemic a public health emergency of worldwide significance on January 30, 2020. COVID-19 has impacted over 210 nations throughout the world. Governments throughout the world have issued country-wide lockdowns and social distancing measures in response to the COVID-19 epidemic, in order to prevent the healthcare system from collapsing. Medical treatments and elective operations were also subjected to restrictions and bans by governments. These limitations continue to hinder the growth of many businesses, and the outbreak's immediate impact differs by industry.

Diabetes patients have a higher death rate than the overall population, according to research. People with diabetes require constant insulin (given through syringes or pens) and medical attention. The lack of or irregular supply of insulin devices as a result of the pandemic can have a major impact on the health of those with diabetes, particularly those afflicted with type 1 diabetes, who are completely reliant on insulin.

The introduction of generic insulin and the rapidly expanding demand for innovative insulin in the regulation of blood sugar levels across both type 1 and type 2 diabetes are expected to drive the growth of the insulin sector in the market during the projected period. Lispro, a generic version of rapid-acting Humalog insulin, was announced in March 2019 by Eli Lilly and Company. It will be accessible at much more affordable prices for diabetic patients.

Reduce the dependency on medical professionals

Insulin is often used by diabetic people since it is essential to be taken on a daily basis based on the type of diabetes. As a result, going to the doctor every day to get insulin injections can be costly and time consuming. People must carve out time from their busy schedules. People are searching for easier choices as their schedules get more hectic, therefore they utilise insulin syringes. When insulin syringes were utilised, patients reported a better overall injection experience. The size of insulin syringes varies depending on the amount of insulin used.

Lower-income nations are facing an unsustainable financial burden as the global market shifts away from human insulin, that can be generated at a low cost, and toward more expensive analogues (synthetic insulins). Human insulin is equally effective as analogues in most cases, however analogues are at least 1.5 times more expensive, and in certain cases 3 times more expensive; three multinational businesses dominate more than 90% of the insulin market, limiting the potential for smaller companies to compete for sales. Insulin expenses in the United States have been steadily growing for years, forcing diabetics and their families to make difficult decisions. 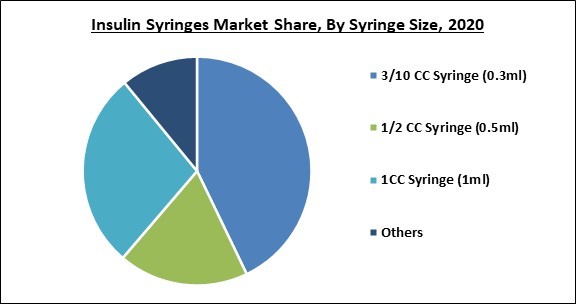 On the basis of Disease, the insulin syringe market is segmented into Type 1 Diabetes and Type 2 Diabetes. Type 2 Diabetes would account for the largest revenue share in the Insulin Syringes Market by 2020. This is due to an increase in the global prevalence of type-2 diabetes. According to the World Health Organization, around 462 million people worldwide have type 2 diabetes in 2019, accounting for 6.28 percent of the global population.

The insulin syringe market is classified into three categories based on syringe size: 3/10 CC Syringe (0.3ml), 1/2 CC Syringe (0.5ml), 1CC Syringe (1ml), and Others. In year 2020, the 1ml syringe size has taken up the majority of sales. These syringes have a 2-unit graduation and are suited for dosages more than 50 units. For an adult who requires a considerable dose of insulin, a 1 mL syringe could be the best option.

On the basis on End User, the insulin syringe market is categorized into Hospitals & Clinics, Homecare Settings, and Others. Due to the rising incidence of chronic illnesses like diabetes and obesity among the population, the hospital & clinics segment earned the biggest revenue share in the insulin syringes market. Furthermore, the rapidly growing geriatric population is a major driver of the insulin syringes industry. According to the American Diabetes Association, around 34.2 million individuals were diagnosed with diabetes in 2019, with 14.3 million of those over 65 years old suffering from the disease.

Based on region, the insulin syringes market is studied across North America, Europe, Asia Pacific, and LAMEA. North America would be the leading region in the Insulin Syringes Market by 2020, with the largest revenue share. This is mostly attributable to the region's sophisticated technology and new product releases by major market participants. Diabetes is the seventh largest cause of mortality in the United States, according to the Centers for Disease Control and Prevention (CDC). Diabetes is no longer confined to wealthy countries, but is increasingly affecting low- and middle-income countries.

The global insulin syringes market size is expected to reach $2.1 billion by 2027.

Availability of low-cost insulin and rising R&D spending are driving the market in coming years, however, high prices of insulin syringes have limited the growth of the market.