The Global Insect Protein Market size is expected to reach $943.3 million by 2027, rising at a market growth of 23.8% CAGR during the forecast period.

Insect protein is a powder made from dried insects after the oil has been removed. Insects are known to be the highest protein source, and they are processed into protein powder. This byproduct is utilized to feed both humans and animals. Undoubtedly, it is an excellent alternative source of protein, with a fast increase in demand over the years, mostly in the feed business.

Insect protein is a good substitute for a variety of animal and plant-based protein sources since it has a greater protein content and can be produced at a low cost. Because of the steady rise in the price of soymeal and fishmeal, feed manufacturers are increasingly turning to insect protein production to meet the growing demand for aquaculture and poultry feed.

Over the forecasting period, demand for insect protein is expected to be driven by rising consumer awareness about the consumption of nutritional food products and a growing inclination for a healthy lifestyle. In addition, the rising health awareness among consumers throughout the world has raised the demand for healthy and nutritious food products, presenting the potential for producers across a wide range of industries to provide such products.

As the world's population grows, so does the demand for food goods. Insect protein has a lot of potential in eliminating food scarcity around the world. Insect protein is used in a variety of goods, including animal feed, food and beverage, cosmetics, and personal care products. In addition, as global food shortage becomes a higher concern, insects are being investigated as a new source of human food and animal feed in Western countries. 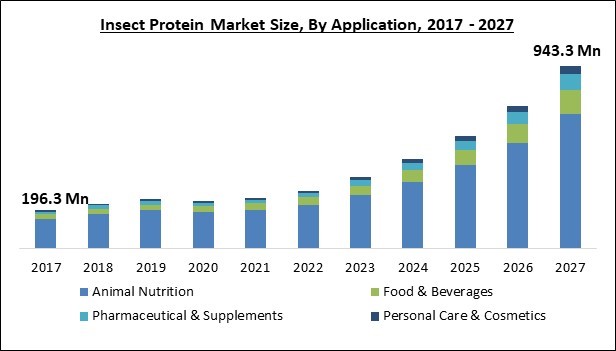 COVID 19 has had an impact on 215 countries. Countries have imposed a lockdown to prevent the harmful consequences, which has had a detrimental impact on the overall insect protein industry. The pandemic created significant disruptions for the food industry. In addition, the insect protein market has been impacted by reasons such as the risk of continued production, supply, distribution, a lack of labor, and fewer development activities.

People aren't eating as much meat as they used to. This has increased the issues for this industry and boosted the demand for alternatives such as edible insects and vegan products. However, long-term animal protein consumption can be beneficial to human health.

The growing number of potential applications of Insect Proteins

These can be found in both water-soluble and water-insoluble forms in nature. This has resulted in an increase in bug feed sales all around the world. Insect feed nourishes livestock and encourages healthy growth. As farmers seek alternative protein sources in insects, the demand for such products is likely to increase in the upcoming years. In addition, insects have a higher protein content than other animals and plants. Some years ago, Insect protein was solely utilized as an ingredient in animal feed. However, as people have become more aware of the high protein content of insects, it has become more commonly used in a variety of businesses.

Rising demand for Insect protein in the aquaculture industry

The aquafeed industry is always on the lookout for new sources of nutrition. As a result, the market for mealworms and fly larvae is becoming more competitive. The most regularly utilized aquafeed ingredients, fish meal, and soymeal are both costly. As a result, the demand for superfoods is increasing.

The demand for alternative and economical protein sources, like edible insects for animal feed, is increasing as aquaculture output grows. Insect protein is widely used in processed food products, including pasta, burgers, branded cookies, patties, nutritious snacks, and others. It is less expensive to produce and provides a long-term health benefit. The edible insects are frequently used to feed cattle, lambs, pigs, and broiler chickens because they are high in vitamins, amino acids, and high-quality protein.

A Growing Number Of Vegan Population

As compared to other alternative protein sources, edible insect and insect protein are used in a very limited number of foods, drinks, and nutritional supplements. The majority of people in India and throughout the world are unaware that insects can be used as a food source and a protein supplement. Thus, this lack of awareness towards these products would act as a major barrier to their adoption. In addition, the rising number of vegetarian and vegan popularity around the world would be a major challenge for the industry players. 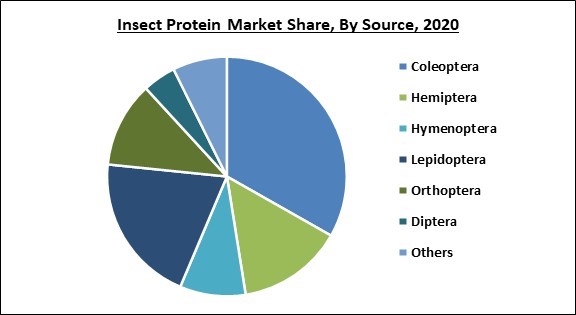 Based on Source, the market is segmented into Coleoptera, Hemiptera, Hymenoptera, Lepidoptera, Orthoptera, Diptera, and Others. The Lepidoptera segment held a significant revenue share of the overall insect protein market in 2020. This is because Lepidoptera is one of the primary sources of insects used for generating insect protein and covers insects such as caterpillars, butterflies, and moths. In addition, many consumers are embracing this protein type to get essential proteins.

Based on Application, the market is segmented into Animal Nutrition, Food & Beverages, Pharmaceutical & Supplements, and Personal Care & Cosmetics. In 2020, the animal nutrition segment procured the largest revenue share of the overall insect protein market. Insect protein is generally used as a feed supplement for poultry, aquaculture, and other livestock. In addition, animal feed makers are developing interest in high digestibility band amino acid and protein content. Moreover, manufacturers in the animal nutrition industry will profit from categories such as pet food and aquaculture.

The insect protein market size is projected to reach USD 943.3 million by 2027.

The growing number of potential applications of Insect Proteins are driving the market in coming years, however, a growing Number Of Vegan Population limited the growth of the market.

The Coleoptera segment is leading the Global Insect Protein Market by Source in 2020; thereby, achieving a market value of $285.5 million by 2027.

The Europe is fastest growing region in the Global Insect Protein Market by Region in 2020, and would continue to be a dominant market till 2027.