The Global In Vitro Toxicity Testing Market size is expected to reach $37.5 billion by 2028, rising at a market growth of 10.8% CAGR during the forecast period.

The term "in vitro" refers to a method for testing dangerous compounds on a section of an organism that has been isolated. It is used to identify dangerous chemical chemicals and to detect toxicity in new goods such as cosmetics, pharmaceuticals, and food additives at an early stage of development. In vitro toxicity testing (IVTT) is generally used in medication development to assess the safety and to evaluate compounds as per their effectiveness.

In-vitro testing is a cost-effective and time-saving method of determining toxicity. Rapid advancements in biomedical sciences are expected to lead to the development of newer and more advanced in-vitro test methodologies for hazard characterization. Toxicity testing is gradually improving, with the help of much new technology. It is currently well-positioned to benefit from promising biotechnology revolutions.

Computational toxicology, Bioinformatics, epigenetics, and other modifications in toxicity testing methodologies have the potential to alter the paradigm away from whole-animal testing and toward in-vitro methods that examine changes employing cell lines as well as other biological components in a variety of processes. A variety of new domains and methodologies are revealing important new information about biological responses to substances in human tissues. During the projected period, these advancements are expected to propel the in-vitro toxicology market ahead. 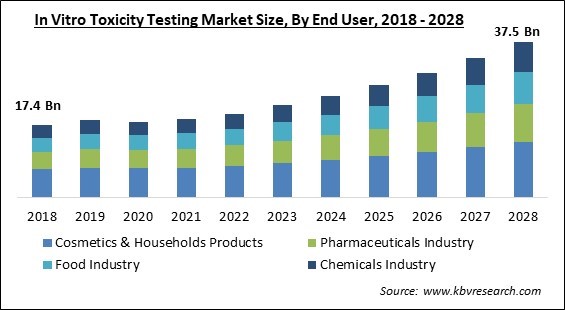 Many enterprises in vitro toxicity testing industry were compelled to temporarily halt activities due to the COVID-19 pandemic, to ensure compliance with new government rules aimed at preventing the disease's spread. This halt in operations has a direct impact in vitro toxicity testing market's revenue flow. In addition, due to a scarcity of raw materials and people during the lockdown, the production of industrial products came to a halt. Furthermore, enterprises in this industry do not get any fresh consignments. As a result, the in vitro toxicity testing market has been negatively impacted by the suspension of industrial activity and lockdowns for several months.

The pharmaceutical industry's productivity has decreased in recent years as development cost has increased and the profitability of newly launched medical entities (NMEs) has decreased. The malfunction of encouraging new drug applicants due to the negative impact revealed throughout animal experimental safety studies and clinical is one of the biggest challenges facing the pharmaceutical industry. Before pharmaceuticals enter clinical trials, strategies to demonstrate or anticipate effectiveness and safety in people could dramatically reduce the failures rate of new therapies. Personalized medications and drug discovery using in vitro approaches have received more attention.

Testing a product designed for human use on the skin surface is the most intelligent method to do it. In vitro testing can be done with human hair follicles, human primary skin cells, human reconstructed epidermis, or human skin explants. In vitro testing procedures based on rebuilt human cells or skin can yield results in a couple of days or weeks. Animal testing, on the other hand, can take months. In vitro testing allows evaluating and validating the mechanism of action of cosmetics components or solutions at the cellular and molecular levels. This is a great technique to back up an inventive idea and a patent application. In vitro testing has grown in popularity as a result of widespread opposition to the death and suffering of lab animals. In vitro testing becomes increasingly important for the cosmetics business as more countries and consumers abandon animal testing.

Regulatory authorities' reluctance and a scarcity of qualified professionals

Across a variety of industries, there has been a growing emphasis on the use of in vitro toxicity testing procedures. Validated alternative tests can be used instead of in vivo tests by regulatory agencies. In such cases, in vitro approaches must demonstrate their superiority in terms of safety and efficacy over animal methods. Even after the assay has demonstrated its superior scientific significance, several countries have indicated a reluctance to use in vitro testing over in vivo procedures. Animal testing data is still used by a range of regulatory authorities in the United States. For the evaluation of new toxicological test methods, many agencies employ in vivo methodologies.

Based on Type, the market is segmented into Absorption, Toxic Substances, and Dose. The absorption segment procured the highest revenue share in the In Vitro Toxicity Testing Market in 2021. For instance, in vitro dermal absorption is a test that determines the behavior of a test substance when it is applied to the skin's surface. The skin specimen is positioned between two chambers of a diffusion cell (donor chamber and receptor chamber), which can be static or flow-through.

Based on Technology, the market is segmented into Cell Culture Technologies, High Throughput Technologies, and Toxicogenomics. The toxicgenomics segment recorded a significant revenue share in the In Vitro Toxicity Testing Market in 2021. It can give a collection of generalized expression profiles for many kinds of toxicity, enabling an unknown substance to be described depending on which profiles it matches. While genomics is widely utilized for linkage analysis and marker characterization, it has not yet been properly integrated into toxicity testing and risk assessment methodologies.

Based on End User, the market is segmented into Cosmetics & Households Products, Pharmaceuticals Industry, Food Industry, Chemicals, and Industry. The cosmetics and households products segment acquired the largest revenue share in the In Vitro Toxicity Testing Market in 2021. In vitro testing has long been used as a substitute for animal testing, and recent technology advancements have enabled the cosmetics industry to use sophisticated yet cost-effective in vitro models. This is due to strict government regulations and the prohibition of animal testing, as well as perks such as cost-effectiveness, reduced time consumption, and improved toxin detection efficiency.

Based on Regions, the market is segmented into North America, Europe, Asia Pacific, and Latin America, Middle East & Africa. The North America segment acquired the largest revenue share in the In Vitro Toxicity Testing Market in 2021. Due to a greater focus on drug discovery by government agencies, and increase in healthcare spending, and the availability of suitable infrastructure for the development and growth of drug development technologies Furthermore, strict regulatory standards governing medication development and clearance have expanded the use of in-vitro toxicology testing services in the market sector. The demand for in-vitro toxicity testing is being propelled by biopharmaceutical firms' recurring introductions of biologics and bio similar pharmaceuticals in the United States.

The in vitro toxicity testing market size is projected to reach USD 37.5 billion by 2028.

Techniques usage in cosmetic industry are driving the market in coming years, however, regulatory authorities' reluctance and a scarcity of qualified professionals growth of the market.

The Cell Culture Technologies segment acquired maximum revenue share in the Global In Vitro Toxicity Testing Market by Technology in 2021, thereby, achieving a market value of $22.1 billion by 2028.

The North America market dominated the Global In Vitro Toxicity Testing Market by Region in 2021, and would continue to be a dominant market till 2028; thereby, achieving a market value of $13.9 billion by 2028.