The Global Ginger Beer Market size is expected to reach $6.7 billion by 2028, rising at a market growth of 6.9% CAGR during the forecast period.

Ginger beer is a fizzy, sweetened, non-alcoholic beverage. It was created by the natural fermentation of ginger spice, yeast, and sugar. Current ginger beers are typically produced as opposed to brewed, frequently with flavor and color additions and artificial carbonation. Ginger ale is not a brewed beverage. Ginger beer dates back to the colonial spice trade between the Orient and the sugar-producing islands of the Caribbean. 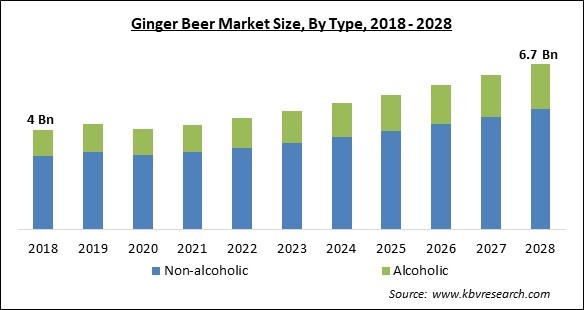 It gained popularity in Britain and its colonies in the eighteenth century. Few brewers have maintained an alcoholic product since 1855 when excise tax restrictions limited the alcohol concentration to 2% and other spices were added in varying amounts. From fermented ginger, sugar, and water, ginger beer is still made at home using a symbiotic colony of yeast and Lactobacillus (bacteria).

The fermentation process is initiated with ginger beer plant (GBP), a sort of fermentation starter. Also known as "bees’ wine," "Palestinian bees," "California bees," and "balm of Gilead," it is not a plant but rather a composite organism consisting of the yeast Saccharomyces florentines and the bacterium Lactobacillus hilgardii, which form a (SCOBY). Similar to kefir grains, kombucha, and tibicos, it develops a gelatinous material that enables it to be readily transported from one fermenting substrate to the next.

Original ginger beer is produced by fermenting water, sugar, ginger, optional additions such as lemon juice and cream of tartar, and GBP for several days, therefore turning a portion of the sugar into alcohol. GBP is obtainable through a variety of commercial sources. The National Collection of Yeast Cultures (NCYC) possessed an old sample of "Bees wine" in 2008, but the current staff has not used it, and the NCYC is unwilling to provide it due to safety concerns because the sample's exact composition is unclear

The COVID-19 pandemic has had an impact on markets all around the world for ginger beer. As a result of the ongoing lockdown scenario, every industry has been forced to shut down, which, in turn, is affecting output. Because of the need to keep a social distance, nearly all of the bars, restaurants, pubs, and liquor stores in virtually all of the nations have been closed. This has disrupted the sales volume and frequency of ginger beer. Most nations' economies are heavily dependent on the sale of alcoholic beverages because of the money they provide.

The desire for beverages that are low in alcohol and gluten-free, in particular among customers who are health concerned, is anticipated to promote the market expansion of ginger beer in the future. This need is a direct outcome of different dietary restrictions. The number of people drinking beverages made with ginger beer is rising, and key players in the sector are developing new products to satisfy this demand.

Reduces the Signs of Aging

Consuming ginger beer regularly will assist to slow the aging process and the indications that come along with it. Simply inhaling its scent has the power to improve mood and put it in a better frame of mind. Stress, whether it's emotional or psychological, speeds up the natural aging process. Ginger beer will undoubtedly provide a sense of calm, and it also has the potential to strengthen the resolve to carry on with the activities that are part of regular lives. The normal metabolic process in the body produces free radicals as a by-product.

There are serious risks associated with drinking beer

Consuming alcohol of any sort, even beer, can affect the amount of sugar that is dissolved in the blood in bodies. To look at this process in further detail, the liver will release the chemical into circulation once it has converted glycogen into glucose. At this point, the negative consequences of drinking beer daily are significant only if excessive amounts are consumed over the recommended limits. In particular, the presence of alcohol in the drink might disrupt the process by causing feelings of hunger to arise. 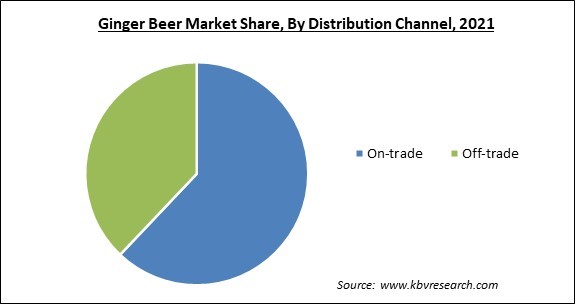 Based on the Type, the Ginger Beer Market is segmented into Alcoholic and Non-alcoholic. The non-alcoholic segment acquired the highest revenue share in the ginger beer market. The increasing popularity of flavored beverages, such as ginger beer, among consumers, particularly millennials, would complement the rising trend. In addition, the increased popularity of craft cocktails and do-it-yourself beverages is prompting prominent producers to release a variety of mixer packs, including lemon-lime and ginger beer.

On the basis of Flavor, the Ginger Beer Market is divided into original and flavoured. The original segment recorded a substantial revenue share in the ginger beer market. The increasing use of ginger beer in alcoholic beverages such as cocktails and mules will bolster the segment's annual growth in the coming years. Ginger beer cocktails have an energizing, sharp taste with a hint of spice, which has prompted restaurants, taverns, and clubs to add them to their menus to expand their product selection.

By Distribution channel, the Ginger Beer Market is classified into On-trade and Off-trade. The on-trade segment garnered the highest revenue share in the ginger beer market. Bars, clubs, lounges, restaurants, motels, and cafés are all examples of establishments that fall under the "on-trade" distribution route. As a result of the widespread COVID-19, many businesses had to close their doors, which had a significant negative impact on the expansion of the on-trade sector.

Region-wise, the Ginger Beer Market is analyzed across North America, Europe, Asia Pacific, and LAMEA. The North America segment acquired the largest revenue share in the ginger beer market. It is anticipated that demand for the product would be driven by an increase in consumers' knowledge of the importance of health and well-being in their daily lives in the region. In comparison to the consumption levels of other nations in the region, countries such as the United States have quite high levels.