The Global Fortified Wine Market size is expected to reach $27.3 billion by 2028, rising at a market growth of 10.9% CAGR during the forecast period.

Fortified wine is wine that has been fortified with distilled spirits, usually brandy. It is done to delay fermentation and avoid spoilage. These big wines are made by adding a neutral grape spirit to a base wine to boost the alcohol concentration and extend the shelf life. Apart from the higher alcohol concentration, fortified wines are distinguished from conventional kinds by their distinct flavor and aroma.

The niche market for wine, which includes fortified wine, sparkling wine, and other varieties, is expanding. Vintages and grapes are mixed together to make fortified wine. To increase the flavor and power, it is distilled with liquor such as brandy. It is also commonly referred to as dessert wine because of its high sweetness level and proclivity for being sipped after meals. This product has two primary variants: dry wine and sweet wine, the manufacture of which is dependent on the amount of brandy added over time. The less expensive the wine, the shorter the time it took to distill with brandy. Fortified wine is very popular because of its nutritional value.

This is due to the health benefits provided as well as the premiumization of wine goods. Furthermore, technological advancements and improvement in manufacturing, as well as taste innovation, are expected to accelerate market expansion in the future years. The industry's expansion is being aided by increased consumption and demand for alcoholic beverages at various special events. Consumption of the product is regarded as a necessity in social events like marriages. This is bound to propel the market forward throughout the upcoming years. Furthermore, there are numerous health benefits related with the use of fortified wine.

Additionally, various manufacturers' rising investment in R&D to generate unique fortified wine products around the world is creating potential for the market in the next years. Government guidelines in the United States, Germany, the United Kingdom, China, and India, on the other hand, are expected to maintain the quality of fortified wine products. The Food Safety and Standards Authority of India (FSSAI) recently drafted and published the alcoholic beverages standard regulations 2018 for wine production and labeling. 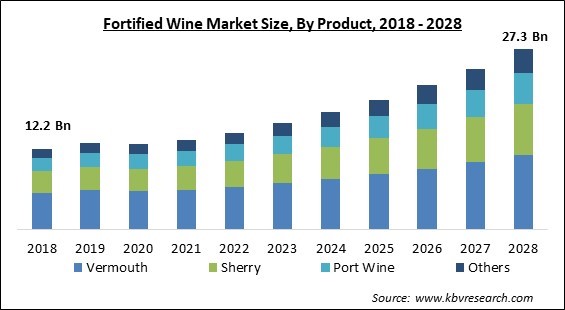 The fortified wine market has been negatively impacted by the COVID-19 outbreak. All industries were shut down as a result of the lockdown, affecting production. In practically every country, all bars, restaurants, pubs, and liquor stores were closed, affecting wine sales volume and frequency. Alcohol products were not included in the government's list of necessary things.

In the next few years, prominent companies' increasing spending on product marketing and promotion to improve consumer awareness are expected to considerably contribute to industry growth. Various countries, particularly those outside of Europe, have a skewed perception of fortified wines, and their flavor is viewed as bad and unsuitable. The increase in promotional activities to raise the awareness around the benefits of fortified wine and making fortified wine an irremovable part of social gatherings and fine dining is likely to help the market grow. As a result, the expanding educational marketing of fortified wine is predicted to benefit the fortified wine industry's expansion.

Wine is naturally richer in sugar than most types of alcohol because it is manufactured from grapes. Many forms of fortified wine have even more sugar because spirits are added to the wine during the fermentation process before the sugars are converted to alcohol. Other varieties are sweetened after fermentation, increasing the sugar content even further. Port wines, which are sweet dessert wines, have about 7 grams of sugar every 3-ounce (88-ml) cup. Sugar consumption has been related to a variety of health problems, including diabetes, obesity, liver issues, and heart disease. As a result, the 2015–2020 Dietary Guidelines for Americans recommend limiting added sugar consumption to less than 10% of daily calories, or around 50 grams on a conventional 2,000-calorie diet. 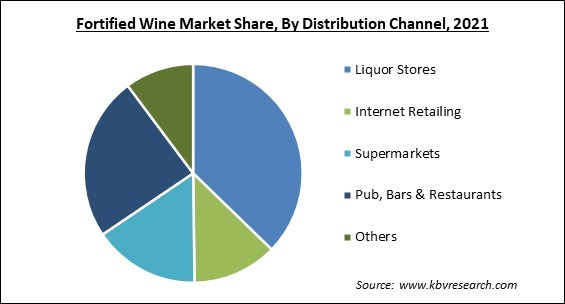 Based on Distribution Channel, the market is segmented into Liquor Stores, Internet Retailing, Supermarkets, Pub, Bars & Restaurants, and Others. The pubs, bars, and restaurants segment procured a substantial revenue share in the fortified wine market in 2021. Pubs and bars have been an important social hub in many developed countries for a long time and with the rise in disposable income in developing countries, this culture is spreading there as well. Since fortified wines are considered dessert wines by many, there is a demand for these wines in many high-end restaurants. Consumers prefer to consume fortified wines after completing their dinner.

Based on Product, the market is segmented into Vermouth, Sherry, Port Wine, and Others. The vermouth segment acquired the highest revenue share in the fortified wine market in 2021. The growing usage of vermouth wine as an antiseptic and medicinal medication to treat colds and viral infections has resulted in the high demand for vermouth in the market. Vermouth is a fortified white wine that's commonly flavored with herbs and spices like cloves and cinnamon. It's available as both dry and sweet. The consumption of vermouth gives the body a digestive aid. It is also an anti-inflammatory and a pleasing way to enhance the immune system and reduce stress.

Based on Regions, the market is segmented into North America, Europe, Asia Pacific, and Latin America, Middle East & Africa. Europe acquired the largest revenue share in the fortified wine market in 2021. The market in this region is likely to be driven by rising wine consumption in countries such as Germany, France, Italy, Spain, and Portugal. Furthermore, the increased demand for flavored wine is expected to drive market growth throughout the forecast period.