The Global Foot Orthotic Insoles Market size is expected to reach $4.5 billion by 2028, rising at a market growth of 5.9% CAGR during the forecast period.

The purpose of a foot orthotic insole is to correct foot abnormalities and maintain the biomechanical alignment of the foot. Modern orthotic insoles are becoming increasingly popular since they help people with pain management and daily comfort. Worldwide demand for foot orthotic insoles is projected to increase as the prevalence of chronic pain caused by various health issues rises. 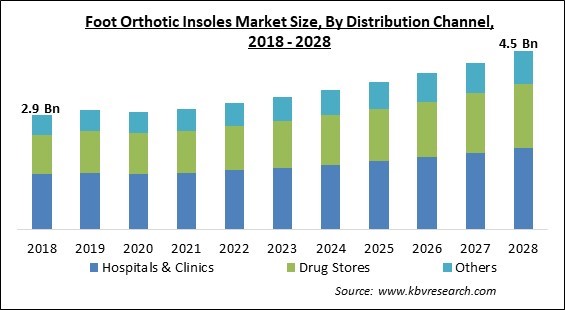 Often referred to as orthotics, foot orthoses are custom-made shoe inserts that support the feet and enhance foot posture. A podiatrist may recommend orthoses for those who have persistent foot or leg issues that affect the health and functionality of their feet. For instance, someone who is prone to calluses could utilize specially made shoe inserts to rebalance the weight of their body across their feet. Additionally, athletes may wear orthotics to assist address any foot issues that can impair their performance.

Orthotic insoles are medical devices worn inside the shoe on a prescription to treat foot issues and ease discomfort. Since they are detachable, users can wear them with several pairs of shoes. A trained podiatrist working in a specialized orthotics service should prescribe orthotics. This is due to the fact that the proper prescription involves the ability to do a thorough analysis of the biomechanical dysfunction in the foot and determine how it affects the gait.

During the projected period, the COVID-19 pandemic outbreak is probably going to have a moderate effect on the market. The market expansion is probably going to be slowed down by research and development efforts to determine the harm that the SARS-CoV-2 virus poses to sick individuals. The COVID-19 outbreak has significantly hampered the ability of the worldwide healthcare system to address non-communicable diseases. Providing effective care has become difficult during the pandemic period. Most healthcare workers were busy with the treatment and care of patients with COVID-19 and such non-communicable disorders were considered less important during the pandemic period.

Plantar fasciitis is a typical degenerative ailment that affects persons 45 to 50 years of age or older. People with diabetes are especially at risk since it typically causes persistent heel pain. Older age, feminine gender, certain types of activity that put a lot of stress on the heel and connected tissue, poor foot mechanics, obesity, jobs that require a lot of standing, and wearing the wrong shoes are more at risk of developing plantar fasciitis.

Companies are employing cutting-edge production practices to enhance workflow and increase output as technological improvements catch up. The major advancement in manufacturing technology includes the advancement of scanning technology leading to the mass production of foot orthotic insoles. The first innovative foot scanners were laser scanners and stereophotigrammetric machines.

The Cost Of Raw Materials Is Generally High

Raw materials like plastic, leather, and rubber are now more expensive. Unbalances in the supply and demand of materials have an effect on the industry. In recent years, the raw materials needed to produce foot orthotic products accounted for around half of total production expenditures. For instance, the recent ban on the animal slaughter in some regions has had a big impact on the leather industry because regions such as India is a major supplier of leather all over the globe.

Based on material, the foot orthotic insoles market is segmented into thermoplastics, composite carbon fiber and others. In 2021, the thermoplastics segment dominated the foot orthotic insoles market with the maximum revenue share. This is due to the advantages of this material, including its high level of comfort and durability. People who take care of their feet and others who want therapeutic support when walking are increasingly using thermoplastic, a heat-molded material. For elderly individuals with a large physiological reserve and unyielding foot, rigid thermoplastics have limited use. 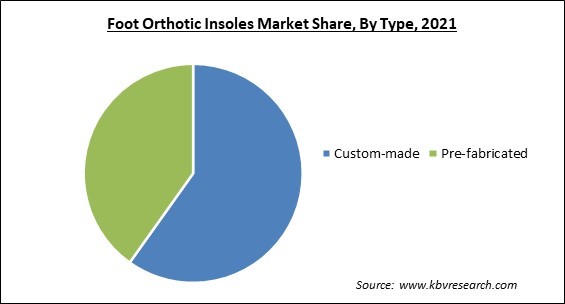 Region wise, the foot orthotic insoles market is analyzed across is analyzed North America, Europe, Asia Pacific and LAMEA. In 2021, the North America region led the foot orthotic insoles market by generating the highest revenue share. This is due to the increased incidence of diabetes in this region. Demand is also fueled by an increase in sporting activities. In the upcoming years, growth potential is anticipated to improve due to technological advancements brought on by significant continuous investments in R&D.

The global Foot Orthotic Insoles Market size is expected to reach $4.5 billion by 2028.

Advanced Technologies Supporting Market Growth are driving the market in coming years, however, The Cost Of Raw Materials Is Generally High restraints the growth of the market.

The Custom-made segment acquired maximum revenue share in the Global Foot Orthotic Insoles Market by Type in 2021 thereby, achieving a market value of $2.6 billion by 2028.

The North America market dominated the Global Foot Orthotic Insoles Market by Region in 2021, and would continue to be a dominant market till 2028; thereby, achieving a market value of $1.8 billion by 2028.