The Global Ethnic Wear Market size is expected to reach $164.67 billion by 2027, rising at a market growth of 10.82% CAGR during the forecast period.

Ethnic wear is a term used to define a type of clothing that belongs to a specific nation or group of people. This type of clothing showcases the tradition of a nation as well as the rich diversified sense of dressing of the people. One of the most popular ethnic wear across the globe is Indian ethnic wear, which is accompanied by Singapore, Australia, Cambodia, Indonesia, Thailand, Japan, and the Philippines. 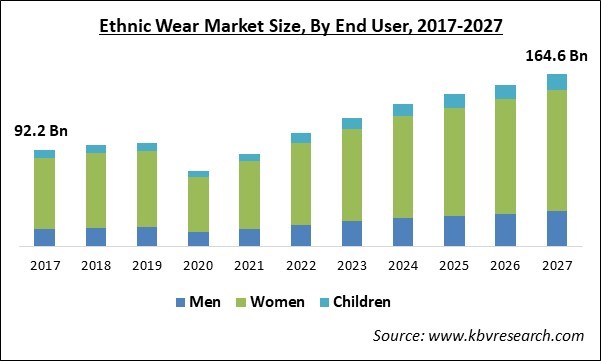 The outbreak of the COVID-19 pandemic has affected various verticals of the business world. It is due to the imposition of various regulatory norms like lockdowns, social distancing, and travel ban across borders. The disruption caused across various sales channels along with the significant changes in the customers’ preferences and habits has also affected the overall ethnic wear market.

Owing to the unavailability of raw materials and the shutdown of manufacturing units to curb the spread of the virus, the demand for ethnic wear has declined drastically. The shifting preference of the customers towards online shopping platforms due to the pandemic would support the demand and growth of the ethnic wear market in the upcoming years.

The increasing popularity of Indian ethnic wear across the globe

The rapid pace of globalization

With the rapid pace of globalization, the penetration of different cultures and clothing has increased across various parts of the world, which would create lucrative opportunities for many apparel companies to expand their business. The global fashion industry has contributed to the constantly changing fashion trends across the world, which is followed by numerous people in order to try out new fashion wear. The supportive government policies of the emerging nations to attract global companies to enter their regional market would further create opportunities for the regional ethnic wear companies.

Less acceptance of ethnic wear in the corporate world

There is less acceptance of ethnic wear in the corporate sector, which would restrict the demand for ethnic wear in the world. Vibrant colors, heavy designs, and patterns are not allowed in the corporate sector as they are considered to be informal, which would restrict people from adopting ethnic wear for their offices. In addition, the growing population of working women across the world would further hinder the demand for ethnic wear among working women, which is anticipated to hamper the growth of the ethnic wear market over the forecast period. 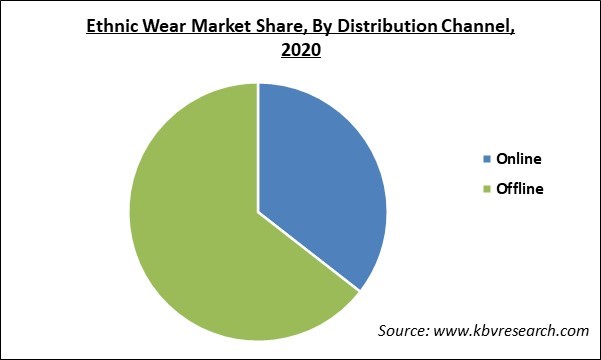 Based on End Users, the ethnic wear market is classified into men, women, and children. Men end-user segment procured a substantial revenue share in 2020 and is anticipated to witness a considerable growth rate during the forecast period. The rise in the number of aspiring fashion designers, the increasing popularity of fashion wear among millennials, and the advent of mass & digital marketing strategies by numerous fashion brands have significantly transformed the dynamics of the ethnic wear market for men across the world. Ethnic wear is one of the essential apparel in any person’s wardrobe during festivals and weddings.

Based on Distribution Channel, the ethnic wear market is bifurcated into online and offline. The online store segment is anticipated to exhibit a prominent growth rate during the forecast period. The COVID-19 pandemic has motivated consumers to reconsider their life priorities, which would lead to new values and spending norms.

Based on Regions, the market is segmented into North America, Europe, Asia Pacific, and Latin America, Middle East & Africa. In 2020, the Asia Pacific emerged as the leading region in the ethnic wear market with the highest revenue share and is estimated to witness a notable growth rate during the forecast period.

The increasing popularity of Indian ethnic wear across the globe are driving the market in coming years, however, less acceptance of ethnic wear in the corporate world limited the growth of the market.

The shifting preference of the customers towards online shopping platforms due to the pandemic would support the demand and growth of the ethnic wear market in the upcoming years.

The Women market dominated the Global Ethnic Wear Market by End User in 2020 thereby growing at a CAGR of 10.4% during the forecast period. It is due to the growing population of females and rising women workforces.

The Asia Pacific market dominated the Global Ethnic Wear Market by Region in 2020, and would continue to be a dominant market till 2027; thereby, achieving a market value of $67.60 billion by 2027.