The Global Electrophysiology Market size is expected to reach $11.9 billion by 2028, rising at a market growth of 8.8% CAGR during the forecast period.

Electrophysiology (EP) devices are a type of medical equipment that is used to diagnose and treat cardiovascular problems. These gadgets assess aberrant heartbeats by analyzing the electrical impulses of the heart. Pacemakers, Implantable cardioverter defibrillators (ICDs), automated external defibrillators (AEDs), radiofrequency ablation catheters, cryoablation EP catheters, and microwave & laser ablation systems are some of the most often utilized EP devices. In the event of an emergency, these devices send & receive electrical signals to & from the heart to regulate the heartbeat. They are non-invasive & assist in the removal of defective heart tissues that might cause abnormal heart rhythms.

As per a study published in the International Journal of Stroke in January 2020 by Giuseppe Lippi et al., atrial fibrillation is the most common cardiac arrhythmia worldwide. As per predictions, 17.9 million people in Europe will suffer atrial fibrillation by 2060. Moreover, the incidence and prevalence of the disease have increased over the previous 20 years & will continue to rise over the next 30 years, particularly in nations with a middling socio-demographic index, making it one of the most serious pandemics and public health problems. In 2050, the global burden of atrial fibrillation is expected to rise significantly. As a result of the increased prevalence of atrial fibrillation, electrophysiology operations are likely to become more popular soon. Additionally, a significant rise in the ageing population has been linked to an increase in heart failure rates.

Technological improvement is driving the industry forward. For example, Abbott Laboratories released an improved heart monitor in May 2019 to improve the accuracy of arrhythmia detection. The next-generation Confirm Insertable Cardiac Monitor (ICM) has been cleared for commercialization by the US Food and Drug Administration (FDA) & the CE Mark in Europe. It's a paperclip-sized implantable device with smartphone connectivity and continuous, remote monitoring that tracks irregular cardiac rhythms for a quick and exact diagnosis.

As per the World Health Organization (WHO), there were over a billion persons aged 60 and up in 2019. By 2030, this number is expected to rise to 1.4 billion, and by 2050, to 2.1 billion. In addition, according to a study by the European Society of Cardiology, roughly 7.6 million people over 65 in Europe had atrial fibrillation in 2016, and this number is expected to rise by 89 percent to 14.4 million by 2060. Strokes are more common in the elderly. As a result, market participants are interested in the creation of effective goods that will aid the overall industry growth to cater to the growing patient population. 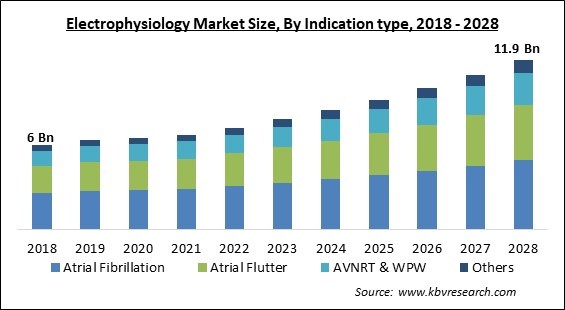 The COVID-19 pandemic's impact and the resulting lockdown can be seen in a variety of industries, comprising the electrophysiology market. While industries like oil & petroleum, aeronautics, & mining are seeing a drop in revenue, the healthcare, biotechnology, and pharmaceutical industries are taking advantage of the situation to serve as many patients & healthcare professionals as possible. In 2021, the COVID-19 pandemic harmed the economy and posed numerous obstacles to clinical healthcare practitioners and patients all over the world. Logistical concerns, illness management, prioritizing patients with comorbidities and pre-existing disorders, and further protecting the public and hospital frontline staff from COVID-19 are all key challenges that healthcare systems around the world are dealing with.

The incidence of target diseases & procedures is on the rise

As per the World Health Organization, cardiovascular disease is the dominating cause of mortality worldwide. Family history, ethnicity, & age are all major contributors to the increased prevalence of CVD and strokes. Tobacco use, high cholesterol, high blood pressure (hypertension), obesity, physical inactivity, diabetes, poor diets, and alcohol drinking are all risk factors. Hypertension, dyslipidemia, diabetes, and obesity are all contributing to an increase in the incidence of CVD. As per the American Heart Association, 41.4 percent of adults in the United States will have hypertension by 2030. (An increase of 8.4 percent from 2012). According to the WHO organization, CVD expenses would reach USD 1,044 billion by 2030, up from USD 863 billion in 2010. CVD claimed the lives of 17.9 million persons worldwide in 2016. By 2030, it is expected that this number will have risen to 23.6 million.

An increasing number of emerging markets

The growing rate of reusing & reprocessing of devices

Ablation catheters are classified as single-use devices by the FDA and the European Union (SUDs). Although due to their high per-unit cost and restricted reimbursement, these devices are being reprocessed and reused, mostly in hospitals with limited budgets. The cost of reprocessing and reuse for a hospital/surgical center is significantly less than the cost of a new ablation device, resulting in a reduction by half in overall procedure costs. 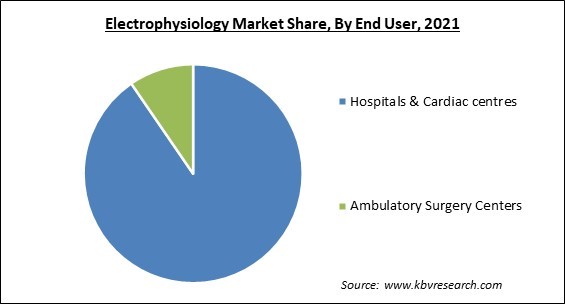 Based on Electrophysiology Ablation Catheters Type, the market is segmented into Laser, Cryoablation, and Radiofrequency (RF) & Microwave. The laser sub-segment acquired the highest revenue share in the electrophysiology market in 2021. The increasing spending by the manufacturers on the R&D activities for the advancements of laser ablation catheters would augment the growth of the segment in the coming years.

Based on End User, the market is segmented into Hospitals & Cardiac centres, and Ambulatory Surgery Centers. The ambulatory surgery centers segment procured a substantial revenue share in the electrophysiology market in 2021. Ambulatory surgery centers (ASCs) offer operational and financial benefits, such as lower prices, easier patient access, and more chances for physician interaction. As a result, Corazon believes that hospitals and healthcare systems should investigate how to profit from this trend, particularly in the cardiovascular service line.

Based on Regions, the market is segmented into North America, Europe, Asia Pacific, and Latin America, Middle East & Africa. The North American region acquired the highest revenue share in the in the electrophysiology market with the largest revenue share in 2021. Obesity, heart disease, and other chronic diseases are on the rise in these countries as a result of changing lifestyles & eating habits, rising stress, & rising habitual smoking & drinking. Large populations, rising geriatric populations, rising chronic disease incidence, increasing healthcare spending, healthcare reforms for infrastructure development, rising demand for advanced technologies, prominent players' increasing focus on emerging markets, and less stringent regulations are all driving demand for electrophysiology devices in this region.

The major strategies followed by the market participants are Partnerships. Based on the Analysis presented in the Cardinal matrix; Johnson & Johnson are the forerunners in the Electrophysiology Market. Companies such as General Electric (GE) Co., Siemens Healthineers AG, MicroPort Scientific Corporation are some of the key innovators in the Market.

The global electrophysiology market size is expected to reach $11.9 billion by 2028.

An increasing number of emerging markets are increasing are driving the market in coming years, however, the growing rate of reusing & reprocessing of devices growth of the market.

Yes, COVID-19 pandemic harmed the economy and posed numerous obstacles to clinical healthcare practitioners and patients all over the world.

The Hospitals & Cardiac centers segment acquired maximum revenue share in the Global Electrophysiology Market by End User in 2021, thereby, achieving a market value of $10.6 billion by 2028.

The North America is the fastest growing region in the Global Electrophysiology Market by Region in 2021, and would continue to be a dominant market till 2028.