The Global Electric Bike Market size is expected to reach $73.2 billion by 2026, rising at a market growth of 11.2% CAGR during the forecast period. The electric bike contains different components such as pedals, an in-built electric motor, & rechargeable batteries in order to increase propulsion. Unlike traditional bicycles, e-bikes facilitate commuters to travel longer distances with relatively high speed. They are comparatively low-priced than electric scooters, motorcycles, & mopeds, and there is no need for insurance or a license for these bikes. The E-bike is an emerging technology that has achieved high popularity across several countries including Netherland, China, India, and Japan. Though, the e-bike industry is still at the initial stage with a lot of space for expansion.

The electric market would be redefined by a blend of several macro-economic & micro-economic aspects. The manufacturing & design of comfortable, eco-friendly electric bikes have been facilitated by constant technological developments. Consumers are getting more aware of the urgent need to decrease their carbon footprint & this aspect will impact the demand for electric bikes positively.

The sales of electric bikes are supported by favorable governmental policies & stringent rules in different countries. In metro cities particularly in European and North American countries, innovative concepts such as rental service & public charging frameworks are in high demand. The adoption of electric bikes would be augmented by the rising funding on the R&D activities by various market players, to create new high-efficiency batteries and develop superior performance vehicles. In addition, manufacturers are adopting different marketing tactics such as displaying their electric bike product as an eco-friendly option, which is capable of lowering down air pollution as well as substantially decrease the greenhouse effect as they display low tailpipe emissions.

Based on Drive Mechanism, the market is segmented into Hub Motor, Mid-drive and Others. The hub motor segment dominated the e-bike market and would maintain a similar trend over the forecast years. The low costs of these motors are credited to the consistent utilization of a similar design in some instances for many years. However, the hub motors are relatively heavier than the mid-drives, which could hinder the efficiency of an electric bike suspension. The vehicle uses both rear & front hub motors according to their application; this would fuel the revenue streams of the hub motor segment in the e-bike market.

Based on Battery Type, the market is segmented into Lithium ion (Li-ion), Lead Acid and Others. The lithium-ion (Li-ion) segment acquired the highest revenue in 2019. This growth is due to their properties such as light-weight, huge capacity, & also displays an abrupt reduction in the price in the last few years. Various governments imposed strict regulations regarding the utilization of lead-acid batteries as their chemicals release harmful gases which result in severe environmental issues. Human health could be negatively impacted due to the release of lead in groundwater. 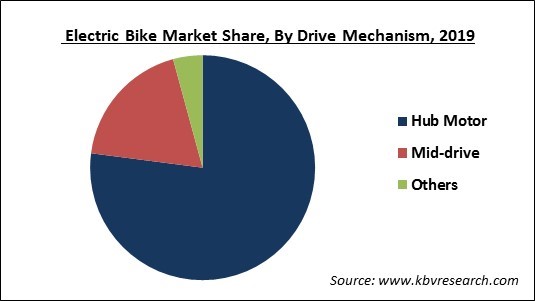 Based on Product, the market is segmented into Scooter/Motorcycle, Pedelecs, Throttle on Demand and Speed Pedelecs. The scooter & motorcycle segment procured the maximum revenue share in 2019. This is owing to the fact that scooters & motorcycles are highly beneficial in decreasing carbon dioxide (CO2) emission & noise pollution. Though, the throttle on-demand segment would exhibit a promising growth rate during the forecast period. It is due to the high prominence of throttle-operated electric bicycles among commuters.

Based on Regions, the market is segmented into North America, Europe, Asia Pacific, and Latin America, Middle East & Africa. In 2019, Asia-Pacific emerged as a leading region with respect to the revenue share, followed by Europe, North America, and LAMEA. China garnered the maximum revenue share of the global electric bike market in 2019. Though, Mexico would showcase a prominent growth rate during the forecast period, due to various supportive measures taken by a private organization, local governments, & federal officials to encourage the adoption of the electric vehicle.

The global electric bike market size is expected to reach $73.2 billion by 2026.

There are several reason that cause high demand of this market one of them is enforcement of government norms to support the usage of electric bikes.

The Asia Pacific market dominated the Global Electric Bike Market by Region in 2019.