The Global Distributed Control System Market size is expected to reach $23.8 billion by 2027, rising at a market growth of 5.6% CAGR during the forecast period.

A digitally automated industrial control system (ICS) that utilizes geographically distributed control loops throughout a factory, machine, plant, or control area is known as a distributed control system. This system is used to improve the safety, cost-effectiveness, and dependability of industrial processes. Moreover, in the manufacturing industry, this is generally employed in continuous or batch-oriented applications. Agriculture, chemical plants, petrochemical (oil) and refineries, nuclear power plants, sewage treatment facilities, water treatment plants, food processing, and automobile manufacturing are some of its potential applications.

Because of rising energy consumption and government investment, the power industry plays a critical role in a country's economy. In addition, continuous access to energy at an affordable price is required to preserve a society's quality of life and economic development. Moreover, renewable energy generation is making a significant contribution, which will help meet the rising energy demand. Furthermore, technological advancements are critical in integrating power in power stations.

DCSs (distribution control systems) are critical in the manufacturing industry since they control and manage processes. In addition, a dedicated controller controls each process element set of machines in DCS. DCS is made up of a large number of local controllers located across the plant control area, all of which are linked by a high-speed communication network. Data acquisition and control functions are carried out in a DCS control system by a number of DCS controllers, which are microprocessor-based units spread across the plant functionally and geographically. 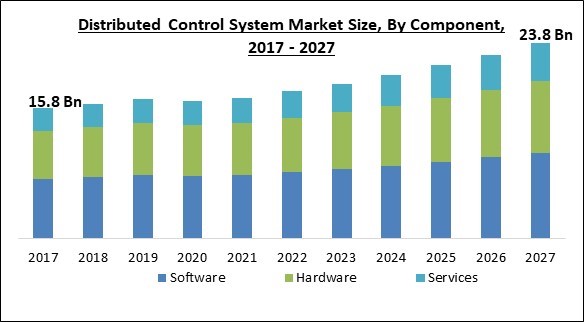 The COVID-19 pandemic has wreaked havoc on a number of sectors throughout the world. Various businesses, including manufacturing and information technology, were hampered by the strict lockdown conditions. While essential industries like fast-moving consumer goods (FMCG) and pharmaceuticals have to continue operating. Various large building projects, including airport expansion and modification, were also delayed as a result of the pandemic, particularly in the United States and Canada. Because of favorable government policies to encourage innovation and develop infrastructure capacities, North America is known for having the highest rate of adoption of sophisticated technologies.

As a result, every issue influencing the region's industrial performance impedes its economic progress. Due to the COVID-19 pandemic, the United States is currently the world's worst-affected country, prompting governments to put a number of restrictions on industrial, commercial, and public activities in the country in order to curb the transmission rate.

The global demand for power has been steadily increasing, resulting in significant investments in power generation capacity, particularly in places such as the Middle East, Asia Pacific, and Europe. To fulfill the rising need for power, investments in conventional power generating in Middle Eastern countries such as Egypt and Oman, as well as renewable power generation in the Asia Pacific and African countries such as China, India, and South Africa, have been increased. Renewables might account for 60% or more of many countries' total final energy consumption, according to the International Renewable Energy Agency (IRENA) (TFEC). For example, China's renewable energy contribution in its energy use might rise from 7% in 2015 to 67 percent in 2050.

Because IIoT has given rise to a new generation of automation systems with unequaled capabilities and extensibility, decision-making is based on more accurate real-time data. With a leaner and flatter architecture, these systems are projected to play a key role in industrial automation and control, bridging the gap between operational technologies (OT) and information technologies (IT). Emerson, for example, provides a wireless IIoT-based solution that allows for quick access to distributed control systems and maintenance data, lowering total operational expenses over time.

Distributed control systems and programmable logic controllers have different applications and end-user industries. On the other hand, as both technologies have advanced at a rapid pace, the obvious disparities between them have decreased. In addition, similar system architectures and components are increasingly being used in both technologies. As a result, a hybrid structure has emerged that combines the best of both technologies, is 7-8 times less expensive than a distributed control system, and is determined to be cost-effective up to specific input/output (I/O) handling capacities. Moreover, local players have been providing such alternative systems at a low cost which is quite attractive for many enterprises with low-budget. 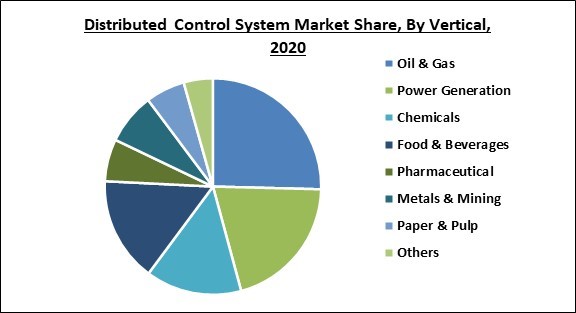 Based on Component, the market is segmented into Software, Hardware, and Services. The Hardware segment collected a significant revenue share of the Distributed Control System Market in 2020. This is due to the rising installation rate of controllers to monitor individual operations in industries and plants. Moreover, controllers, I/O interfaces, power supplies, servers, remote workstations, and relay some of the hardware components. The DCS architecture is made up of a variety of components, including valves, actuators, motors, and control elements.

Based on Vertical, the market is segmented into Oil & Gas, Power Generation, Chemicals, Food & Beverages, Pharmaceutical, Metals & Mining, Paper & Pulp, and Others. The Power Generation segment obtained a significant revenue share of the Distributed Control System Market. This is because of rising energy demand, which is leading to increased use of renewable energy. Power generation is a consistent manufacturing process in which several operating units, some of which are located far apart, must work together to efficiently transport electricity to customers. The DCS system is placed in the power plant to centralize control and monitoring of the entire facility in one location.

Based on Application, the market is segmented into Continuous Process and Batch-oriented Process. In 2020, the Continuous Process segment acquired the maximum revenue share of the Distributed Control System Market. This is because the continuous production process is one of the most efficient and profitable ways of production in the oil and gas, chemicals, power generation, and water and wastewater treatment industries. The continuous process segment is being driven by the use of distributed control systems in nuclear and renewable energy sectors in the power generation industry, as well as in upstream and downstream activities in the oil and gas industry. Moreover, the continuous process is a form of production in which the process is carried out without interruption and is commonly used when generating big quantities.

Based on Regions, the market is segmented into North America, Europe, Asia Pacific, and Latin America, Middle East & Africa. In 2020, Asia Pacific emerged as the leading region in the overall Distributed Control System Market. The regional market is predicted to expand due to a flourishing power sector and expanded power generation capacity around the world, as well as expanding industrial infrastructure and increased usage of renewable and nuclear energy for power generation.

The major strategies followed by the market participants are Product Launches. Based on the Analysis presented in the Cardinal matrix; ABB Group, Siemens AG, Honeywell International, Inc. and General Electric (GE) Co.  are the forerunners in the Distributed Control System Market. Companies such as Rockwell Automation, Inc., Toshiba Corporation, Azbil Corporation are some of the key innovators in the Market.

The global distributed control system market size is expected to reach $23.8 billion by 2027.

Thriving power industry and increased capabilities of power generation are driving the market in coming years, however, High availability of cheaper alternatives limited the growth of the market.

The Oil & Gas segment has acquired maximum revenue in the Global Distributed Control System Market by Vertical 2020, thereby, achieving a market value of $5.3 billion by 2027.

The Asia Pacific is the fastest growing region in the Global Distributed Control System Market by Region 2020, and would continue to be a dominant market till 2027.