The Global Data Center Networking Market size is expected to reach $40.3 billion by 2025, rising at a market growth of 12.3% CAGR during the forecast period. Robust networking solutions for data centers are necessary as there is no indication of a reduction in the amount of information produced across different sectors. Cloud computing is also anticipated to increase demand for these solutions over the forecast period by the increased use in different industries. Some of the other factors that are expected to drive market development over the forecast era are the increasing trend of data center virtualization combined with the implementation of advanced data center working models.

Networking solutions for the data centers help to optimize resources available and improve the effectiveness of data centres. As such, providers of communication services have already begun to provide advanced capabilities to smart network solutions. The network solutions can streamline maintenance of network, decrease network downtime and simplify troubleshooting processes in the data centre setting. These networking solutions also enable DC carriers to leverage advanced systems, like machine learning, driving market growth during the forecast period. 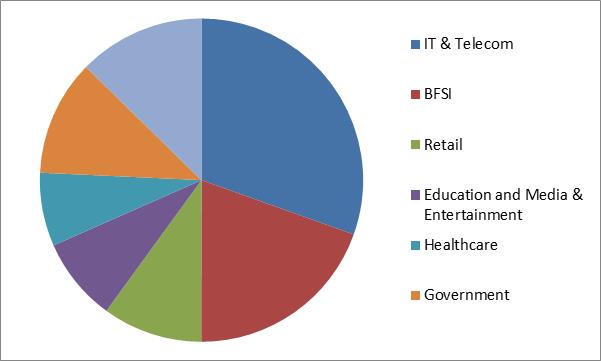 Based on Application, the market is segmented into Storage Area Network, Network Security Equipment, WAN Optimization Equipment, Ethernet Switches, Routers & Application Delivery Controllers and Others. Based on End User, the market is segmented into IT & Telecom, BFSI, Retail, Education, Media & Entertainment, Healthcare, Government and Others. Over the forecast period, the BFSI sector is anticipated to record the highest CAGR. The growing demands for robust data center infrastructure to manage critical user information and secure transactions effectively and safely can be attributed to the growth. Banking groups are especially committed to improving their clients banking experience and continually upgrading their core banking facilities. At the same time, the popularity of digital payment systems and internet trading platforms is increasing. Data center networking solutions would play an essential role in providing mobile payment systems and online trading platforms.

Based on Regions, the market is segmented into North America, Europe, Asia Pacific, and Latin America, Middle East & Africa. Major players in Asia-Pacific are increasing their presence. For example, Alibaba Cloud, Alibaba Group cloud computing arm, announced the launch of a second data center in Indonesia in January 2019-just ten months after its first in the nation was inaugurated. Facebook announced in September 2018 that $1bn (S$ 1.4bn) will be spent on building a data center in Singapore, its first in Asia. The facility is scheduled to open in 2022. The building of data centers has peaked in the latest years with the enhanced use of cloud-based facilities, the Internet of Things (IoT) and big data analytics.