The Global Craft Soda Market size is expected to reach $901.2 Million by 2028, rising at a market growth of 5.2% CAGR during the forecast period.

By combining syrup with carbonated water, craft soda is created. Many substances can be utilized to make the syrup, but they are usually all-natural and organic. If someone carbonates water that already contains syrup, a lot of foam will be created, which could harm the carbonation device. 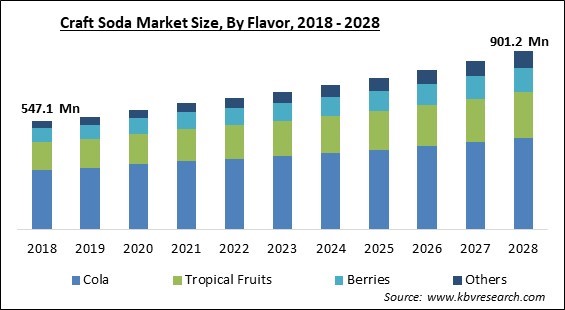 On the other hand, craft soda is produced using organic fruit & plant extracts which are typically raised on nearby farms. The manufacturers in such farms usually produce their drinks in small quantities. And after it has all been sold, another batch will be produced. Additionally, they are often produced with greater care and attention, which results in a healthier soda with a superior taste. The individuals who manufacture them or live in the town where they are made are frequently known to those who consume them.

Therefore, there is a stronger connection between those who produce it and those who purchase it. Comparable to a farmer's market, where one may meet the farmers and learn about the source of the food. On the other hand, very huge corporations that employ thousands of people create sodas in mass quantities. They also require committed experts to manage and organize their activities.

The COVID-19 outbreak and the ensuing protracted lockdown had a significant negative impact on the restaurant & bar industry globally, which in turn had a limited negative influence on the craft soda industry overall. People's drinking habits have significantly changed during the COVID-19 pandemic, moving from pubs and restaurants to their homes. Due to the rising importance of immunity and health, many consumers now favor craft soda over soft drinks and alcoholic beverages since it has more nutritional value.

The increasing interest of young individuals in authentic beverages

Due to the growing popularity of a healthy lifestyle, rising health concerns and the desire of young adults for authentic beverages are driving the craft soda market's expansion. Nowadays, consumers take a holistic approach to well-being and prefer beverages that offer greater health advantages. The trend of functional and healthful beverages is becoming increasingly popular among consumers. Consumers are prepared to test healthier alternatives to conventional soft drinks as they have grown more health conscious. Especially among consumers looking for products with high sugar content as the price for their health, enhanced craft soda is acquiring a strong market position.

Increasing consumer awareness of the hazardous components in soft drinks

The demand for craft soda is expanding at a rapid rate due to rising levels of consumer knowledge regarding the hazardous additives that are used in soft drinks. Sugary drinks like soda have a high concentration of sugar, which raises insulin levels and supports the growth of tumors. Cancers of the breast, prostate, and pancreas may be more likely to develop in people who consume soft drinks colored with chemicals that are also used to flavor and color soft drinks.

The use of soft drinks has been connected to several long-term health issues. The elevated risks are due to the additional ingredients in soft drinks, mainly sugar. However, some sugar-sweetened soft drinks have a couple of grams or more of sugar per ounce serving, which is more than the adult daily recommended limit. The risk of developing metabolic syndrome and type 2 diabetes is significantly increased by consuming one to two servings of sugar-sweetened craft soda each day. All these factors are negatively affecting the craft soda market. 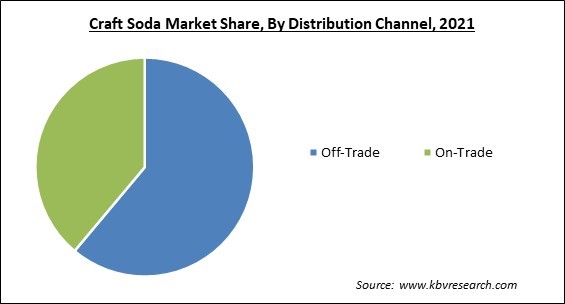 Based on flavor, the craft soda market is segmented into cola, tropical fruits, berries, and others. In 2021, the cola segment dominated the craft soda market with the maximum revenue share. The increased demand for soft drinks with soda among the younger generation and millennials is fueling the sector's growth. The distinctive, novel and non-traditional taste of the cola flavor perfectly satisfies customer demand for novel, inventive, and non-traditional soft drinks. Product producers are now creating a variety of craft sodas with unique tastes and flavors due to growing consumer demand.

On the basis of packaging, the craft soda market is fragmented into glass, cans, plastic and others. The cans segment covered a significant revenue share in the craft soda market in 2021. This is because there has been an increased emphasis placed on environmentally friendly packaging, as well as the rise of additional small-scale independent brewers. Also, the widespread availability of cans in grocery stores and mass merchandisers, in addition to their inexpensive prices, will help the expansion of the market segment.

By distribution channel, the craft soda market is divided into on-trade and off-trade. In 2021, the off-trade segment witnessed the highest revenue share in the craft soda market. The off-trade channel is composed of hypermarkets, grocery stores, convenience stores, supermarkets, discount stores, and e-commerce websites in a significant majority. These supermarkets are essential distribution channels for bringing created beverage goods to end consumers and are among the main retailers that carry craft sodas.

Region wise, the craft soda market is analyzed across North America, Europe, Asia Pacific and LAMEA. In 2021, the North America region registered the maximum revenue share in the craft soda market. This is due to a rise in mainstream retailers, rising health concerns, and a shift in consumer preferences toward healthy drinks. The regional market is predicted to be driven by the rising need for a variety of craft sodas from these regions. The demand for various types of crafted beverage products is anticipated to increase as a result of an increasing number of product releases and developments in packaging and labeling technology.